Spring arrives a little earlier in Cornwall than elsewhere in England. The far South West is blessed with a mild, maritime climate which ensures the county rarely experiences extremes in temperature, although they are not unheard of. In the summer Cornwall never feels quite as warm as elsewhere and in the winter frosts seldom bother gardeners, at least not near the coast. Such benign conditions invite all sorts of exotics to flourish as if they were native to our shores: it’s not unusual to stumble upon groves of New Zealand pittosporum (Pittosporum tenuifolium) or Chilean myrtle (Myrtus luma / Luma apiculata), or to discover a woodland pond choked with Brazilian giant rhubarb (Gunnera manicata). Montbretia (Crocosmia masoniorum) from South Africa makes its home in Cornish hedges and ditches, whilst Agapanthus africanus might even spring from sand dunes in the Scilly Isles. Banksias, proteas, aeoniums and phormiums can often be spotted, but the most common interloper is the camellia, originally from from the Himalayas east to Japan and Indonesia, which can be found growing in all but the most unloved Cornish gardens.

The picturesque village of Gulval near Penzance enjoys an elevated position overlooking Mounts Bay. Facing south, the fields above the village are used to cultivate daffodils, whilst those just a stone’s throw away are home to the National Dahlia Collection. The farmland in this area is blessed with the perfect conditions for cultivating flowers, although closer to the sea an ugly stretch of supermarkets and warehouses blights the coastline and obscures the view back towards the village. Situated at Gulval’s heart, where one might normally expect to find the open expanse of a village green, is a solid granite church. The building is dedicated to a 6th Century saint named Gulval, the original form of which was probably Welvela or Wolvela, names which sound like brands of vitamin and hosiery respectively. Either way I am sure he or she was devout and deserving of such a beautiful memorial.

Gulval’s churchyard is defined by a roughly circular wall punctuated by sturdy lychgates. A road runs unbroken around the perimeter. Inside is a treasure trove of plants, including a spectacular podocarpus (I suspect P. salignus), several stands of bamboo, Chusan palms and a number of mature, healthy camellias. On the day after my birthday, January 13th, every camellia was in bloom, with signs of greater abundance to come. The churchyard is well maintained and must be even prettier in spring when the sward is peppered with primroses. Gulval is not far from great gardens at Godolphin, St Michael’s Mount, Trengwainton and Trewidden. I suspect many of these beautiful camellias were gifted by those estates, or acquired from the nurseries that supplied them. The history of Camellia growing in Britain is intricately entwined with the county of Cornwall thanks to combination of the mild climate, high soil acidity and the attentions of ardent plant collecting families such as the Williams’ at Caerhays Castle and the Bolithos at Trengwainton and Trewidden. By crossing Camellia saluenensis with Camellia japonica John Charles Williams created the hardy Camellia × williamsii hybrids, such as ‘St Ewe’, which are vigorous, floriferous and more tolerant of cold than some of the species. 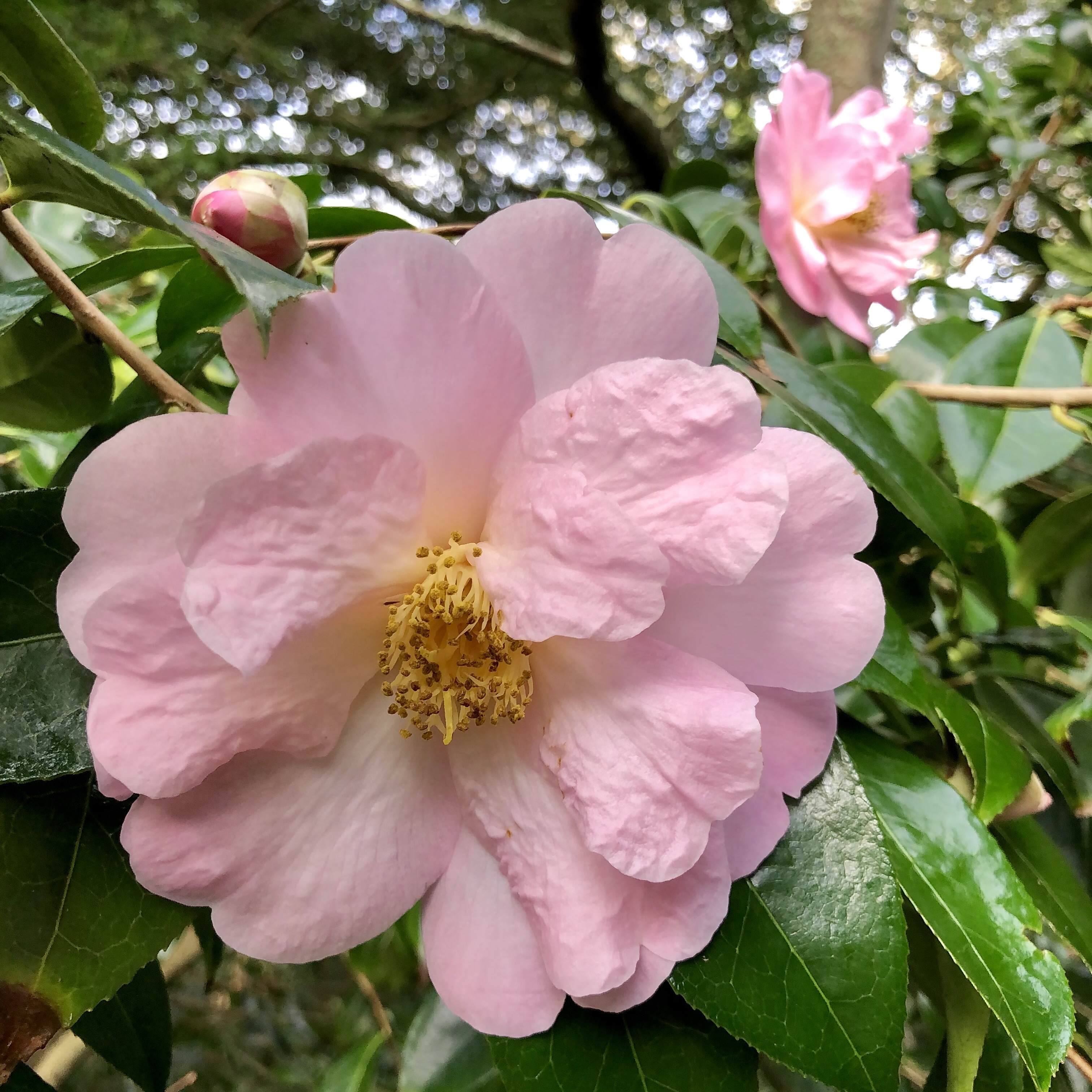 When one spies a camellia flowering on a dull, dank midwinter’s day it is easy to appreciate their appeal. For the most part camellias grow slowly to form small-to-medium-sized bushes clothed in glossy, green foliage. This neat habit ticks a lot of boxes for gardeners, since little or no pruning is required and the plant looks presentable year-round. Flowers can appear at any time from late autumn until late spring, depending on the species or variety, but often start appearing in late winter when very few shrubs provide serious colour. It’s the sheer size, delicacy and voluptuousness of the bloom that dazzles me. It seems wrong that any flower so tender and flamboyant should be capable of surviving in winter. In that respect camellias are remarkable and worthy of greater admiration.

Unlike rhododendrons, which also insist on high soil acidity, many camellias will grow happily in a large pot for a long period, making them suitable for almost any garden. I have grown a number of camellias over the years and they’ve always lasted well provided they are kept regularly watered and fed. Moisture is essential since summer drought can cause buds and leaves to drop, limiting the floral display the following season. Originally considered to be too tender for outdoor cultivation (hence the gracious camellia houses at Chiswick House and Wollaton Hall), modern camellia hybrids are now hardy enough in most of the country. Early buds and flowers may be blighted by frost, especially if cold is accompanied by rain. White-flowered camellias have a tendency to hold onto their spent flowers when they turn rust-brown, which is can ruin the countenance of a plant in full bloom.

Planted in the garden and left to mature, camellias can reach a considerable size, so they should be planted a good distance apart to avoid the heart-breaking possibility of having to thin out established plants later on. Camellias wont tolerate lime, so in areas like East Kent, where I live, the only option is pot culture. Use a good, moisture-retentive ericaceous compost and feed regularly with a liquid feed formulated for acid-loving plants.

As harbingers of spring there is no shrub to rival the camellia for colour or extravagance. Indeed if one were to award to epithet of ‘Christmas Rose’ to any plant, it ought to be the camellia rather than the hellebore. To my mind no garden, great or humble, ought to be without a camellia, either planted in a pot or border close to the house, as a backdrop to a mixed border, or dotted throughout a woodland garden. The value they offer the gardener and admirer is beyond measure. TFG.

30 thoughts on “Camellias: Harbingers of Spring”

Wonderful day yesterday; lots of lovely visitors came to the garden and we had so much fun talking to them. The garden looked the best it’s looked this year, definitely peaking at the right time.
At the end of a hectic day, no dahlia could be more soothing to contemplate than ‘Normandie Wedding Day’, a delicious, blush-pink, fimbriated dahlia. Thankfully its exquisite blooms are tolerant of poor weather - an absolute bonus this summer.
It was a nail biting day yesterday as we weathered the tail end of Storm Evert, but the garden pulled through. Much tidying up and sweeping required this morning before we open at 12pm.
There was only one conceivable choice for today’s dahlia of the day. ‘Myrtle’s Folly’ has everything going for it - exuberant colour, laciniated petals giving each bloom a full, fuzzy appearance, and large, luscious blooms on long stalks. Just a little bit besotted.
The Jungle Garden from above.
Dahlia ‘Doris Day’, a small, catus-flowered dahlia with cardinal red blooms produced in profusion. A good dahlia for the border, not too big, not too small. Would look smashing combined with purple or bronze foliage plants, including Dahlia ‘Karma Choc’.
Loading Comments...
%d bloggers like this: