When I moved to The Watch House in 2006 the garden was mainly crazy paved, with a small air raid shelter and the original outdoor toilets. The two fishermen’s cottages to which they belonged had been knocked into one in the late 1970s, and this is now my permanent home, having been a weekend retreat for eleven years. The previous owners had made a cheerful little garden using pots and hanging baskets; for the first two summers I followed suit, rescuing a large pink hydrangea, filling the shady corners with potted hostas and the sunny corners with standard olive trees, lavenders and geraniums. 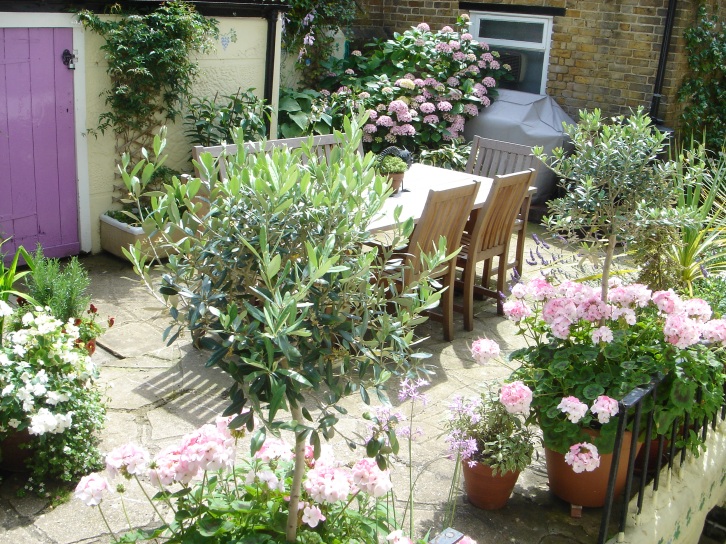 In the early years we chose pastels for our sunny courtyard

Looking down from the top floor bedrooms, the remains of a very dubious DIY hot tub can be seen on the roof of the air-raid shelter. I never used it, although it was very popular with the local seagulls. Broadstairs, along with neighbouring Margate and Ramsgate, was frequently used by WWII German bombers as a depository for any unused ammunition before returning home, so a bomb shelter was a wise precaution. One of the outdoor toilets still functioned until the day it was demolished. 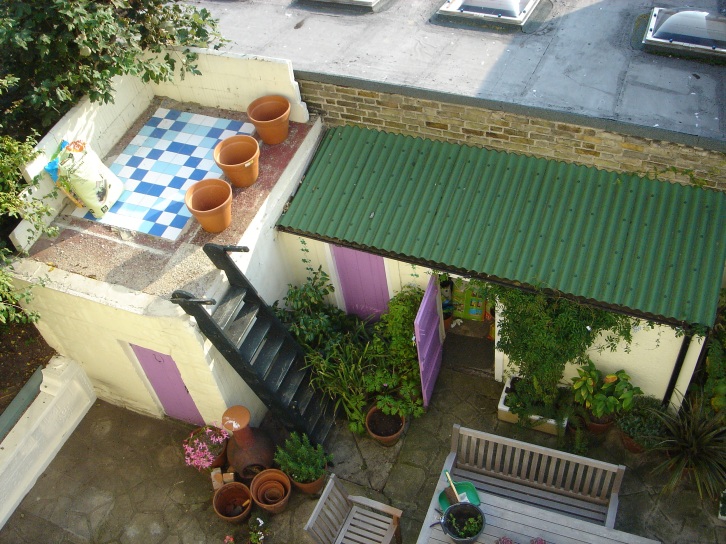 However hard I tried the garden wasn’t quite what I wanted. After lots of (quite silly) ideas about working the outbuildings into a new design I was persuaded that they had to go. Having frequently used the space for entertaining in the summer I also decided to incorporate an outdoor kitchen into the plan. I had seen these in Chicago on a business trip – huge and built from stone – and thought that if they could do it there, why not in England? A magazine article about designer Wayne Hemmingway had also inspired me with its images of a long outdoor dining table, backed by lush planting and statement lighting.

It had been 10 years since completing my degree in Landscape Management and at the time I lacked the confidence to go it alone with the re-design.  The garden’s situation, above two barrel-vaulted undercrofts, also concerned me.  The last thing I wanted was to end up with the garden collapsing into the cellar!  And so a work colleague recommended a fantastic garden designer called Declan Buckley.  We hit it off straight away, Declan being laid-back and very easy to work with.  It was he who convinced me that demolition was necessary, and so the landscapers began work in April 2008, just as the first and only snow of the year put in an appearance. 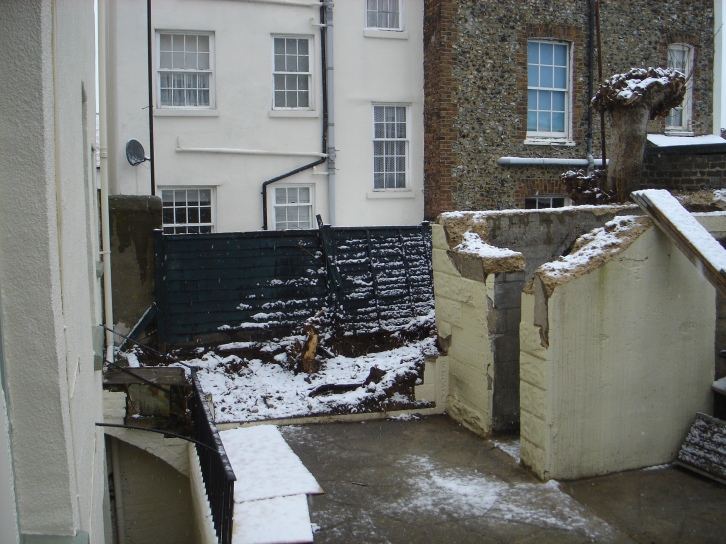 The air-raid shelter took almost two weeks to tear down, causing one or two minor injuries along the way.  In the end heavy machinery was called for to remove this and the trunk of a fairly old sycamore tree.  One of the undercrofts had been used as a rubbish tip for many years and needed to be emptied, revealing all sorts of interesting glass bottles and pieces of blue and white china.  Both were originally used for gutting and smoking fish, their Belfast sinks and smoking ovens still in evidence today.

The transformation had begun and there was no going back. Next to go were the toilet buildings, leaving behind a fairly scrappy looking wall. 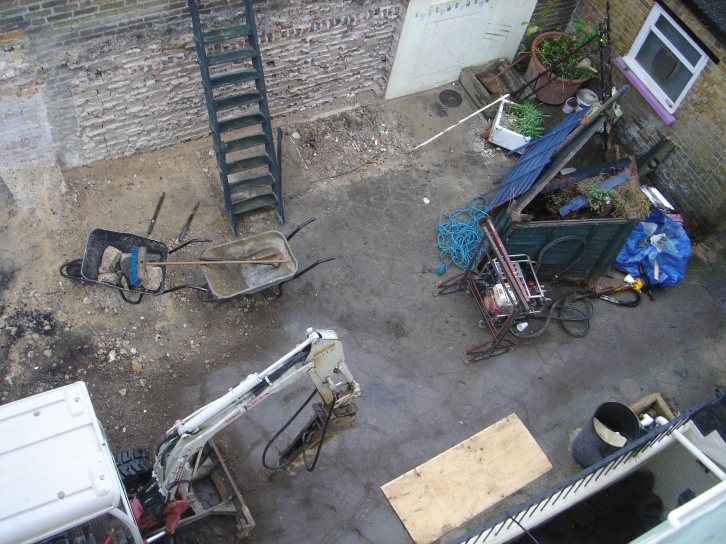 With the site cleared, it was time for construction to begin. Through the front gate came metre after metre of tanalised shiplap cladding which was later primed, undercoated and painted with Farrow and Ball “Vert de Terre” exterior eggshell. I still love this colour which provides a perfect foil for almost any other shade of green. Unfortunately the depth of the framework you can see below meant the south-facing border ended up considerably narrower than we hoped.

The image below shows the kitchen under construction. No-one involved had ever built a kitchen outdoors before and so it was designed by committee and with the help of our carpenter. In most part we got it right, but by taking a shortcut on the work surface (using the same slate slabs as on the terrace), we gave water an opportunity to get in through the joints. The kitchen has also suffered from dampness coming up from the ground – predictable when you look back at this photograph. Next year (2018) will see a few more than necessary repairs.  The black granite worktop I initially wanted but could not afford was installed in 2014, protecting the cupboards from rot.  Miraculously, the water supply (cold only) has never frozen and I put mains gas in to supply the barbecue. The kitchen units also provide shelter for all the garden lighting, which is on a nifty remote control. 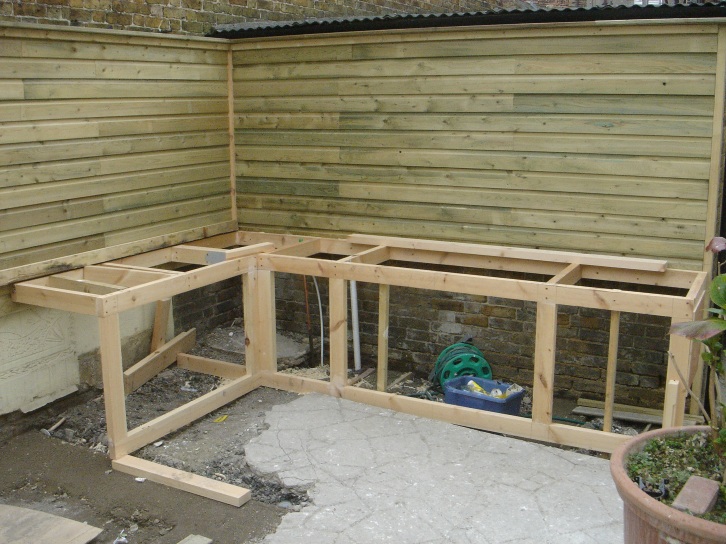 As May 2008 approached our neighbours actually thought I was building a lap pool!  The raised borders were built above solid chalk, but I broke up the ground you can see here before importing several tonnes of topsoil.  This was combined with copious organic matter.  The space in the centre and right is directly above the undercrofts and therefore hollow.  The walls at the front were reinforced to prevent the weight of the soil pushing them outwards. 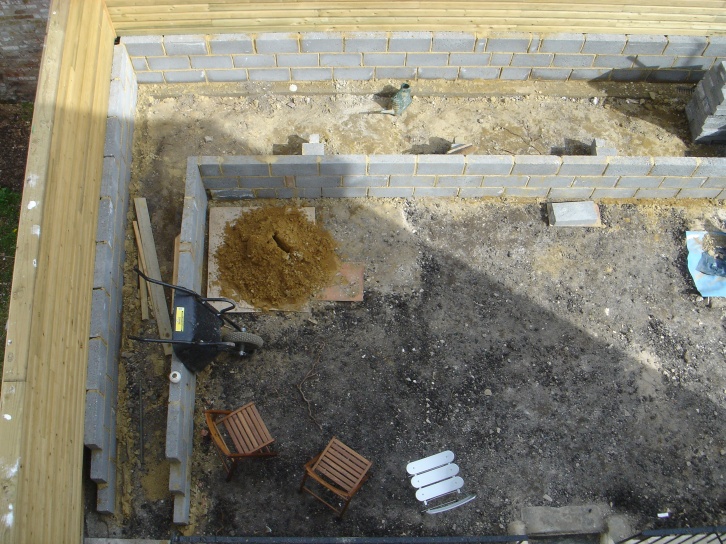 Like all good construction projects we were several weeks behind schedule by this stage, and the plants arrived far too early.  They came on a large lorry, barely fitting down my narrow street.  There was nothing for it other than to take them in and nurture them until the soil arrived.  Apart from one or two refugees from my previous garden, all the plants came from a specialist nursery called Architectural Plants in Horsham, West Sussex.  Although not cheap, the plants were of the best quality and good-sized specimens.  The manager, Christine Shaw, has written a brilliant book called “Architectural Plants” which is my bible for the garden.  It’s essential reading and well worth seeking out (ISBN 0007204701, published by Collins). 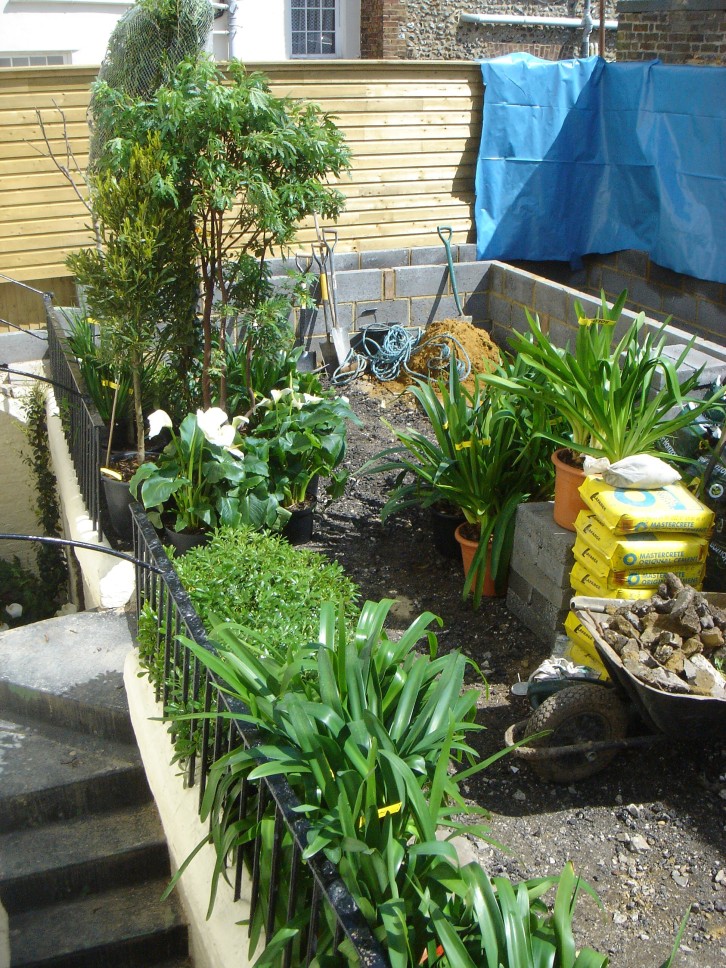 And so, on the hottest day of the year we began planting, before any of the slate paving had been put down.  This is when I could really start getting hands on with the project.  Below, three of us manhandle a beautiful semi-mature Arbutus glandulosa (Mexican strawberry tree) into position in the corner of the plot. It was soon dubbed “the orange drain pipe tree” by my ex partner, owing to its smooth, cinnamon coloured bark.  This rare evergreen tree was our only casualty, dying only a year later from Pythium – a nasty pathogen which causes the plant to collapse and die. It was harder to get out than it was to get in and has now been replaced with an equally unusual but very different tree, Pseudopanax chathamicus (Chatham Island Lancewood).  It’s not recommended to replant with any members the oak or rose family as these might also be susceptible to Pythium. 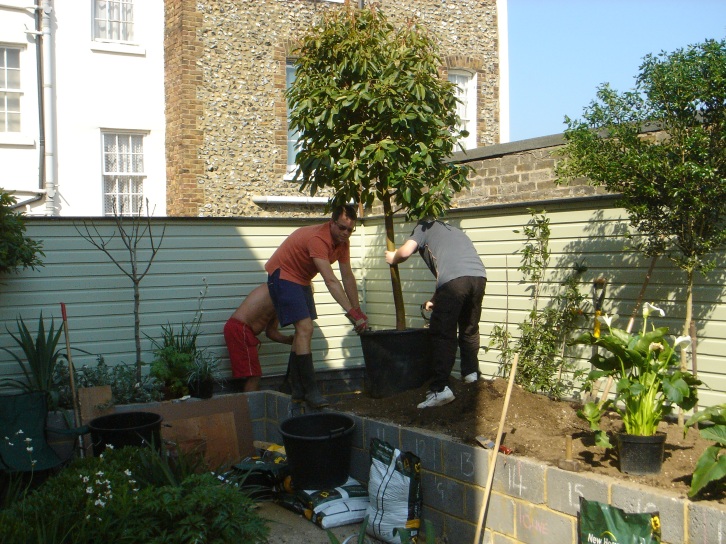 With the plants safely in the ground and the kitchen half completed it was time to christen the barbecue.  The shiplap was all painted on site but the gate, cupboard doors and planters for Agapanthus were all carefully painted in our decorator’s conservatory and brought to site. 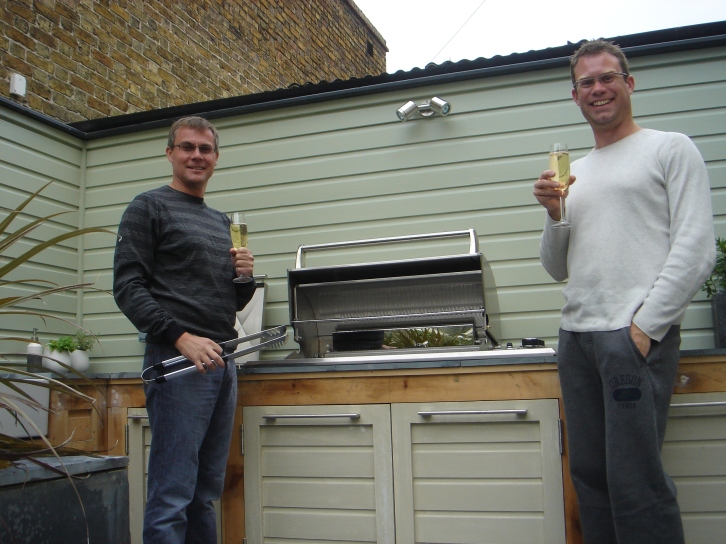 All that remained was for the paving to be laid.  We used large slate slabs imported from Brasil and these were butt jointed to create a smart, clean-looking surface.  This turned out to be a mistake, as the fine joints wicked water down into the previously dry undercrofts – a problem we’ve never 100% solved.  Another tragedy was that the builder decided to drill screw holes into the panels on the sides of the raised beds.  These are now concealed by foliage so don’t distress me quite as much as they did at the time.  The slate was “sealed” with a special solution which rendered it very black and very slick.  Fortunately this effect did not last long and it quickly reverted to a nice soft grey.  The slate acts like a solar panel, warming up quickly in the sun and dispersing heat in the evenings, which the plants (and people) really appreciate. 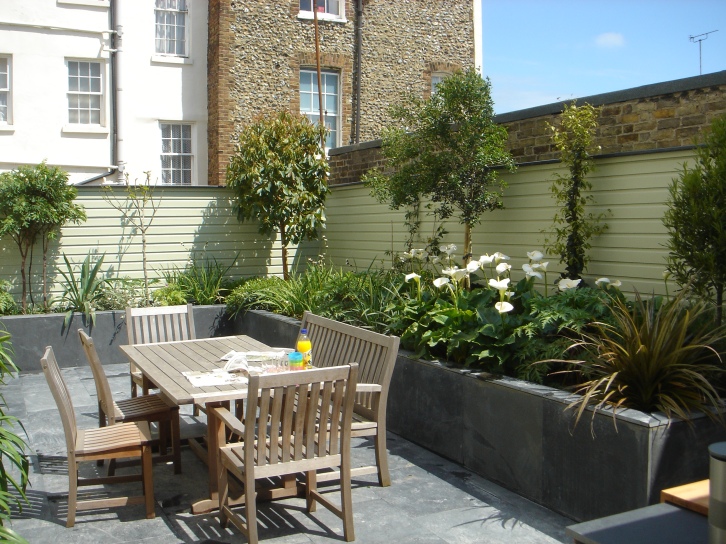 Last to be completed was the kitchen, with a few cheap and cheerful stainless steel accessories from Ikea.  Remarkably these still look as good as new, as do the lights which are from New Zealand company Hunza.  The door furniture and barbecue are all made from marine grade stainless steel, so resist corrosion from the salt in the air.  A pair of wireless speakers mean we can enjoy sounds as well as sights when we’re outside. 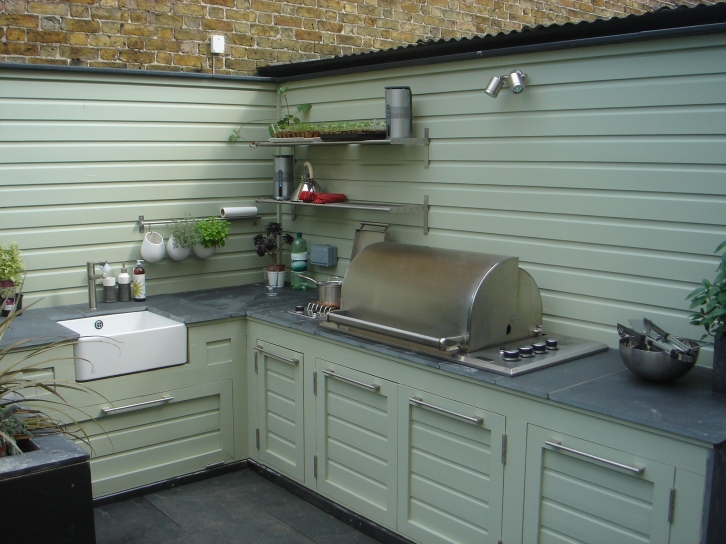 An aerial view in year 2. The Arbutus glandulosa is already ailing in the top left corner, but is disguised by rudely healthy Echium pininana which flowered all year long.  The explosions of pink are Geranium maderense, a plant which offers everything apart from frost hardiness. The palmate leaves can grow to over 30cm wide, so it’s not just about the flowers. 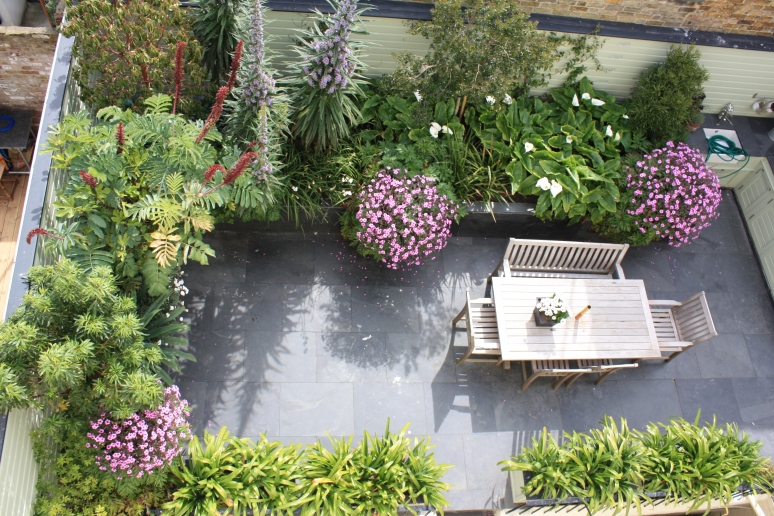 And finally, this is what it was all for.  Two years later I celebrate a birthday outdoors, surrounded by friends and with plenty of Pimms.  Cheers! 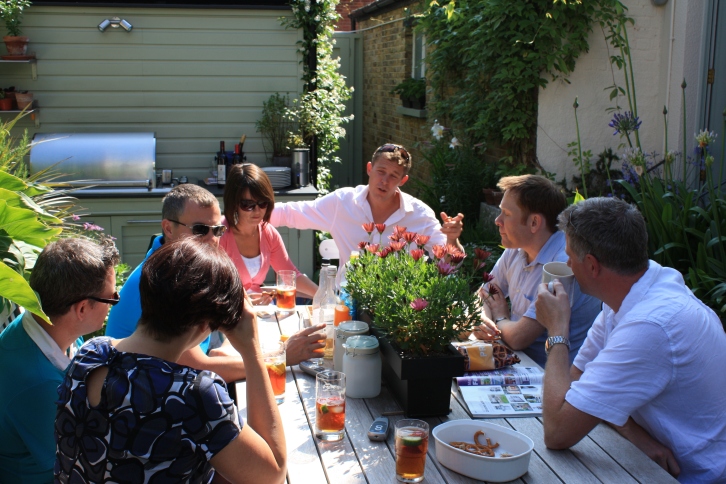