It’s almost 15 months since the Gin & Tonic Garden first came into being. My compact, 20ft x 20ft courtyard is still occasionally referred to as ‘the other garden’, ‘the new garden’ or ‘the back garden’, even though my house has no definitive front or back. When visitors come to The Watch House, the Gin & Tonic Garden receives barely half the attention that the Jungle Garden attracts. Whilst the setting isn’t as appealing and the plants are less mature, the Gin & Tonic Garden is rapidly growing on me. Part of the appeal is that it’s sunny in the late afternoon, which The Jungle Garden is not, and also that it has a completely different vibe – more like a cottage garden where everything has been flung together in a cheerful mix. It’s a collector’s garden in the truest sense – all about the plants rather than the composition. In a year the Gin & Tonic Garden has developed and flourished beyond all my hopes and expectations, especially given that this space was originally envisioned as a glorified ‘bringing-on’ space for the Jungle Garden. There is still a greenhouse for nurturing tender plants, cuttings and seedlings, but the rest of the garden has developed a personality of its own. Any bringing-on or dying-down happens in the narrow passageway that leads to the street, invisible from the house. Not an inch of space is wasted.

Almost everything in the Gin & Tonic Garden is grown in pots. This is because I still have a lot of concrete and rubble to dig out and a raised bed to build. I arrange my containers in such away that it becomes very difficult to see them, creating the illusion that plants are growing from the ground. The soil here is about 6″ deep before pure-white chalk rock is reached. The garden’s boundary, a weather-worn fence, is an eyesore. It pains me to look at its patched and dreary facade each time I look out of the library window. The fence will be replaced with smart slatted panels as soon as I can afford it. I expect this to be transformative for the Gin & Tonic Garden, providing a more effective wind break and a link back to the colours and finishes used in the Jungle Garden.

Sun-loving plants come into their own in the Gin & Tonic Garden, especially during the summer. Bronze-leaved fennel, marjoram, rosemary and chives have grown well, as have echiums, osteospermums, salvias, polygala and olives. None of these would prosper in the cooler, shadier Jungle Garden. The sun doesn’t get far above the surrounding terraces in winter, but there’s shelter enough from the north and east to protect tender plants such as Geranium maderense, which were not harmed by the Beast from the East here, but which perished in the Jungle Garden. The Gin & Tonic Garden is a much better spot for growing dahlias and plants with silver foliage. I am willing Buddleja speciosissima to bloom this year; Senecio ‘Angel Wings’ has prospered and Echium candicans (below) is looking fit as a fiddle despite being grown in a terracotta pot. I’ve also found space for my first grasses, including the beautiful purple sugar cane (Saccharum officinarum var. violaceum) and crimson fountain grass (Pennisetum setaceum ‘Fireworks’). 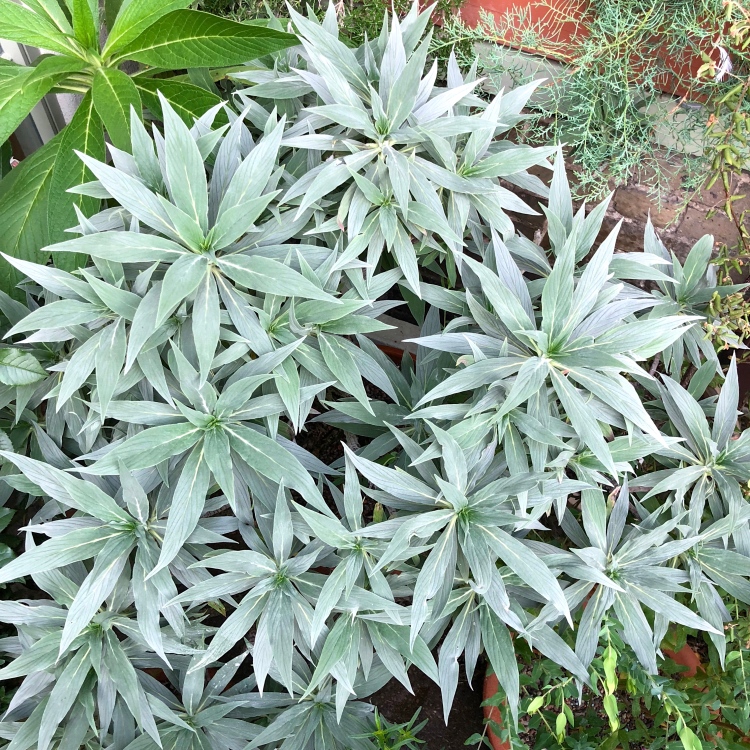 Neither of my gardens has what I’d call a proper water feature, however I have secreted a black plastic barrel in the Gin & Tonic Garden in order to cultivate Thalia dealbata (powdery alligator flag – such an absurd common name) and Cyperus papyrus (Egyptian papyrus). My friends’ two boys were so appalled that I had installed a ‘pond’ without fish that I was compelled to purchase two goldfish, which they named Kyon and Mr Bean. Both appear exceptionally happy in their Lilliputian home.

My first year of growing tomatoes in the greenhouse has been a great success. Since I only have myself to feed I decided to grow a single plant of five different varieties, including ‘Black Opal’ and ‘Orange Paruche’. I removed a fair amount of the dusty, spent earth that was already in the greenhouse border and worked in lots of fresh compost before planting. Apart from a negligible amount of leaf-miner activity the tomatoes have experienced no other ills. I only wish the greenhouse roof were a little higher as my tomato plants were desperate to grow taller. 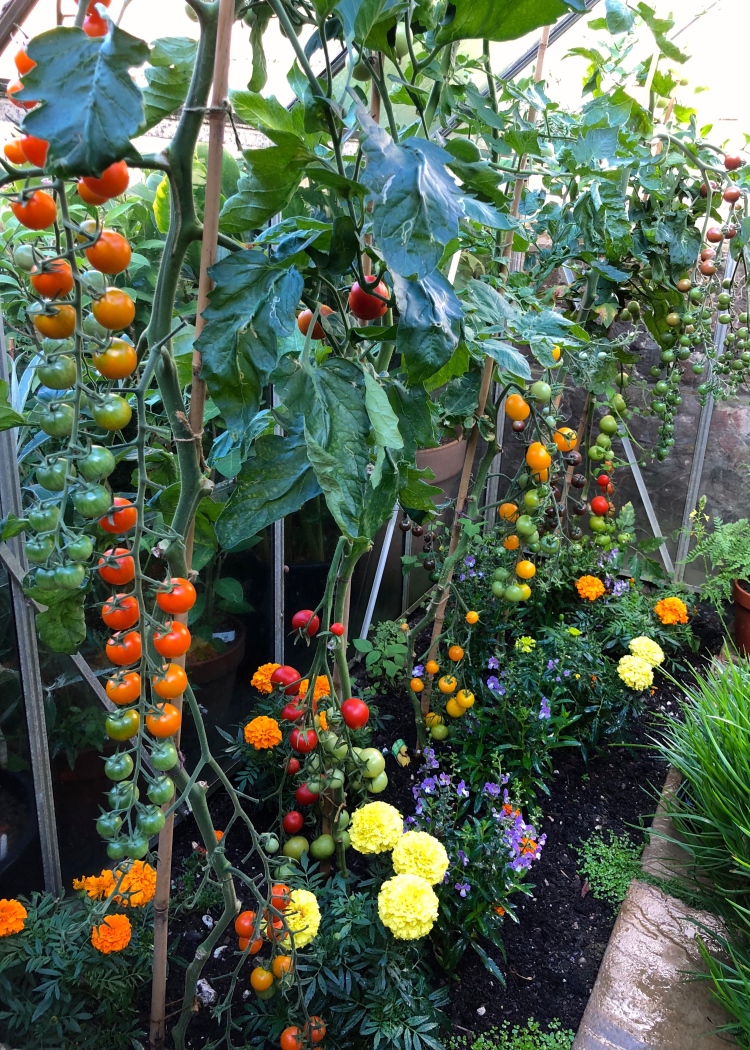 For a year’s work the Gin & Tonic Garden has brought me ample reward. Following the trials of a harsh, late winter, we’ve been blessed with a terrific growing season, helping plants to establish themselves fast. As an addition to the Jungle Garden this new courtyard space has kept me busy and offered fantastic opportunities to experiment. Although I could count the number of gin and tonics I’ve enjoyed on one hand, that’s not really the point. The idea that I could, if I wished to, is enough for me. TFG.

Read Tales from The Gin & Tonic Garden Part I here, and see how much has changed in the course of fifteen months. Looking back at this post I’m surprised myself …. although not by how quickly I’ve managed to fill the space with plants! I hope what these two posts demonstrate is that attractive gardens can be created quickly if there is already some structure to work with, and that it doesn’t take long to start reaping the benefits of your hard work.

24 thoughts on “TALES FROM THE GIN & TONIC GARDEN, Part II”

We’ve officially reached max tulip, so it’s all down hill from here. I’m not sad. The garden has never looked better than it has this spring, in spite of the frost, snow and enduring chill.
Tulip ‘Supri Erotic’: once you get beyond the absurd name and forgive the bulb merchants their grossly inaccurate images you can start to appreciate this complex flower. The outer petals are pale yellow with a chalky white overlay. Each one is tipped raspberry pink, bleeding slowly down as the bloom matures. When open the petals reveal their true, canary-yellow colours.
Hop on over to the Talking Dirty Podcast now for springtime ramblings from @alan_gray_erov @thunderfairy and yours truly. I’ll be cavorting with nude and sexy tulips, whilst Alan and Thordis reveal their FLOMOs (flowers we are missing out on).
Tulip ‘Pretty Princess’; one of the last tulips to bloom but certainly not the least.
Planted just a few weeks ago and already sporting a fabulous flower, this is Clematis ‘Omoshiro’, the name meaning ‘amusing’ and/or ‘white surface’ in Japan. I very rarely go for the large-flowered hybrids, but this one was chosen to scramble through Calycanthus x raulstonii ‘Hartlage Wine’ which it is doing with great aplomb. Flowering at roughly the same time they should eventually put on quite a show together.
It was bright today, but, goodness me, it was blowy. It seems as if the weather is intent on bringing our tulip display to an abrupt close.
Loading Comments...
Comment
×
%d bloggers like this: