Over the weekend we welcomed over 300 visitors to The Watch House, breaking records and surprising us all. At times it was a challenge to fit everyone in whilst offering an enjoyable experience in the garden, but there were no complaints, at least that I heard. On both days the sun shone, the birds sang and many plants were at their most splendid. I was content. It was wonderful to meet so many keen gardeners and admirers of gardens; many local, some having made trips from much farther afield. The friends who volunteered to make cakes, brew tea, wash up, sell tickets and answer questions did a sterling job. Even a tiny garden like mine requires six or more helpers to be able to open successfully with refreshments; I could not have done it without them. Other friends travelled down from London, Essex and Suffolk to see the garden, which was a wonderful surprise. Thank you to everyone for the tremendous support, encouragement and positive energy you bring with you.

I stationed myself in a corner by the sink where I could greet people on their way into the Jungle Garden. Visitors usually take a moment or two to adjust to the riot of colour and foliage that confronts them as they enter from the street. It’s unexpected, and deliberately so. Happily my star jasmine (Trachelospermum jasminoides) had clung onto a few last flowers, providing luxurious scent on arrival. As usual, a handful of plants attracted the lion’s share of the attention. The black rosettes of Aeonium ‘Zwartkop’ were commented on by many. Some had tried growing this handsome succulent before, with varying degrees of success. My advice was to plant in gritty compost (a large pot is not required as they make very little root) and to bring them indoors onto a sunny windowsill in the winter. Unless you live in South West Cornwall they are not hardy and should not be left to the mercy of the elements.

Salvia ‘Amistad’ was widely recognised. I am not surprised as it is an excellent plant and can therefore be found in every garden centre across the land. I have planted a lot of it this year, since the intensely purple flowers echo the tones of Asarina scandens ‘Violet’ and Petunia ‘Night Sky’. Even when one can’t repeat plants for lack of space, repetition of colour helps to hold everything together visually. I was delighted that the star of the show was Solenostemon (coleus) ‘Henna’, firstly because it was purchased locally from Broadstairs Garden Centre and secondly because I want people to think again about coleus. Far from being a plant consigned to the grave with your great aunt, they are superb plants, especially for a shaded courtyard garden. Coleus grow fast and take no prisoners when it comes to showy foliage. There are subtle ones and shouty ones, large-leaved and small-leaved ones; some are ferny, some are serrated. For me ‘Henna’ is the ultimate ‘flame nettle’ with sharply-toothed, Chartreuse-green leaves that are brownish-red on the reverse. Handsome indeed. 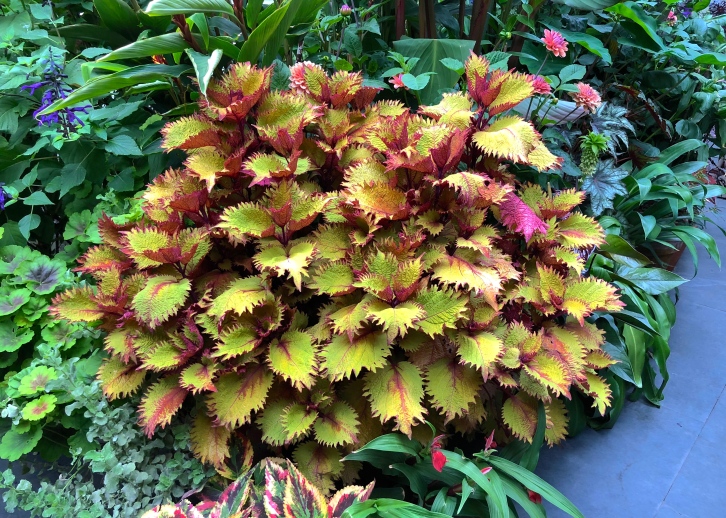 Some visitors were surprised to see plants such as anthurium, aechmea and philodendron growing outside. During a long, hot summer like this one they are perfectly happy outdoors, provided they are sheltered and out of direct sunlight. A single Gloriosa rothschildiana bloom caught many an eye, as did the pot of Egyptian papyrus (Cyperus papyrus) next to the sink. Both are easy and effective plants to grow for height in the late summer garden. 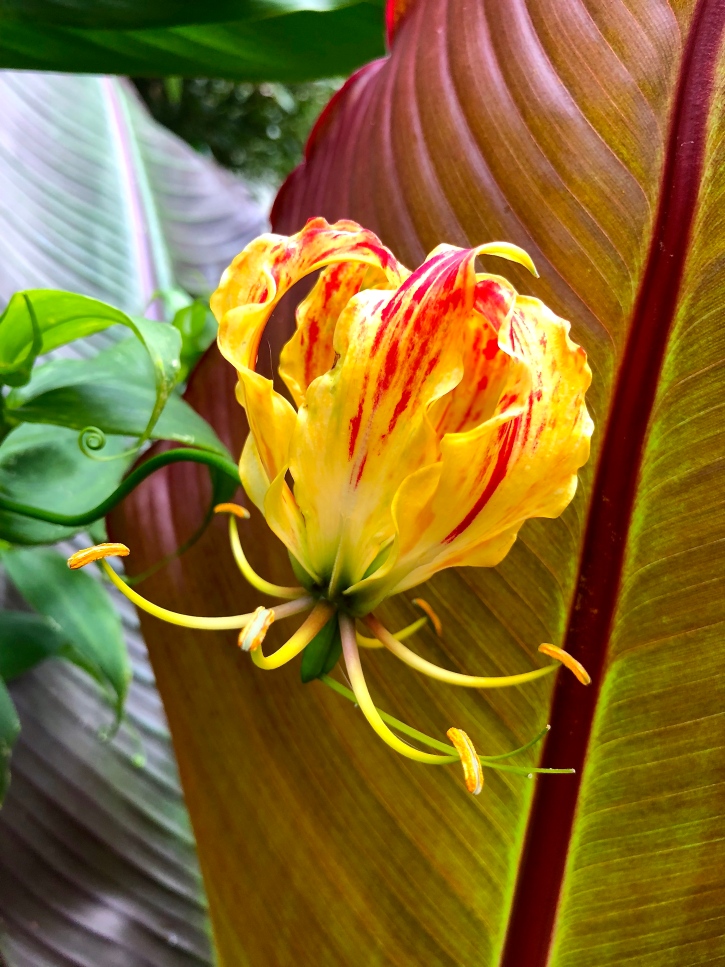 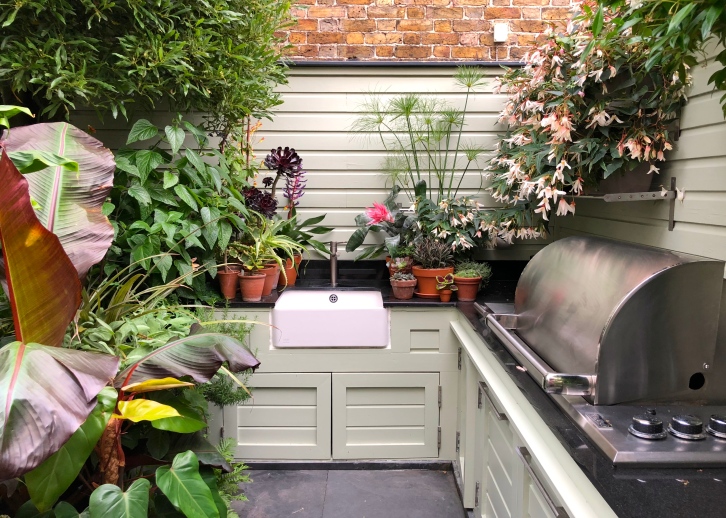 As for me, I was excited to witness dahlias ‘Nicholas’ and ‘Bacardi’ flowering for the first time this weekend: ‘Nicholas’ (below) is the perfect flower form and colour for my garden, and ‘Bacardi’ is promising too, with decadent flowers the colour of polished cherry wood.

Visitors are always flabbergasted that I grow everything in pots or containers. Although I do this out of necessity (there is no soil to plant in here, owing to the undercrofts below the garden) there is much to recommend this way of cultivating plants, especially tender ones. I will be writing more on this subject shortly, so keep your eyes peeled if this interests you.

I regret not spending any time talking to visitors in the Gin and Tonic Garden, although those requiring plants to be identified came back to the Jungle Garden with photographs on their phones. Naturally Dahlia ‘Firepot’ received a lot of attention as it’s looking splendid at the moment, positively smothered in flowers. Senecio ‘Angel Wings’ was a favourite for many because of its soft, velvety, ‘once touched, never forgotten’ leaves. For me it is still a curiosity rather than a nice plant; resembling a very posh silver cabbage. Another oddity, if I can call it that, is Cordyline ‘Pink Fantasy’, a plant which takes the dramatic variegation of C. ‘Torbay Dazzler’ to a new level …. by adding Barbie pink. This shocking colouration may become monstrous as it grows, but as a small plant it’s amusing as well as a talking point. I was pleased and flattered that some visitors noted there were colour groupings. I have tried hard at these as I believe they are the only way of justifying such an eclectic array of plants being in the same place at the same time. 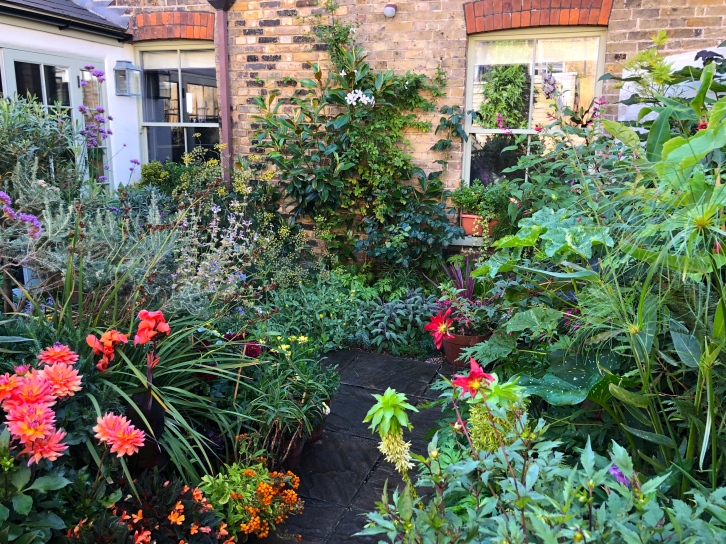 The main thing with the Gin & Tonic Garden is that it’s somewhere to sit at the end of a day where I can enjoy pretty flowers and delicate fragrance. This is precisely what I am doing now. The Gin & Tonic Garden is not a ”designed’ garden in any sense. The fine weather meant that we could open up the garden room where Begonia ‘Martin Johnson’, Eucomis ‘Sparkling Burgundy’ and Tradescantia ‘Purple Sabre’ stole the show. This is where I write. Despite being unfinished decoratively, it’s a pleasing space to work in.

It’s my first year growing tomatoes at The Watch House and I am delighted with the results; they were much remarked upon. I have five varieties, including ‘Sungold’ and ‘Black Opal’, all of which are fruiting prolifically. I am thrilled as I adore tomatoes and will happily eat them with every meal. 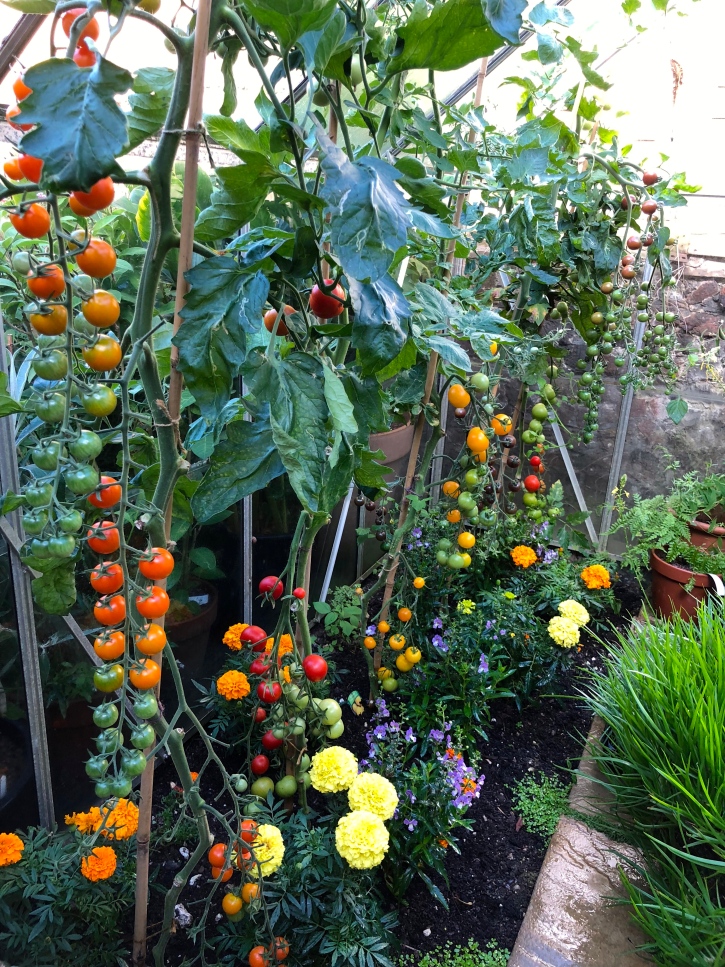 I have yet to count the weekend’s takings, but will update this post as soon as I have. I’m expecting the total to be close to £1,400, which will all be donated to the National Gardens Scheme charities. If you were too far away to visit or otherwise engaged, I hope you enjoyed the little video I prepared pre-opening. As many visitors commented, it doesn’t do the garden justice, but I do believe it’s better than nothing. The Watch House will be opening again next year, on a date to be confirmed. In the meantime here are some of the most frequently asked questions and the answers to them:

1) How long does it to take you to water the garden?

During hot weather the each container needs watering every other day. I alternate between one garden and the other, taking about 1.5 hours each evening, longer if I am also feeding, which I do once a week. I prefer to use a watering can, but will use a hose in the Gin & Tonic Garden if I need to be quick. In the Jungle Garden there is a soaker hose hidden at the back of the raised beds to replace the water that’s drawn up by my trees. This works a treat, allowing me to grow bananas and colocasias in what would otherwise be dry shade.

2) How long have you had the garden?

I moved to The Watch House a little over 12 years ago and completed the build of the Jungle Garden 10 years ago. Nothing remains from the previous layout apart from the boundary lines and the basement railings. The garden has evolved significantly and is now more shaded and sheltered than it was originally. Pale walls reflect light, dark slate retains heat, and trees trap warm air inside the garden creating the perfect microclimate for tender plants.

The Gin & Tonic Garden was begun just over 12 months ago and is a work in progress.

3) What’s the name of the tree with the wonderful red bark?

In three words: Lyonothamnus floribundus ssp. aspleniifolius – Santa Cruz Ironwood if you find that easier to recall! This unusual tree comes from a series of rocky islands off the coast of mainland California. It is tolerant of poor, stony, well-drained soil, salt spray and wind. It has much more to recommend it than the peeling reddish bark. It also has ferny foliage and heads of white flowers like an achillea in mid summer.

No! Don’t trust the common names of plants. I rarely use them as they are often highly misleading. The ‘jasmine’ being referred to was Trachelospermum jasminoides (star jasmine), which is closer in relation to a vinca or a plumeria (frangipani) than it is to a jasmine. Both Laurus nobilis ‘Angustifolia’ (narrow or willow-leaved bay) and Phillyrea latifolia (Japanese green olive) were mistaken for being olives (Olea europea). Neither are, but it’s an easy mistake to have made given the foliage and tree shape.

5) Where are the gingers then?

Despite there being over 55 flower spikes, my gingers were frequently missed, perhaps because the plants are so tall and leafy this year. Some gingers have flowered incredibly early this year, especially Hedychium yunannese, H. ‘Stephen’ and H. ‘Sorung’. Happily I have over 10 other varieties that haven’t flowered yet, so I have these to look forward to. ‘Tara’ is flowering now, and ‘Helen Dillon’ will follow. Sadly gingers do not bloom for long, but when they do, they are stunning and the fragrance intoxicating. TFG.