There is something especially delightful about going on a holiday that one hasn’t organised. Perhaps it’s the element of surprise, or the ability to shirk responsibility for anything that goes awry. Either way one can sit back and – quite literally in the case of my recent holiday – enjoy the ride.

I am a bit of a control freak and tend to take charge of arrangements rather than endure that queasy feeling I get when someone else is holding the reins. So usually I’m chief organiser. However when it came to planning a trip to Disneyland Paris I had to concede that my lack of expertise in anything child / Disney / princess related made me a very poor choice of tour leader. My sister took up the challenge uncontested and did an excellent job. Everything went perfectly smoothly; even the weather was kind to us. There were moments when I struggled not to wrestle back control, but on the whole I was happy to go with ‘le flux’. 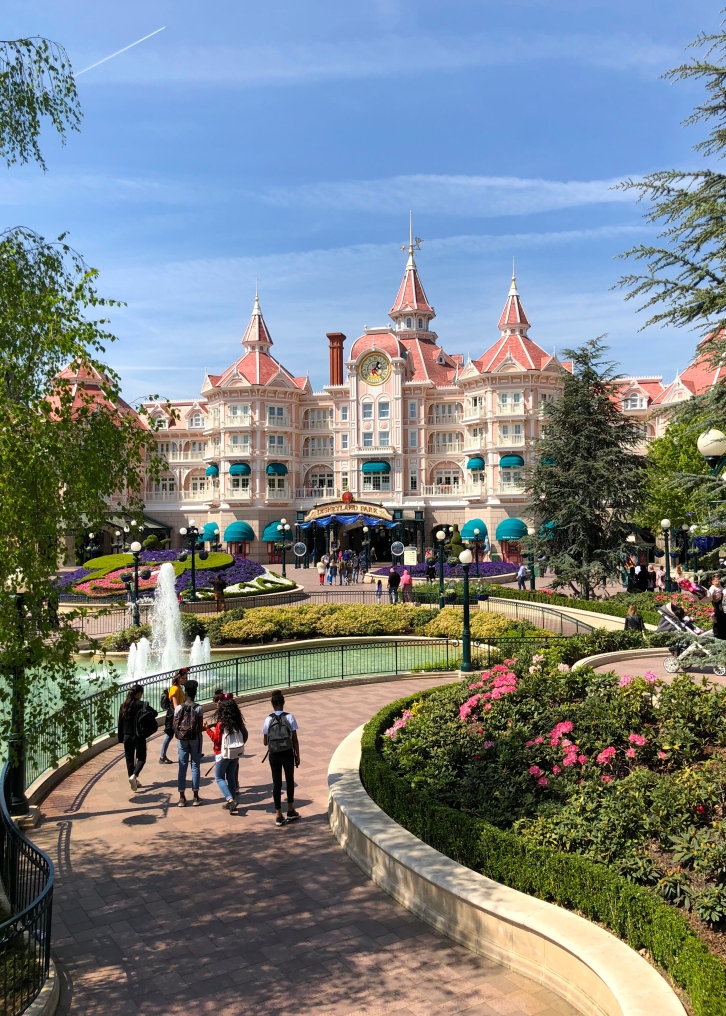 I had no preconceptions about what I might discover in terms of plants and landscaping at Disneyland. In fact I hadn’t given this aspect of my holiday a second thought. If I had, I might have expected some fairly decent, park-style planting – mature trees, manicured shrubs and lashings of cheerful carpet bedding – and I would have been right on all counts. What I would not have predicted is how plentiful and pleasant the landscaping would be, nor how carefully it would be tailored to each of the park’s themed ‘lands’. The longer I spent at Disneyland Paris the more details I noticed and the more impressed I was. 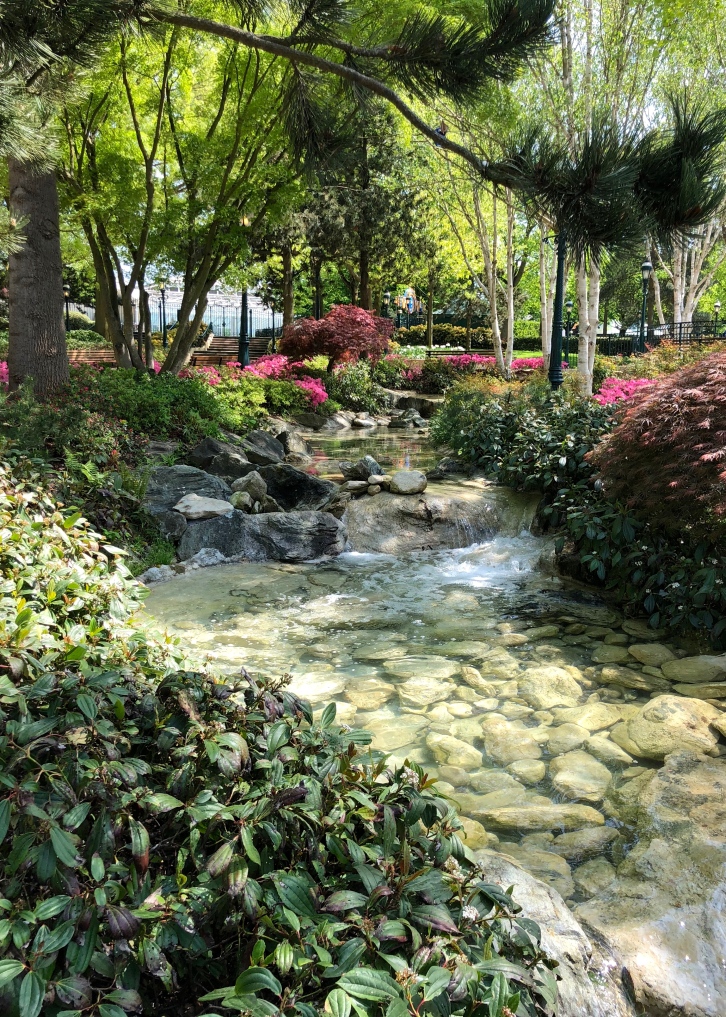 By the end of the first day I realised that everything I knew about Disney films could be written on the back of my entrance ticket. Somehow I never have the time or inclination to watch films, probably because I am always in the garden. Hence every time I asked a question about this character or that, a look of utter horror would pass across my four year old niece’s face, followed by the familiar exclamation ‘Silly Uncle Dan!’ There are things an uncle should just know – latin plant names are not among them. It quickly dawned on me that I was probably the only person vaguely interested in the park’s plants, save for a Japanese family I spotted scrutinising an especially fine rhododendron near our hotel one morning.

Disneyland Paris is twenty-five years old this year and much of the landscaping is reaching maturity. I read somewhere that thirty years is all it takes for a garden or park to appear fully fledged and I’d say Disneyland has a few more years left to go. Nevertheless the park’s original designers must feel extremely proud to see their vision realised, especially in spring when everything is bursting with vitality.

The first thing one deduces is that the soil must be acidic, permitting lavish use of rhododendrons, azaleas, pieris and skimmia. I love to see these under-appreciated shrubs used for landscaping as they suit being planted en-masse. Why plant a laurel or a viburnum when you can choose one of these flamboyant beauties? Underplanting graceful acers and hornbeams, they exude the class one associates with the US Masters course at Augusta and the style of a Japanese inspired garden.

The second nuance one notices is that flowers are limited to the colour palette of plastic childrens’ toys – all shades of pink, white, lilac, violet-blue and occasionally red, orange or yellow. There appears to be a big focus on spring-flowering shrubs, perhaps because summer colour is provided by bedding. In autumn the park’s acers must be an absolute picture.

Mature hawthorns, rhododendrons and spring bedding flank the entrance to the Disneyland Hotel

Within the park, plants are used primarily for storytelling, whether it be vines espalier-trained against Cinderella’s house, lofty bamboos sprouting from behind Jack Sparrow’s galleon (The Black Pearl, that much I did know) or bright pink Judas trees flanking a Wild West saloon. Most visitors will not consciously notice these touches, but subconsciously they greatly enhance the sense of place that the park’s designers were trying to achieve. On top of that, appropriate choices of flowering and foliage plants introduce seasonal colour as well as disguising the park’s inner workings. No detail, hard or soft, is left unconsidered. From the style of paving to the finish of the timber, everything is thought through. 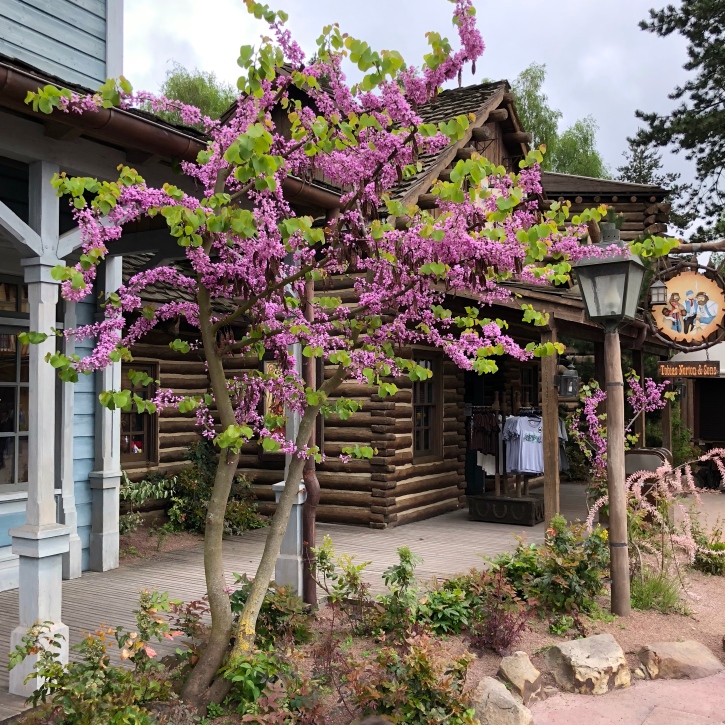 Adventure Isle and The Black Pearl

Achieving the desired look is as much about the maintenance regime as it is about the choice of plant. In places shrubs are tightly clipped to accentuate a curve or lead the eye towards a focal point. In other areas they are permitted to drape, cascade and move freely in order to give an impression of wild abandonment. The whole landscape is carefully calculated and calibrated to heighten the visitor experience.

At the end of my five-day experience I find that most of my preconceptions about Disneyland were affirmed: it’s a little bit tacky, although done so well one has to let it go (you see what I did there?) and inexcusably expensive. Overall, it would not be my bag were it not for the pleasure I derived from spending time with Martha and my sister. But I did heartily appreciate all the effort that had gone into the landscaping, maintaining it well and making the park as attractive to wildlife as it was to humans. Because of that, I can now furnish the other side of my entrance ticket with the list of plants I spotted, which technically doubles what I know about Disney. TFG.

Arctotis ‘Red Devil’ helping to bridge that awkward gap between spring and summer in the Jungle Garden. #arctotisreddevil #inmygarden #thewatchhouse #enseteventricosummaurelli #musasikkimensisredtiger #fuchsiafulgens #persicariaguizhoubronze #iochromafuchsioides #summeriscoming
Last night at the allotment. Almost everything is planted out and growing like billyo, especially our potatoes. Having had no decent rain since lockdown began, we are watering the whole plot every other day, which takes at least two hours. Being in a dry, sunny, elevated spot this will become a routine until the weather normalises - whatever normal is these days! #eveningtime #onourallotment #culmersallotment #plot64a #allotment #growyourown #wateringtime #vegetablegarden #kitchengarden #fruitandveg #thanetlife #livingthelockdowndream
Summertime, and the living is easy. Sap is pumping, and the gingers are high. 🎶 Can it really only be June 1st? #summertime #inmygarden #thewatchhouse #enseteventricosummaurelli #arctotisreddevil #hedychiumstephen #begonialittlebrothermontgomery #persicariapurplefantasy #smallgarden #urbangarden #courtyardgarden #firstdayofsummer #june1st #containergardening
Spanish broom. #spartiumjunceum #beachhuts #weekendwalk #whitstabletoseasalter #spanishbroom #droughttolerantplants #scentedflowers
Summer starts here! Yesterday we spent the whole day moving the Jungle Garden around in readiness for summer. Lots of heave-ho, repotting, pruning and watering. Phase 1 is complete but plenty more to do. In the foreground Musa sikkimensis ‘Red Tiger’. #musasikkimensisredtiger #inmygarden #thewatchhouse #summerscoming #smallgarden #urbangarden #greenoasis #courtyardgarden #microclimate #ngsopengardens #kentngs #geraniummaderense #garden #gardener
There she is! Oh so beautiful: Impatiens tinctoria from the rainforests of Africa. Impatiens tinctoria comes from the higher elevations in central Africa, where the climate is relatively cool. It prefers temperatures between 10-27°C with cooler nights. It also appreciates dappled shade and high humidity making it exceptionally well suited to the back corner of the Jungle Garden. The orchid-like flowers carry a similar perfume to gardenias. All in all, sublime, and this is just the first of many flowers. #impatienstinctoria #inmygarden #thewatchhouse #impatiens #unusualflowers #jungleflowers #dyersbusylizzie #plantcollector #plantaholic #rareplants #plantswithattitude
%d bloggers like this: