Having built myself a library, you would think I’d be spending all my time sitting about and reading. Unfortunately that’s so far from being the truth that I am rather embarrassed to admit it. Even when I have ‘spare’ time, there’s always another task begging for attention; usually a practical one. During my four-hour daily commute, I am either answering e-mails, writing this blog or having a sneaky doze. The only thing I’ve attempted to read on a train in nine months is a copy of The Garden from October 2017, now cowering, dog-eared in the deep recesses of my work bag. It’s not that I don’t enjoy reading, it’s that I cannot rest when I know there’s a job to be done: that’s almost always, as anyone who’s ever owned an old house or a garden knows very well.

Having admitted to not reading enough, you might assume I’d have stopped acquiring new books. Au contraire. I am rapidly becoming a bibliophile on a biblical scale. ‘Put new books away’ is now a repeating reminder on my weekend to do list. I like to complete my lists, so frequently new books go up onto the shelves without me so much as scanning through them. Before I know it they are semi-forgotten, lost between other enticing spines, waiting to be rediscovered, read and properly appreciated.

Yet still the books keep rolling in; at Christmas, on my birthday and picked up cheaply from charity shops as gifts to myself in between times. I glanced innocently at Amazon on Thursday and before I knew it another four books were in my basket, on my debit card and on their way to The Watch House, safe and snug in their cardboard straight jackets. Then on Friday I realised I had forgotten one and bought that too. Oh dear.

To assuage my guilt I have committed myself to perusing at least one book per evening for the next two weeks. Full-on reading is too much to expect, no point setting myself up for failure. Once the evenings get lighter even that ambition will become hopeless, given the garden is a perpetual source of distraction. Here are ten of the books I want to get around to in the next fortnight, all of which have appeared in my library during the last six months:

A large and weighty tome cataloguing von Martius’s 1817-1820 expedition to Brazil and Peru. Here in the tropics the professor of botany at the University of Munich and director of the Royal Botanic Garden collated the sum of all known genera of the palm family. This book is a breathtaking work of botanical illustration and there’s minimal text to distract from the wonderful plates. Easy on the eye and perfect for the plantsman’s coffee table.

A gratuitous purchase, but Taschen were having a half-price sale, what more can I say? There is something fantastical yet primal about a tree house. The weird and wonderful creations featured in this book demonstrate what happens when human imagination is permitted to run riot. The fact that trees are involved is a bonus. Production values are superb, especially the illustrations by Patrick Hruby, so this is going to be hard to put down and easy to get carried away with. 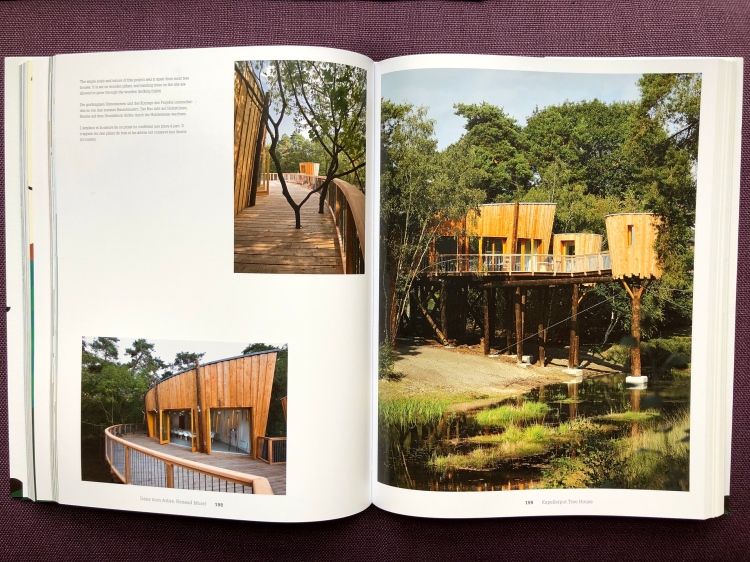 I have been ogling this lovely book since it arrived at The Watch House in late autumn. As one might expect, the gardens featured within are achingly minimal, precisely executed and expensive looking. The extent to which Scandinavian gardens are designed for outdoor living surprised me at first, but then, they do enjoy fabulously long and light summer days. Scandinavian gardens don’t get a lot of air time in the UK, but deserve to be more widely admired. This book will certainly get them noticed.

4) The Private Gardens of England, edited by Tania Compton, Constable

A very generous birthday gift from a dear friend, ‘The Private Gardens of England‘ is undoubtedly a lavish tome, but far more than a coffee table book. Thirty-five private gardens, many of which are not open to the public, are vividly described in the words of their owners. You will recognise some, but not all, and the variety of styles is as extraordinary as the individual gardens themselves.

I’ve become rather rusty in the kitchen department, so I was delighted to receive this book at Christmas. It’s packed with wholesome, simple recipes that are more about taste than looking impressive. I’ve already tried the recipes for tarragon chicken and apple crumble, both of which are excellent and easy to follow. Thanks to them my culinary confidence is starting to return. Arron Bertelsen is the long-standing vegetable gardener and cook at Great Dixter, and offers lots of helpful tips on growing your own for the table.

I would have liked to have read this book before I designed my own library, but alas it was not published until the end of 2017, by which time it was already finished. When my family visited National Trust properties I was always overwhelmed by their magnificent libraries. This beautiful book charts the history of the country house library and reveals that they were not just for show, but for intellectual pursuits and the betterment of friends and family.

Val Bourne has gardened organically all her life. ‘The Living Jigsaw‘ is a genuine and approachable account of how to garden naturally, accompanied by Marianne Majerus’ marvellous photography, practical tips and heavy doses of reality. As someone who will use chemicals when needs must, I am interested to learn techniques that might help to wean me off the nasties and thereby lessen my impact on the environment. Reading this book will be a good start.

Anything written by the excellent Roy Lancaster begs to be read. If it were not so weighty, this is a book I might consider reading on the train. What the author does not know about plants is not worth knowing, and this promises to be a fascinating account of one man’s passion and devotion to plants.

It was Myles Challis that first piqued my interest in exotic gardening with his occasional appearances on BBC Gardener’s World in the 1980s. We tend to associate the late greats Will Giles and Christopher Lloyd with the popularisation of this planting style, but Myles Challis got there first. When it was published in 1988 ‘Exotic Gardening in Cool Climates‘ was heralded as the first book in the 20th Century to be devoted to the subject. I recall thinking Myles Challis was rather dishy, posing moodily beneath a Musa on the back cover. The book looks dated now, but I am hoping it will offer up some forgotten wisdom that I can learn from.

When I was young I used to marvel at the documentaries about barren deserts that would burst into life following a short period of rain. Through this book I will rediscover the incomparable Namaqua Desert and Carrizo Plain, as well as learning about the astonishing natural flora of 22 other countries. Gorgeous landscape and close-up photography makes this book a feast for the eyes. Once read, I know I will be yearning to travel the world in search of such natural spectacles again.

Time to start my challenge. The blinds are down, the fire is lit, there is hail drumming on the windows and a G&T begging to be poured. Where else would one be other than in a library, curled up with a beautiful book? TFG.

Do you have too many books and no time to read them? Which titles have kept you engaged over the winter? I’d love to hear your recommendations and know that I am not alone in my bibliophilia.

And for my next tea break ......
Tea break time! ☕️ 🫖 🍰
I mean, seriously, could there be a sexier tulip? ‘Attila Grafitti’ is what I would describe as shocking pink with beetroot overtones. The blooms shimmer in the sun as if they’d been lacquered. Would look fabulous with another favourite of mine, ‘Orange Dynasty’, which is bright orange and neon pink. Note to self for next year.
The Late, Late Daffodil Show!
Library light.
Happy Friday everyone! What a beautiful morning ❤️💕
Loading Comments...
Comment
×
%d bloggers like this: