If I had made any New Year’s Resolutions, one of them would have been to spend more time appreciating where I live. Folk dream of living by the seaside, but once the dream becomes reality it is all too easy to take the beauty and benefits for granted. I let my regular weekend walks lapse last summer when gardening started to consume every daylight hour, only going down to the beach when I was entertaining visitors. As Christmas approached I had other excuses, but now that the festivities are over I am rediscovering the joys of sand, sea and occasional sunshine in the town sometimes referred to as Stella Maris, Star of the Sea. 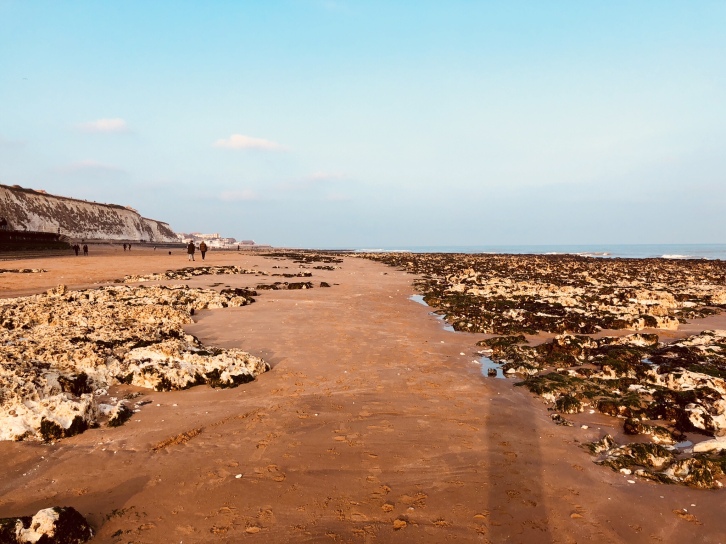 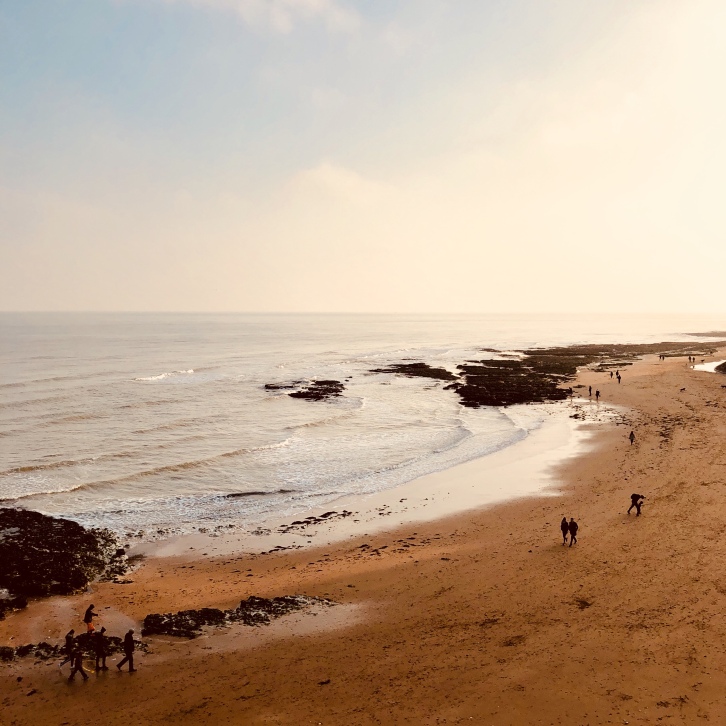 I am not going to say that I am getting a bit old for this kind of shenanigans, but I woke up feeling as inebriated as I did when I went to bed, and my head has been punishing me all day. I had a friend at university who would go on a gruelling run following a heavy night on the town. He swore that it was the best cure for a hangover. I didn’t believe it then, I don’t believe it now, and I have no intention of proving otherwise. However, I do endorse a dose of bracing sea air to clear a sore head.

Having set foot tentatively outdoors after lunch my first task was to let some fresh air into the greenhouse, which was warm after a morning of pleasant sunshine. I tidied up my clematis, had a cursory sweep and checked whether any of the plants growing in pots were getting too dry. Then, with my brain straining against my skull, I ventured down to the seafront, where the entire world appeared to be having an afternoon constitutional. What’s more, for every human being there appeared to be at least three dogs.

Dropping down to the beach to make the most of the sinking sun, I entered a world of golden light and glassy reflections. The sea has stripped away a lot of the sand, exposing rough plinths of white chalk rock. The tide was going out and the waves were small and gentle. On the beach it’s hard to tell what season it is, the air temperature providing the only clue. Walking on my own was a welcome opportunity to take in the timeless scene and re-engage with where I live. Just for a moment, bathed in soft, yellow light, my hangover was forgotten. TFG.

There she is! Oh so beautiful: Impatiens tinctoria from the rainforests of Africa. Impatiens tinctoria comes from the higher elevations in central Africa, where the climate is relatively cool. It prefers temperatures between 10-27°C with cooler nights. It also appreciates dappled shade and high humidity making it exceptionally well suited to the back corner of the Jungle Garden. The orchid-like flowers carry a similar perfume to gardenias. All in all, sublime, and this is just the first of many flowers. #impatienstinctoria #inmygarden #thewatchhouse #impatiens #unusualflowers #jungleflowers #dyersbusylizzie #plantcollector #plantaholic #rareplants #plantswithattitude
Oh I do like to be beside the seaside 🎵 #ohidoliketobebesidetheseaside #inbroadstairs #sunseasand #vikingbay #thanetlife #kentlife #beachlife #malvaarborea #saturdaymorning
My, how you’ve grown! The plants on our front door step have really filled out over the last fortnight and the hydrangeas have blushed-up beautifully. #hydrangea #hosta #fatshederalizeivariegata #camellia #inmygarden #thewatchhouse #broadstairs #frontsteps #foliageplants #plantsforshade
Just a few coleus in the greenhouse! Among others we have Solenostemon ‘Habanero’, ‘Spiced Curry’, ‘Henna’, ‘Gay’s Delight’, ‘Flirtin’ Skirts’, ‘Combat’, ‘Wisley Tapestry’, ‘Pink Chaos’ and ‘Burgundy Wedding Train’. Quite soon they’ll be planted out in terracotta pots and used to line the path to the front door. #coleus #solenostemon #inmygarden #thewatchhouse #coleushenna #coleusgaysdelight #coleushabanero #coleuspinkchaos #inmygreenhouse #plantbabies #plantlust #plantcollector
Powder puff perfection. #sparmanniaafricanaflorepleno #inmygarden #thewatchhouse #tendershrubs #foliageplants #bigleaves #furryleaves #pompomflowers #unusualplants #architecturalplants
Last night I noticed that my Isoplexis sceptrum (giant Madeira foxglove) is producing not one but ten flower spikes this year. This tender, endangered shrub or small tree from Madeira has grown outside for ten years and has slowly increased in size. It’s not a common plant so I am especially proud of growing it. When the flowers open the plant will look like a very exotic candelabra. The flowers were originally pollinated by sunbirds (now extinct) and produce copious amounts of sweet nectar. The house sparrows do not let this go unnoticed! More updates over the coming weeks. Meanwhile I have planted a second Isoplexis sceptrum purchased recently from Treseders in Cornwall. The first came from Hardy Exotics. Both nurseries can be relied upon for good plants. #isoplexissceptrum #inmygarden #thewatchhouse #plantsofmadeira #flowersofmadeira #unusualplants #tenderplants #hardyexotics #foliageplant #floweringplant #giantfoxglove #digitalissceptrum #plantaholic #plantcollector #boldfoliage #architecturalplants
%d bloggers like this: