I can smell Cornwall before I can see it.

Driving across the ancient border between Devon and Cornwall at night it’s pitch black, but I know that if I wind the car window down the mingled scent of damp heather, moss, fern and lichen will be forced up my nostrils faster than I can say ‘Kernow a’gas dynergh‘: ‘Welcome to Cornwall‘, in Cornish.

I’m staying with my sister Kat and my niece Martha whilst I recover from a month of ill-health and general mayhem, and before I embark on my annual trip to India and China. They say a change is as good as a rest, which is just as well: a change it is, a rest it is not.

We visited the Eden Project today. Martha proudly announced that I would love it, oblivious of the fact that I’ve been having an affair with this amazing enterprise for 17 years, witnessing the transformation from clay pit to class act.

Eden never disappoints. Its long, winding paths were mercifully quiet today, bathed in soft autumn light and baking hot, which would have suited most of the plants more than it suited me.

The way Eden has settled into its landscape is breathtaking. It’s almost impossible to imagine how the site was twenty years ago – a bleached-out, slurry-filled hell-hole with a bleak future. Now Bodelva’s steep cliffs are thick with native greenery and the pit is filled with an encyclopedic collection of plants that have benefitted man in one way or another.

I was looking forward to seeing the National Collection of Kniphofia in flower, but it was all over bar a few chunky Kniphofia rooperi. Thank goodness for generous clumps of Hesperantha coccinea which splattered the grassy banks with red. 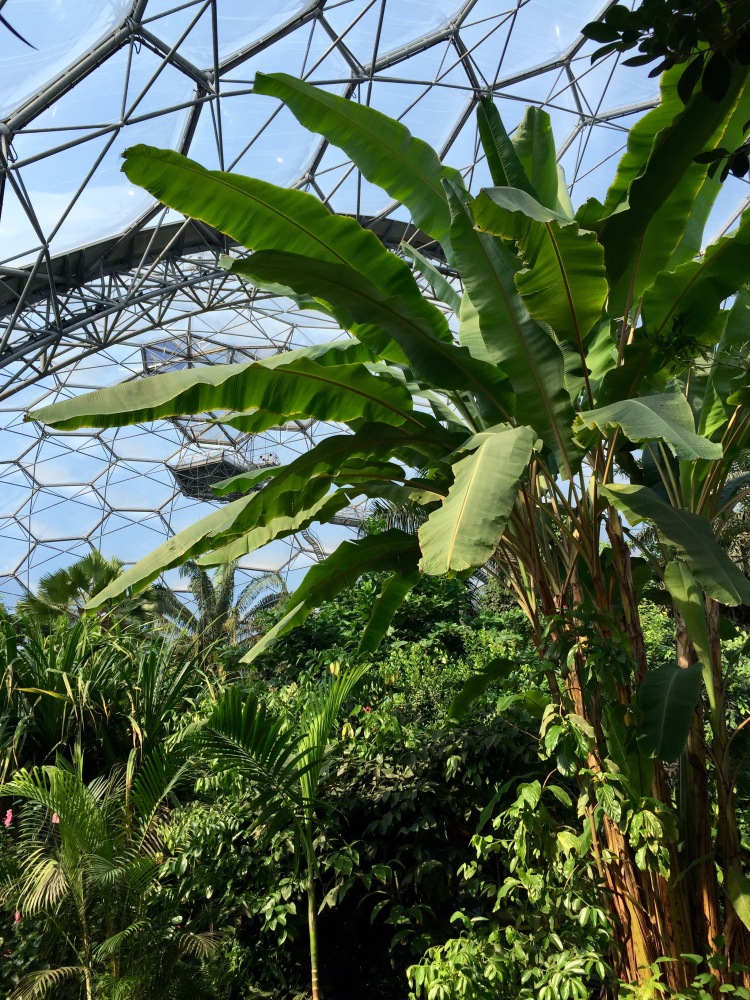 The humid tropical biome was a joy to behold as always, jam-packed with jaw-droppingly beautiful plants, including the blue ginger, Dichorisandra thryrisflora, which is not actually a ginger at all, but who cares.

I tried to make a video of the cascade that runs through the vegetation. This went well until Martha decided she wanted my attention and starting yanking at my camera bag.

I’m frankly hopeless in hot, humid, conditions –  I melt faster than a tub of Kelly’s clotted cream ice cream – so I’m always relieved to escape to the Mediterranean biome. I could move in here at the drop of a hat to write joyfully among the vines and olive trees that have established themselves so impressively. Here there are colonies of Geranium maderense and Sparmannia africana so handsome they make me weep. Impressive collections of chilli, tomato and aubergine kept Martha amused for at least ten minutes.

With a three-and-a-half-year-old in tow a visit to Eden is never going to be relaxing, but this experience does throw the project’s broad appeal into perspective. Young and old, first-timers and old-timers, thrill-seekers and land-lubbers alike, everyone was in awe and enjoying a great day out. This is not an easy feat for an attraction in the 21st Century and testament to Eden’s energy and our eternal fascination with the natural world. TFG.

Blue skies are back and holidays are coming. Full steam ahead with preparation for opening this weekend. Full detail in my bio if you’d like to come along!
Extraordinary ‘Akita’.
A few more days and the plants will have engulfed the entire Gin & Tonic Garden. Time to get the machete out!
Proving that Mother Nature loves a highlighter pen as much as the rest of us, Dahlia ‘Ken’s Rarity’ serves up the perfect form and colours that would melt your pencil case.
The sun’s back, and everything’s growing like crazy.
Of all the dahlia classes, the waterlily-flowered dahlias are probably our favourites for cutting. They typically have long stems and a certain peony-like softness to their flowers. This is ‘Hollyhill Serenity’ with exquisite peach soufflé blooms. We adore it and can’t wait to have enough for the vase.
Loading Comments...
%d bloggers like this: