As a rule, I don’t sit down, unless it’s to eat a meal or to work. When I make myself a cup of tea I tend to perch for the first sip and then get on with the next job that needs doing. When I read a book, it’s usually for 15 minutes before falling asleep. And when I’m watching TV, I’m probably ironing at the same time. The only thing that slows me down and encourages me to park my derrière is the first drink of the evening, which is always a gin and tonic.

I have become, by occupation and by habit, something of a gin aficionado: I was a fan even before gin was fashionable, but now I’m a fanatic. These days there are hundreds, if not thousands, of gins to try in the UK alone. Slowly and surely, I am working my way through the lot. There are gins with samphire from Cornwall, distillations of rhubarb and tea from Yorkshire, gins with frankincense from Highgate and navy gins so strong they could almost put you in a coma. So what’s this got to do with gardening? Not a lot, but whatever the ingredients of a G&T, one needs somewhere peaceful and attractive to sit and imbibe it. That’s what I am attempting to create at The Watch House. 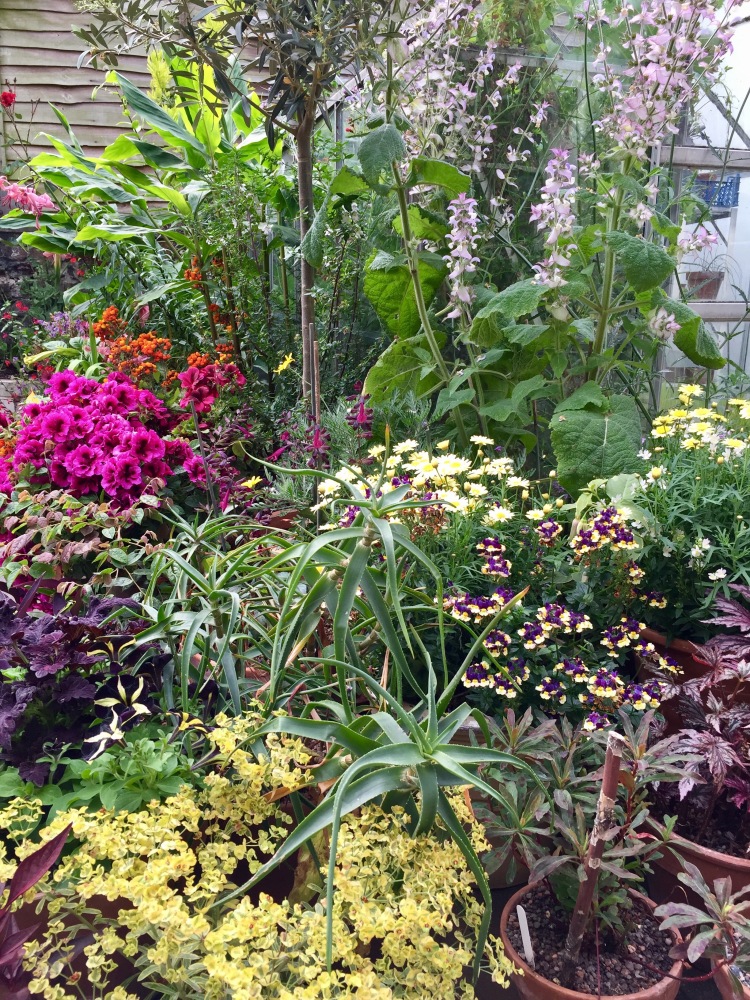 The cottage into which I have extended has a small courtyard measuring 20ft x 20ft. It has a southwesterly aspect, which is a novelty given the garden I have toiled in for eleven years faces east. The new space means that I can now enjoy sun beyond 4pm, when it departs from one garden and lingers on in the other. On a sunny day at the height of summer I might be able to catch the sun’s rays from 4am to 7pm, when the sun drops below the roofline of the terraced houses on the garden’s western boundary.

There is a lot of work to do before this garden gets to a point where I am happy with it. There is a grand design, but no grand plan for how to fund it. The previous owner of the cottage was a keen gardener before age weakened his limbs and mind, but he was a very poor DIYer. Consequently, just about every job that was ever done was either bodged or done on the cheap, often both. All the hard landscaping, which is rather a grand way of describing an assemblage of concrete slabs and bricks, needs ripping out and starting again. After 12 months of building work this is not job I care to tackle straight away.

So, in the short-term, I have resorted to pots and climbers to disguise ugly brick work and poorly laid paving slabs. The external wall of the garden room was such a horrendously scarred patchwork that I had that rendered and painted off-white – not Magnolia, but Farrow and Ball’s timeless ‘White Tie’. I had not considered the extent to which this pale finish would reflect light back into the garden and greenhouse, but the effect is quite dazzling.

Ultimately I want all the planting to be in shades of sage green, primrose yellow and dusky lavender, but I have a lot of plants I purchased before I made that decision and they will need to be re-homed before this pastel vision can be realised. There are magenta pelargoniums, molten-orange calceolarias, pink camellias and red salvias, none of which fit with the look I am hoping to achieve. The gin and tonic garden will be as different from the other garden as possible – less structural, brighter and more attractive to bees and butterflies. I am already staggered by the quantity of pollinators and the speed with which they have exploited my newly planted flowers. Provided they don’t fly lazily into my glass, I am very happy to share quiet time with busy bees. Seagulls are less welcome winged visitors who like to drink straight from my watering can. Perhaps I should fill it with navy-strength gin and see how fast they come back?

The greenhouse, which is an ugly and inappropriate feature in such a tiny space will remain, owing to its usefulness. Try as I may to clear it, the greenhouse seems to fill up again. I’ve planted chillies and cucamelons, and taken more aeonium cuttings than I know what to do with. The pathway which leads from the street to the garden is a challenge as it’s narrow and bordered by the slimmest of beds, varying in width between six and ten inches. Plants that spread, froth or flop just block the way or makes one’s trousers wet in inclement weather, so I have restricted the planting to clematis, which can be trained flat against the fence, and old-fashioned geraniums and pinks, which are compact and low-growing. The bonus is that I can also pick the flowers and propagate new plants very easily. 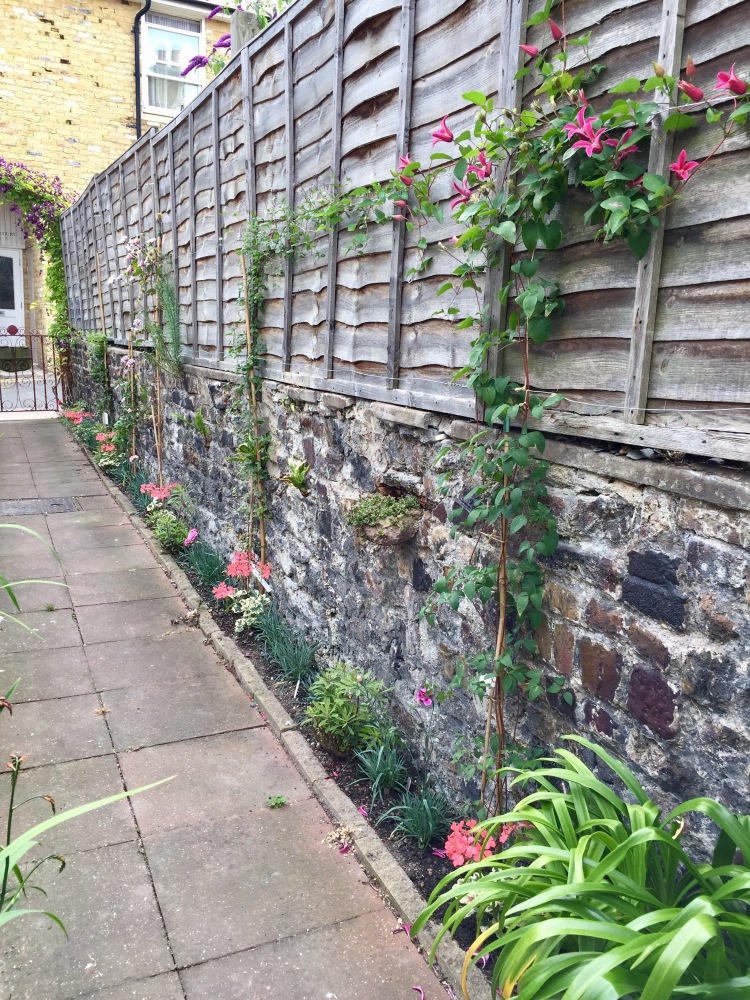 Finally, I had to make space for herbs. They’ve mostly disappeared from the east facing garden as it’s become shadier, although mint and parsley still like it there. A new patch, in sun for the whole afternoon, is perfect for bronze-leaved fennel (Foeniculum vulgare ‘Purpureum’), African basil (Ocimum ‘African Blue’) and Origanum ‘Hot and Spicy’. All are excellent to eat and magnetic to bees and butterflies when they flower. 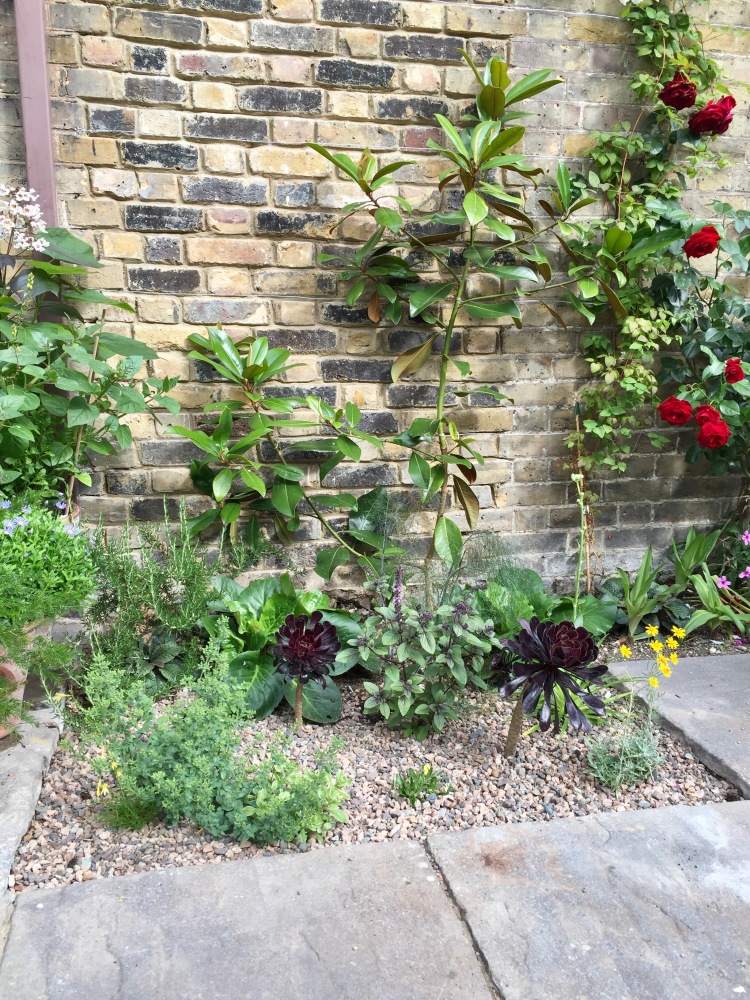 Planting all of this up over the last six weeks has left little time for leisure. I have promised myself that the next couple of weekends will be more relaxed affairs. I’ve a freezer full of ice, a bowl of ripe lemons, enough tonic to fill a bath and friends coming to stay. Bring on the gin and let the good times roll! 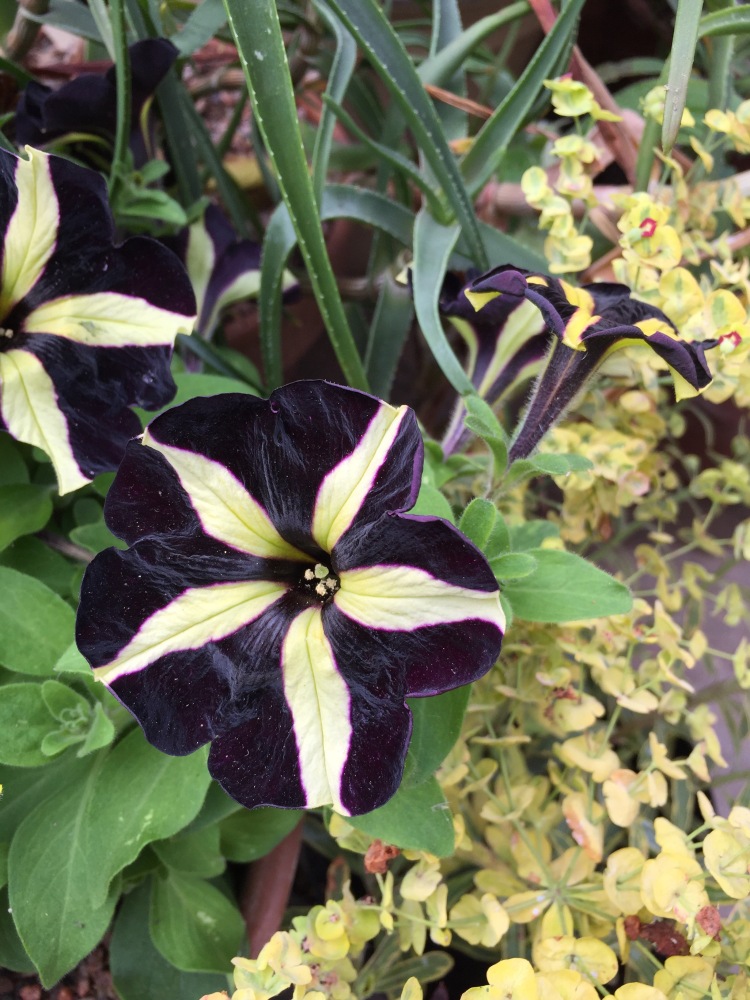 48 thoughts on “Tales from the Gin & Tonic Garden”

Another day, another whopper! This one is ‘Bilbao’. New to us last year and has come back bigger and stronger. The petals are a clear, lemon yellow with paler tips. Judging by the number of buds on our plant we’ll be cutting the blooms from now until November.
Blue skies are back and holidays are coming. Full steam ahead with preparation for opening this weekend. Full detail in my bio if you’d like to come along!
Extraordinary ‘Akita’.
A few more days and the plants will have engulfed the entire Gin & Tonic Garden. Time to get the machete out!
Proving that Mother Nature loves a highlighter pen as much as the rest of us, Dahlia ‘Ken’s Rarity’ serves up the perfect form and colours that would melt your pencil case.
The sun’s back, and everything’s growing like crazy.
Loading Comments...
%d bloggers like this: