The last time I wrote about Cobaea scandens was at Christmas and I make no apology for featuring it again so soon. Barring a few chilly days in February and March, this vigorous climber has not stopped flowering since the New Year. Having scrambled 15ft into the trees on our eastern boundary during year one, it is now cascading enthusiastically down, clutching at my hair with its finely-hooked tendrils. I am thankful I don’t wear a toupee.

That slightly alarming behaviour aside, Cobaea scandens, otherwise known as the cup and saucer vine, is a climber I’d heartily recommend. It is usually considered an annual, except in very mild areas (including our seaside garden) and under cool glass. Cobaea scandens is easy to grow from seed, planted on its side individually in pots of free-draining compost and given some initial warmth. The emerging seedlings will be a foot high before you know it, but should be protected until the danger of frost has passed. I tend to sow late, in mid March or early April, finding that the plants quickly catch up with those sown earlier. 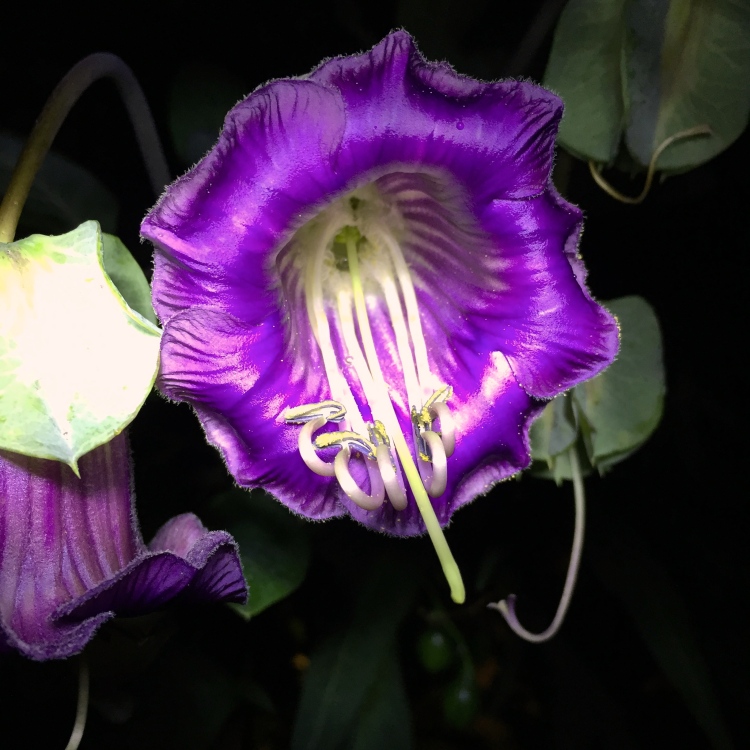 Once established Cobaea scandens goes off like a rocket, burgundy-tinted stems and leaves hauling themselves up rapidly using highly effective tendrils. Charles Darwin was so impressed by cobaea’s scrambling ability that he studied it for his book ‘The Movements and Habits of Climbing Plants’ in 1875.

You may have guessed already that cobaea is not a great companion for more delicate climbers – it’s far too vigorous for that – but it will very quickly and effectively cover a wall, building or pergola. My first experience of growing Cobaea scandens was as a teenager when, not appreciating its exceptional vigour, I planted a seedling to grow up each support of my parent’s wooden pergola. By the end of the season the canopy of foliage, dripping with flowers and egg-shaped fruits, threatened to bring the entire structure down. It took us a whole weekend to remove the mass of vegetation when frost eventually stalled the cobaea’s rapid progress.

Cobaea’s vigour should not put you off as it’s easy enough to chop bits off when they wander out of bounds. Flowers tend to appear in late summer, through autumn and until the first frosts. They open a greenish-white colour, rapidly blushing mauve before turning royal purple. A ruff of prettily veined bracts is the ‘saucer’ to the flower’s splendid ‘cup’. I have photographed them for this post in their latter stages and at night when, in their native Mexico, they would be pollinated by bats. We don’t have any bats at The Watch House, but I have seen bat-sized moths foraging among the long, protruding stamens. The flower on the right has not finished being pollinated and is facing outwards, beckoning visitors, whilst the one on the left has done its work and has turned down, stamens frizzled, soon to fall on my garden table where I like to study their extraordinary beauty. An all-white cultivar, Cobaea scandens ‘Alba’ is also available. It doesn’t lend quite as much va-va-voom to an exotic garden, but would be perfect in a white colour scheme or planted predominantly among greens in a garden enjoyed in the evenings. The fruits of both species and cultivars are bright green, a little like a juvenile quince, but do turn yellowy-orange when ripe. They are not noted as being edible.

Given another mild winter I am hopeful my cobaea will survive until next year; if cut down by frost it’s planted in a spot dry and sheltered enough for the roots to produce new growth in late spring. Truly an exotic princess amongst climbers, Cobaea scandens is well worth finding a spot for – just don’t turn your back on it for too long!

Wishing you all a great week ahead. TFG. 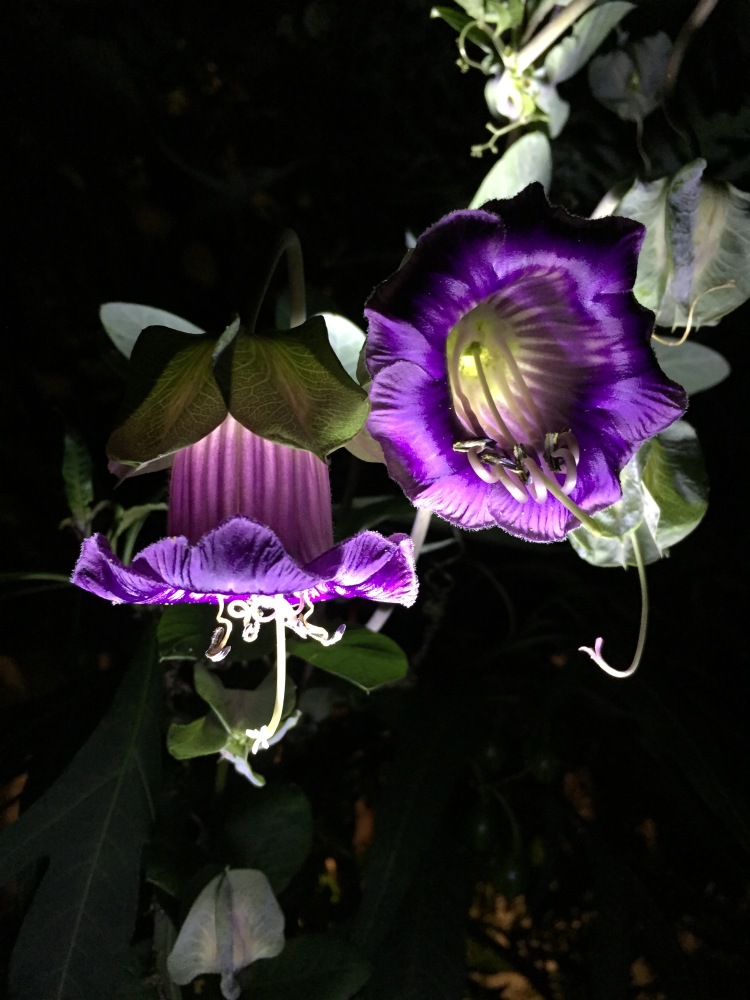