To have taken so long to feature Euphorbia mellifera in my regular Flower Candy spot is an unforgivable oversight. Perhaps it’s because the flowers produced by this statuesque Canary Islands shrub are curious rather than pretty. They emit an intense, heady, honeyed scent, which gives rise to the species name ‘mellifera‘, derived from the Latin word for honey, mellis.

Euphorbia mellifera is an adaptable, easy-going and attractive plant. I have grown it for at least 15 years in gardens in Cornwall, London and Broadstairs where in each location it has behaved differently. In Cornwall, planted in an exposed, sunny position my original, teenage plant remains waist high and perfectly domed, so neat it might have been pruned that way. The leaves are a pale, apple-green. In contrast, grown in a sheltered spot in London and bathed in sun for only a few hours each day, E. mellifera grows lush and tall, lending it an exotic air, which is how I enjoy it best. A 12″ high seedling planted three summers ago is already 8′ tall and counting (see below). The evergreen foliage is a luminous, waxy, pea-green, which alone is enough for me, but in spring appear the clusters of scented brick-red flowers that lend the plant its name. After a strong start, our garden in Broadstairs became too shady for this lovely spurge. After a ‘restorative’ prune to 6″ above the ground it never came back satisfactorily and I eventually grubbed it out, which took the best part of a day. Euphorbia mellifera makes a big plant and hates disturbance.

Alas E. mellifera is not a candidate for a pot unless, perhaps, an exceptionally large one. I have had many a seedling appear in a container but they have never prospered as they have grown on, probably because they enjoy a long root run through a well-drained soil. As with all euphorbias, this plant contains a milky-white irritant sap which oozes out of the stems when cut. This may lead to painful rashes on the skin and can be very harmful to one’s eyes. Gloves should be worn when pruning and pulling off old leaves, otherwise there should be no cause for alarm.

I’ve always been more than satisfied with E. mellifera, but this year I have planted the seed of a new introduction to gardens, Euphorbia x pasteurii. This new spurge was created by crossing E. mellifera with the incredibly rare E. stygiana which is now almost extinct in its natural habitat in the Azores, where only 50 mature plants remain. The cross has created a very fine plant with a more compact habit than E. mellifera and wider, deeper green leaves akin to a rhododendron. Flowers are produced from April to June, earlier after a mild winter, and are honey scented like both parents.

Seeds of all three species mentioned can be sown at any time of the year on a standard seed compost in a cool greenhouse. Germination may be sporadic so a little patience is required. Good things come to those who wait. Once your seedlings are big enough to fend for themselves plant them into their final position in the garden (most soils are acceptable), stand back and watch them grow into fine architectural specimens.

Seeds of E. mellifera, E. x pasteurii, E. stygiana and many other euphorbias are available from Plant World Seeds.

*AGM denotes the RHS Award of Garden Merit which is bestowed upon only the most garden-worthy plants. 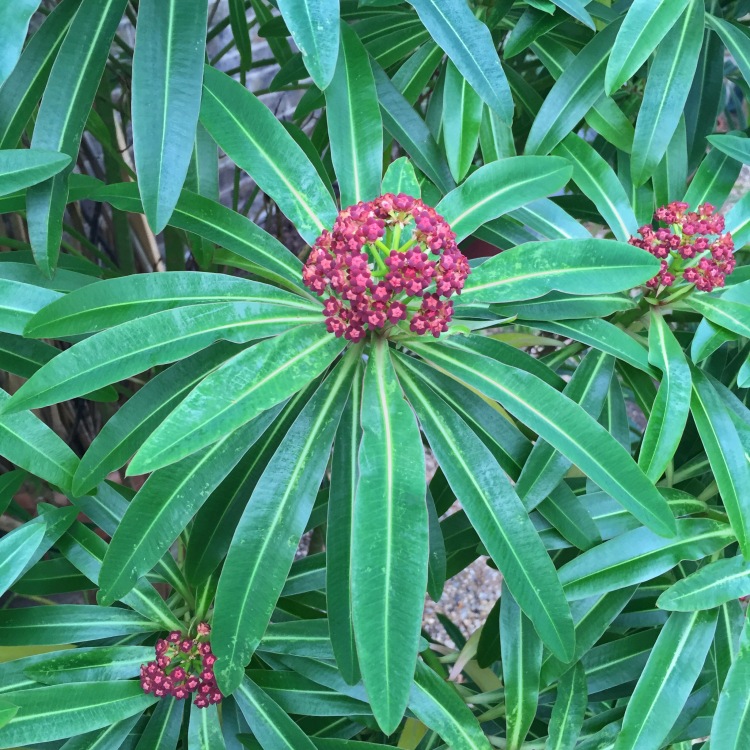