For the last couple of days I have been getting to grips with our two gardens. Like time and tide, nature waits for no man when spring arrives. We’ve not experienced a frost yet in either London or Broadstairs so many plants are racing ahead. Curiously, I still have hundreds of narcissi and tulips left to bloom. Their growth has slowed as the nights have cooled down, whilst hyacinths have raced ahead unimpeded. Regardless, the time for planning and procrastination is past. It’s time for action. 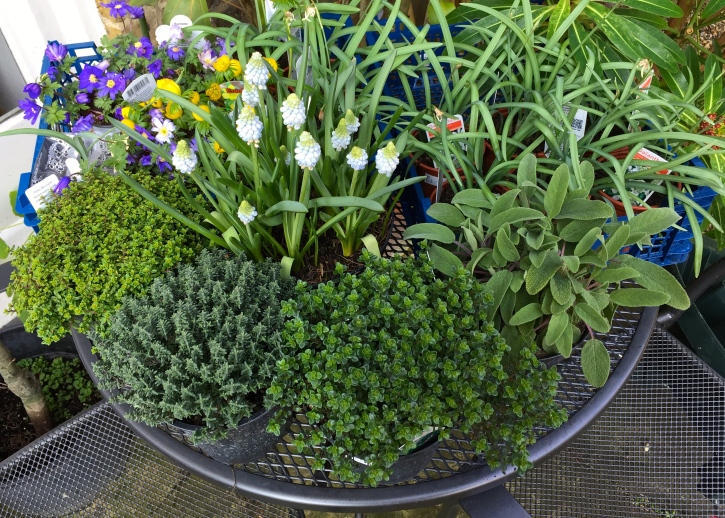 A table of treasures ready to be planted

On Thursday it was London’s turn. In comparison to our seaside garden our city garden is neglected, especially during winter when I don’t see it in daylight from one month to the next. Rather than gentle tweaking and adjustment each weekend, our London garden requires a major overhaul in spring and again in autumn. During the summer I try to get out there for at least 30 minutes every day to keep things ticking over. My first job was to plant three new espalier apple trees which have been heeled in since January. Planting them in the dark did not seem advisable, so Him Indoors and I snuck out the evening they arrived, digging one big, generous hole to keep them cosy until it was ‘time’. I took advice from David Patch at fruit specialist RV Roger in Pickering, explaining that we wanted tasty, cox-style eating apples over a long season. From a list of seven recommendations we chose three: ‘Epicure’ (early), ‘Ingrid Marie’ (mid-season) and ‘Tydeman’s Late Orange’ (funnily enough, late and, happily, from Kent). Whilst I’m not one of those ‘instant’ gardeners I do believe life is too short to wait years for a tree to produce fruit, so I splashed out on three-year old trained trees which should establish quickly. As I planted them I could see evidence of tiny new roots forming, so I was probably just in the nick of time. 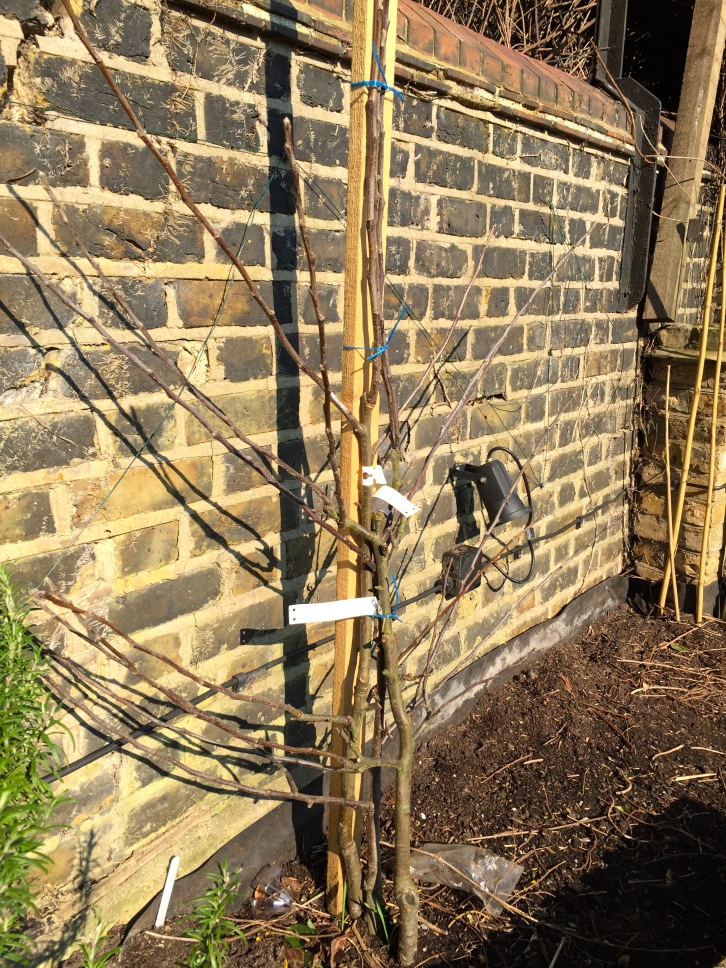 During the winter months Mr Fox has caused us endless problems, trampling plants, digging holes, howling eerily, burying food and generally using the garden as his playground. He could do with a bath and a splash of old spice to boot. I am hoping regular applications of Scoot may deter him, but he has no fear of humans whatsoever. This makes me suspect a neighbour is feeding him. Having had several rows of lettuce and other salad seedlings scratched up, I have sown my first batch of ‘Little Gem’ under an old propagator lid. French tarragon had spread everywhere, so I gently lifted the wandering roots and attempted to plant them in a neat line again. Herbs such as thyme and rosemary struggle in our shady garden so must be planted in the warmest, sunniest spot if they are to survive. I tend to replace all the plants in my thyme pot every spring, choosing a mixture of varieties with different foliage colours and flavours. 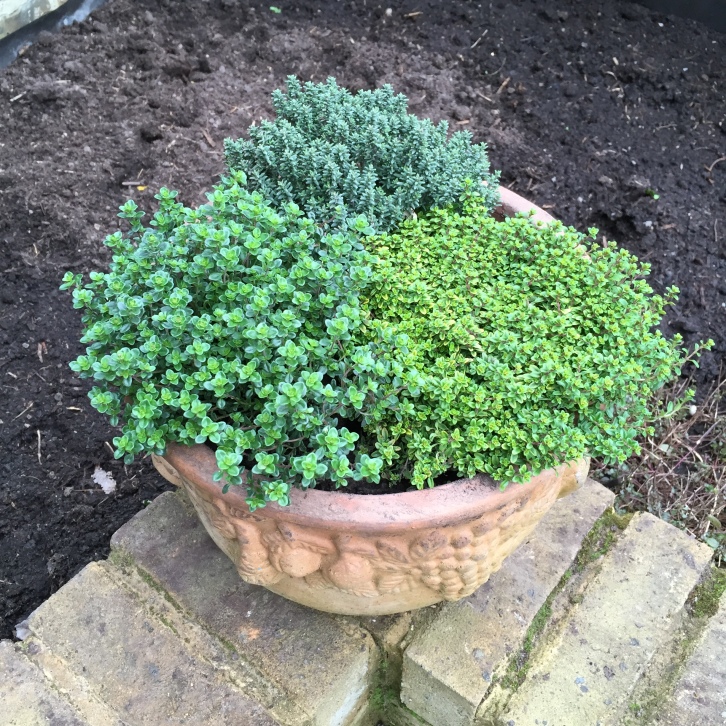 Every spring I despair of how few bulbs we have coming through in London. The soil is too cold and wet for most bulbs of Mediterranean origin, but narcissi, snowdrops and Anemone blanda demonstrate some staying power from one year to the next. Clumps of reduced to clear Galanthus nivalis snatched up greedily in the garden centre last spring have come back doubled in size and full of flower. Encouraged by this I planted yet more cut-priced snowdrops, this time Galanthus nivalis f. pleniflorus ‘Flore Pleno’ AGM (the long-winded but correct title for the common double snowdrop), along with some pots of Eranthis hyemalis (winter aconite) and blue Anemone blanda in a small rectangular border by the pond. The soil here is consistently damp but impossible to plant in late summer when it’s jam-packed with hostas and astilbes. A lovely hellebore with bright yellow nectaries purchased recently at Bosvigo hellebore day completed my work on that area. 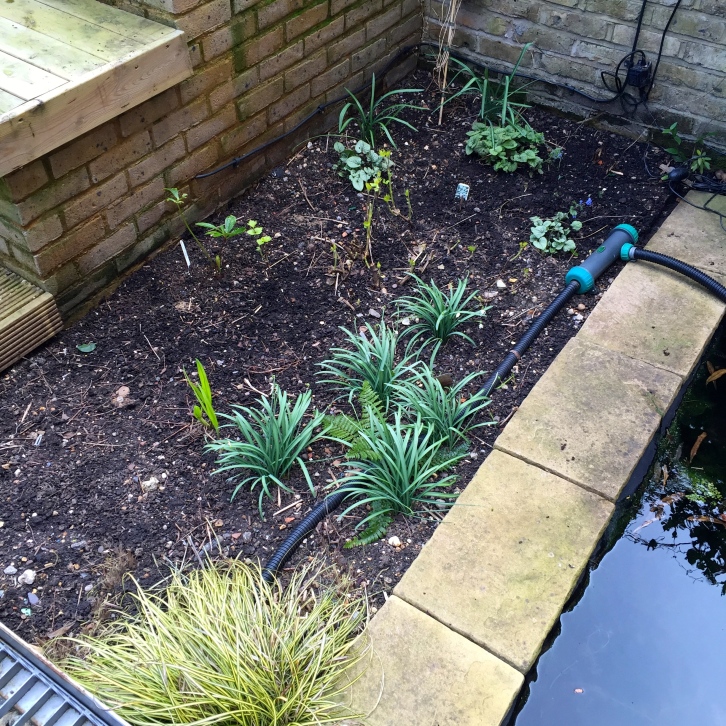 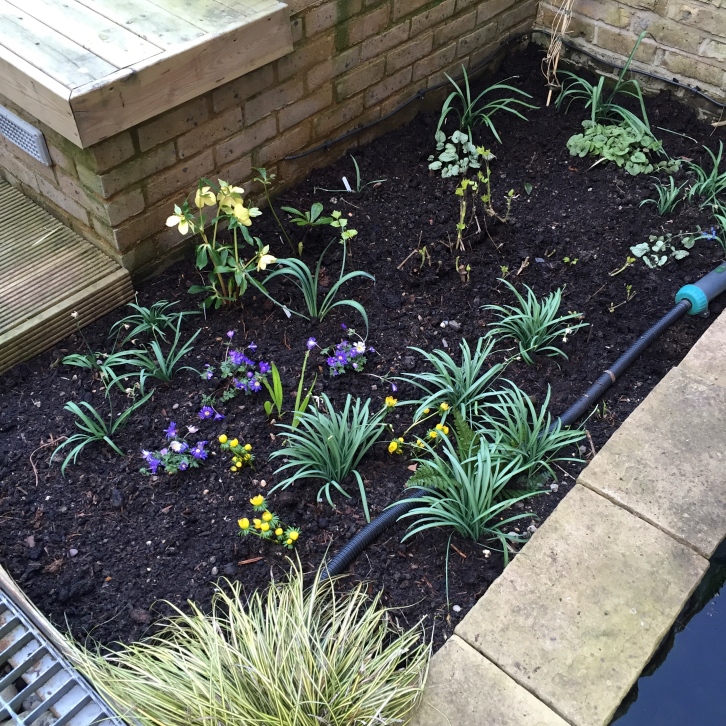 The soil in our London garden is appalling beyond belief, so every year I diligently top-dress with farmyard manure (which I was convinced would send Mr Fox into a frenzy, and has) and coarse grit to help open up the structure. I’d like to tell you this has made a difference, but if it has, I have not noticed it. I dream of one day picking up a handful of rich friable soil and letting it trickle through my fingers, rather than being repulsed by slimy clods of yellow clay clinging to my knuckles. Finally I ran out of time, energy and manure. The woodland garden would have to wait until Easter. It was time to go inside and make myself presentable before dashing to St Pancras to catch a train down to the coast.

To be continued ….. in Broadstairs. 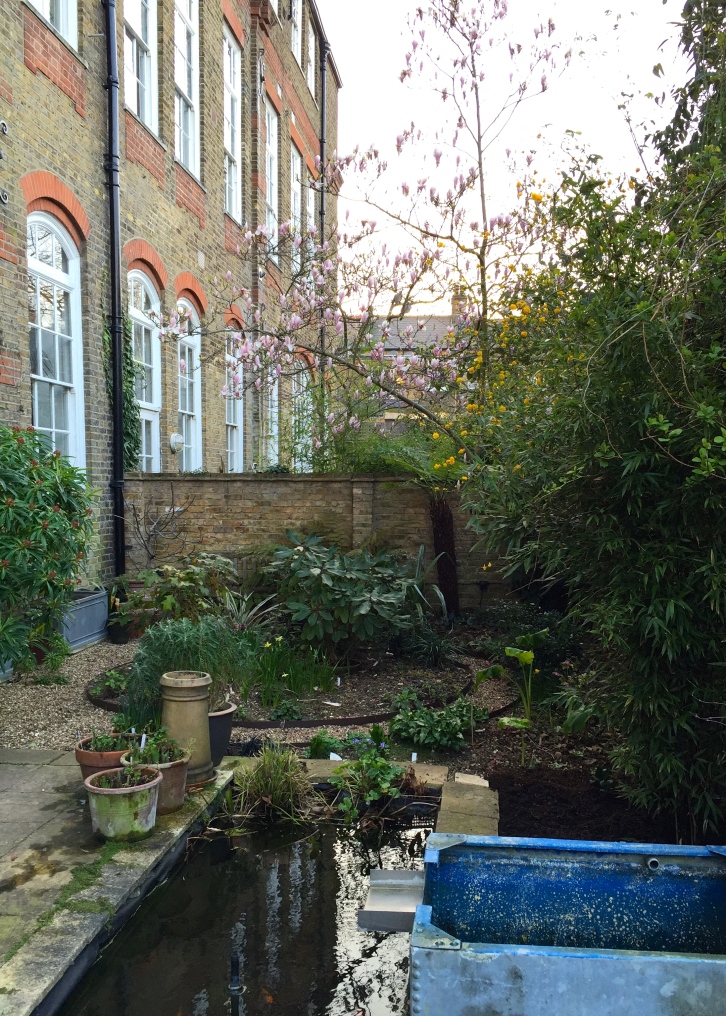 New bed created from a patch of coarse grass. Hard work but very satisfying. We’re considering making this the dahlia bed. They’ll enjoy the rich soil. #allotmentlove #saturdaymorningsatisfaction #allotment #digging #gardening #workingthesoil #growyourown #manyhandsmakelightwork
Echium envy. #echiumpininana #winterfoliage #gardening #plantsofthecanaries #growingstrong #tenderbiennial #plantlust
Harbour brights #harbour #fishing #whitstable #buoy, #eastkent #kentcoast #birthdaydayout
There’s a definite theme to my birthday gifts this year 🤔 #newallotment #newadventure #growyourown #vegetablegardening #kitchengarden #gardeningbooks #learnergardener #growfromseed #allotmentgardener
One week in, and I’m already learning to see the beauty in vegetables. This purple sprouting and kale was inherited from the previous allotmenteer. Purple Sprouting is one of my favourite vegetables and not that widely available, so it will be a treat when we cut it. As for the kale ..... a bit ‘meh’ but we won’t waste it. #purplesprouting #allotmentlove #brassicas #onmyallotment #growyourown #tastesbetter #kale #vegetables #gardening
Moonrise, Broadstairs. #onthebeach #englishchannel #moonrise #dogwalkwithadifference #moonshine #goldenpath #coldnightahead
%d bloggers like this: