As winter draws to a close, I can sum it up in one word: soggy. Dreams of bracing walks along the beach beneath clear, blue skies have been denied, replaced by nightmare navigations along muddy paths and through swampy fields.

I promise myself every year that I will visit more gardens during the winter (Anglesey Abbey is high on my list), but the dismal weather and a bevy of bugs has put paid to that idea for another nine months. Instead, I kicked off the season in fine style, with a trip to the West Country for Bosvigo Hellebore Day. I was greeted at Truro station by comfortingly Cornish mizzle, which accompanied me (as has an gluttonous appetite for Cornish pasties) for the entire 36 hours of my trip.

In Cornwall the spring is already well advanced: orderly rows of golden daffodils straddle the fields; brightly coloured camellias adorn garden boundaries like corsages on a greatcoat, and buxom magnolia buds stand proudly atop naked branches, waving their bawdy greetings to the advancing year. Yet the sky is still leaden and the ground is still sodden; not the best conditions for anything growing at ground level. So this year I will skip Wendy Perry’s superlative hellebores, which were as lovely as ever (if a little past their peak), and look upwards for inspiration instead. 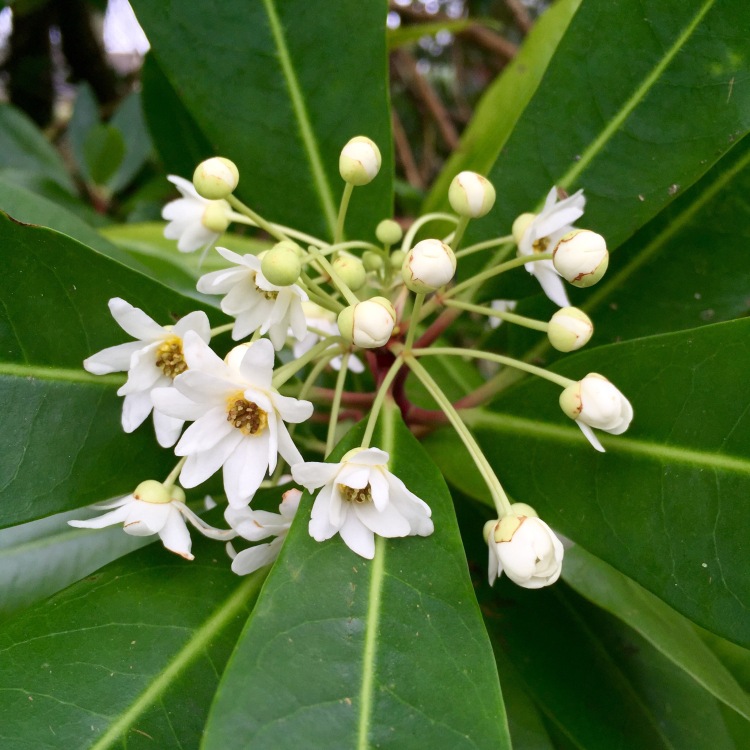 One of Bosvigo’s finest trees, and an evergreen one at that, is Drimys winteri (above), otherwise known as Winter’s bark. The name derives from one Captain John Winter, compatriot of Sir Francis Drake, who discovered that the Chillean tree’s bark was a useful source of vitamin C during a voyage around Cape Horn. Since its discovery in the 16th Century, Drimys winteri has been presented an Award of Garden Merit by the RHS and has found its way into the gardens of many discerning collectors. In the UK it makes a big, bushy tree with glossy, laurel-like leaves borne right down to the ground. Mature plants display smooth, mahogany-coloured trunks and branches. Jasmine-scented, white flowers, which usually appear in late spring, are the main event. They are presented in generous corymbs at the centre of each leaf rosette, rendering a large specimen in full bloom a sight to behold. It’s the one tree I hanker after for my garden, and one day I hope to have a plot big enough to offer Winter’s bark a home-from-home. 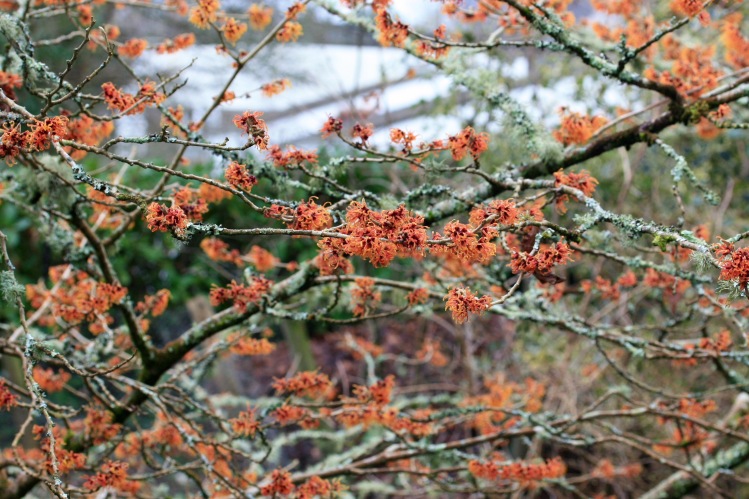 Bosvigo’s woodland garden is beautifully structured, with scented shrubs and small trees forming an elegant understorey beneath towering beeches. Most of the witch hazels (Hamamelis spp.), were long over, but one lingered on. I fancy it might have been a variety called ‘Orange Beauty’. Whatever the name, it was a splendid specimen with a low, spreading structure covered in fragrant, coral-orange flowers. Witch hazels are no good for me as they hate both waterlogged (London) and chalky (Broadstairs) soils, but I am happy to admire them in gardens where they are truly happy.

Tonight I am back on the Night Riviera Sleeper to the bright lights of London and, no doubt, more soggy weather. Regular readers will be glad to know that I have discovered a cure for my cough – Cornish pasties. I have been coughing less since I started eating them so, naturally, I will have to complete the full course of treatment, just to be on the safe side.

Wishing you all a good week ahead.

20 thoughts on “Bewitched, Bothered and Bewintered”

Iris ‘Sheila Ann Germaney’ making the world a better place - for me at least - this sunny Friday morning.
Brugmansia sanguinea is back outside after ten days sheltering in the workshop. Hasn’t stopped flowering since the day it arrived at The Watch House last summer and still producing new buds. What a trouper!
This weekend was our first full-on gardening weekend of the year: a day on the allotment, followed by a day in the garden. Not sure how we ever fitted socialising into our busy lives.
Here we go again! Work on the allotment has begun with weeding the beds and topping them up with old potting compost (this always results in a few interesting seedlings popping up!)
Anyone else desperate to get out in their garden this weekend?
Just a week ago the garden was covered in thick snow. Today it feels like spring might be just around the corner.
%d bloggers like this: