The moment I sit down to write my review of the year my mind goes completely blank. How do I sum up the year that was 2015? What happened of any note? Nothing there. A gardener’s optimistic outlook means I am always looking ahead, not back, which in this instance is unhelpful. Thank goodness I have The Frustrated Gardener to refer to – it’s become my surrogate memory. 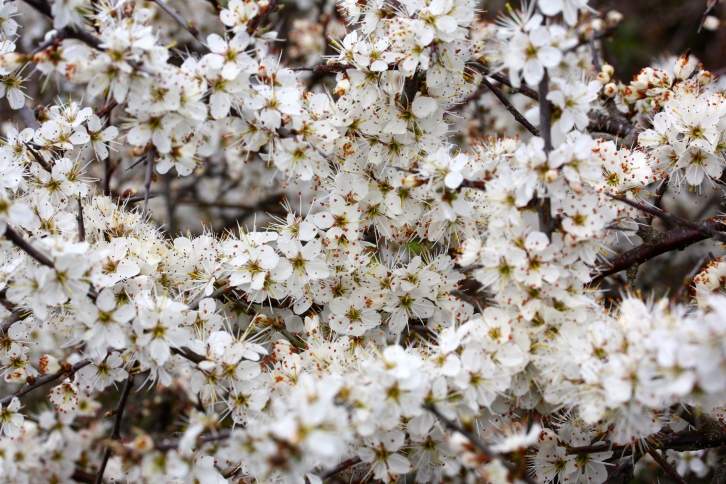 As I gather my thoughts I find 2015 is a hard year to sum up, happier than 2014 for sure, but not without its travails. 2015 delivered one or two surprises, not least the unplanned purchase of a neighbouring house, Polegate Cottage. This single event will doubtless define 2016 too, with the conversion into a single home planned to start in April. This sounds a long way off but will be upon us before we can say ‘over budget’. Once again a building project will dominate our lives and potentially disrupt gardening activities at The Watch House. All we can hope is that the pain is over quickly, but with builders one can never be sure! The end result will be a sizeable property, achieved without the cost and heartache of moving house, with additional garden space, a library, two extra bedrooms and a bathroom. A garden room or conservatory will follow when finances allow.

Part time water nymph, whirling dervish and carol singer Martha Moo (above) brought our family much joy this year. She’s retained her love of the great outdoors, especially the seaside, and her precious cat and dog, Sylvie and Boycie. Her doting uncles are, naturally, her favourites. She hasn’t begun formal horticultural training yet, but will hopefully continue to develop an affinity for flora and fauna. In less than a week she will be two. How time flies.

Meanwhile readership of The Frustrated Gardener has more than doubled this year, with invitations to write reviews and articles rapidly exceeding my capacity to oblige. I offer special thanks to Judy Von Feldt at New England Garden and Thread, Gill Heavens at Off the Edge Gardening and Anne Guy at Away from the Drawing Board for their regular feedback and encouragement, even when I’ve sometimes struggled to reciprocate, and of course to everyone who takes the time and trouble to like and comment on posts. 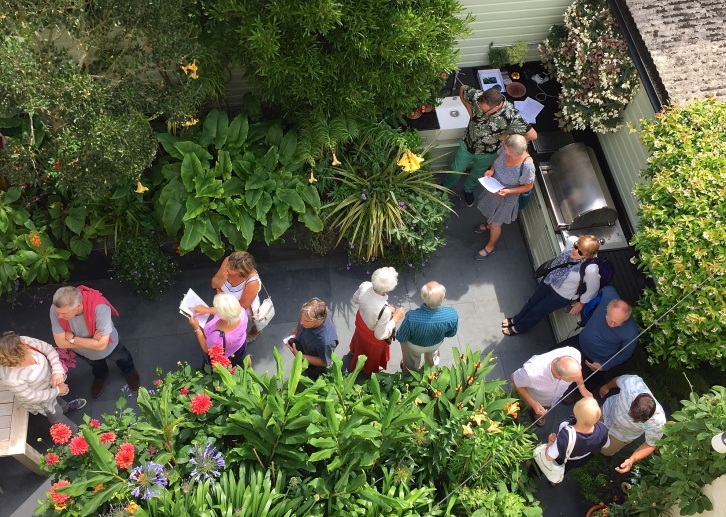 20 visitors and our garden is already at capacity!

So what of our gardens? In August The Watch House opened for the National Gardens Scheme for the second year. Visitor numbers almost matched our first year, which we were thrilled about having considered 2014 a tough act to follow. Over two gloriously hot days we raised nearly £800 thanks to the delicious teas prepared and served by Dan, Beth, James, Scarlett, Rachel and Alex. I know many visitors follow The Frustrated Gardener so I’d like to extend a big thank you to each of you for supporting the NGS charities and for your lovely comments. We hope to see you again next year. In 2016 the garden will open slightly later in August (just in case the building work over-runs) on the 20th and 21st. More details can be found on the NGS website.

Looking out of the window as Storm Frank ravages our coastal garden tonight it is hard to recall how it looked in late summer. It was a great year for all of my favourite plants: gingers, dahlias, agapanthus, salvias and begonias. I won the battle, if not the war, with vine weevils, but capsid bugs got the better of me and disfigured many of my fuchsias before an attack of fuchsia gall mite moved in to finish the job. 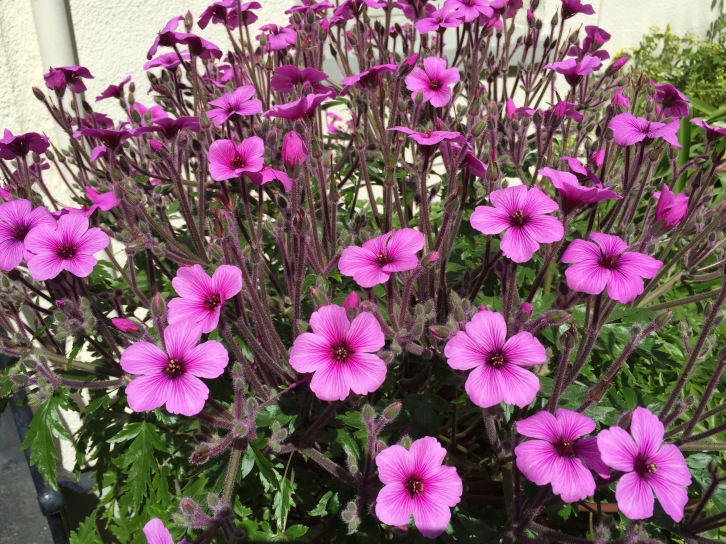 At the moment I have a splendid batch of Geranium maderense (above), both white and pink varieties, canopies 6ft across, primed to flower in April and May. It will depend very much on how cold it gets in the coming months whether these will achieve their eye-popping potential. Either way I’ll be left with a lot of gaps that need filling in early summer which means only one thing – an excuse to acquire more plants.

The garden at Polegate Cottage is testament to what can be achieved in a very short space of time. We took on the house and garden in early June and quickly planted up pots with a selection of annual and tender perennial plants, many with colourful foliage. I created a corner for plants with purple, plum and silver leaves and another for red, hot pink and orange flowers. A post on the merits of foliage in the garden ‘In Praise of Foliage’ was one of my most read posts this year.

A tapestry of purples and minty greens at Polegate Cottage

The result of my efforts ‘next door’ was a riot of colour which lasted until mid November. With a small greenhouse, sheds and a little nursery area this garden will remain functional rather than beautiful until we have the time, energy and funds to landscape it properly. Until then I shall have fun experimenting and growing more plants from seed, bulbs and cuttings.

The garden at Polegate Cottage, scarcely recognisable from when we took possession in June

It was a quiet year in our London garden until a pack of foxes decide to wreak havoc among the ferns and French beans. Ridding ourselves of these pesky urban intruders will be a winter job – I need them out of my hair before I invest any more time in vegetables and bulbs which they currently dig up as fast as I can plant them. In summer we were rewarded with a spectacular display of Lilium ‘Scheherazade’ (below) which I planted believing they’d be pink and white and which turned out to be rather more fiery. In 2016 I plan to plant more evergreen foliage plants suited to our wet clay soil and a lot more spring bulbs, especially snowdrops.

2015 was our first full season with a vegetable garden

It was a vintage year for the Chelsea Flower Show. ‘Best In Show’ went to Dan Pearson’s exquisite Laurent Perrier Chatsworth Garden, a slice of Derbyshire transported to the heart of London. It was one of those gold medal winning gardens that will, like the Trailfinders’ Australian Garden in 2013, live long in the memory. Soon after the garden’s Chelsea victory came the exciting announcement that the RHS and Chatsworth will be teaming up to bring us a new annual flower show, starting in June 2017. Back at Chelsea, special favourites of mine were the Dark Matter Garden for the National Schools’ Observatory, which won Best Fresh Garden (below), and The World Vision Garden designed by John Warland (top of post). 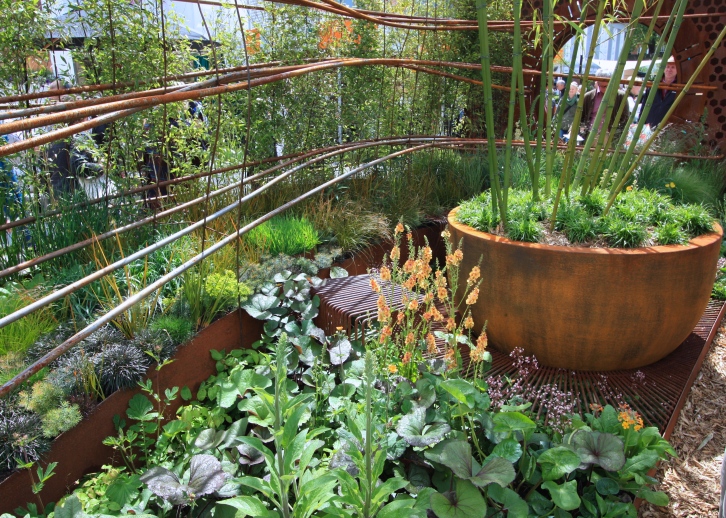 The Hampton Court Palace Flower Show sizzled, which made for a rather uncomfortable day out. Even Helen of Oz, more accustomed to temperatures in the upper 30s, found the going tough. Thank goodness then for the cool shade cast by the lime trees within Laurent Perrier’s enclosure. Naturally the only of course of action in such extreme conditions was to drink champagne and eat lobster. In my opinion the large show gardens were not up to last year’s standard with the exception of Nilufer Danis’ ‘Garden of Paradise’ designed for The Turkish Ministry of Culture & Tourism, winning the award for Best World Garden. 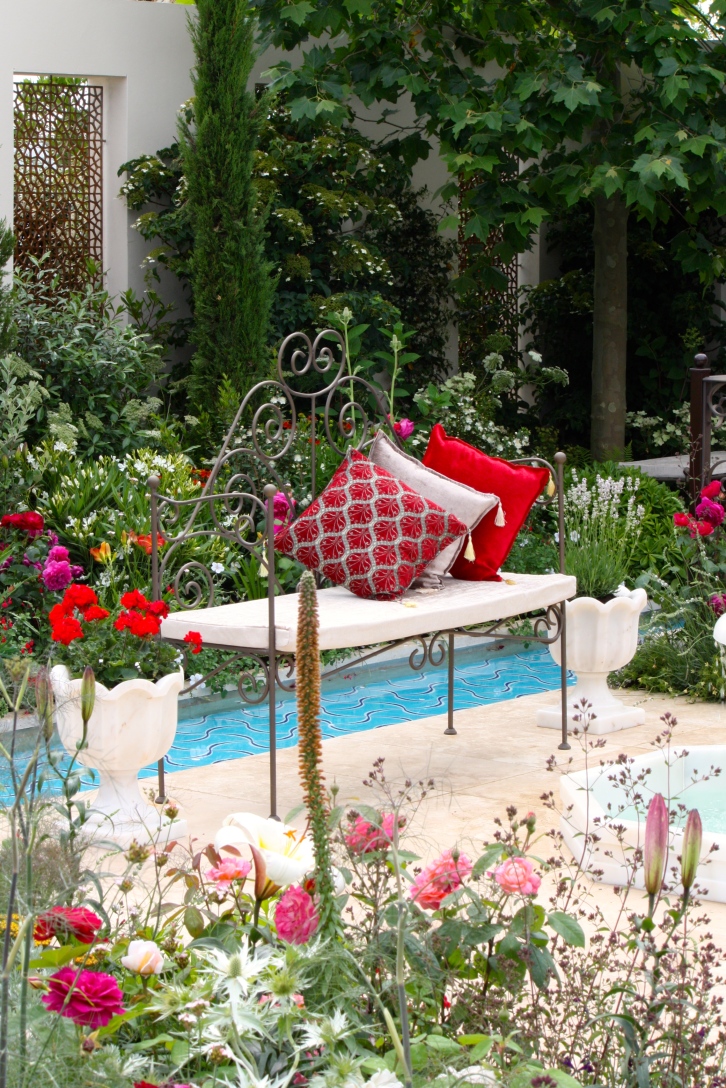 In September we enjoyed a week’s holiday in Sicily. The Orto Botanico di Palermo, in all its faded glory, didn’t disappoint, nor did the quirky gardens of the Villa Comunale in Taormina, originally laid out by eccentric Englishwoman Lady Florence Trevelyan. It was here that I photographed these beautiful belladonna lillies (Amaryllis belladonna) one sunkissed Mediterranean morning.

The summer in Thanet wasn’t without a hint of exotica. A specimen of Agave americana decided to flower, rocketing through the roof of the Italianate greenhouse which had sheltered it for over four decades. The unusual spectacle of a 30ft flower spike projecting from the Grade II listed building became a significant talking point locally and, in England, where there’s a spectacle there has to be tea and cake!

Looking up at the flower spike through the fine glass roof

Finding the right balance between looking after one’s own garden and visiting those of others is always tricky: this year the balance swung in favour of the former. However in May we enjoyed a lovely afternoon out with Gill Heavens at Marwood Hill Gardens, an occasion which deserved a post but which never quite made it. Here’s a view across the bog garden, crowded with colourful candelabra primulas, towards the elegantly domed folly. We hope to return in 2016, not least because the bevy of plants purchased at Marwood all performed exceedingly well when we got them home.

That same week Gill kindly organised a private view for us at Foamlea, a wonderful cliff-top garden at Mortehoe near Woolacombe. Here, on the North Devon coast, Beth Smith and her son Tim have created a very special garden, home to the National Collection of phlomis as well as countless other interesting plants. Anyone gardening in similar conditions would find a visit to Beth and Tim’s terraced garden invaluable. (Foamlea is open for the National Gardens Scheme by arrangement from May to September.)

Another year has gone by and I still haven’t undertaken the photography course I’ve kept promising myself. Until I do I am denying myself a new SLR camera, but increasingly use my iPhone for straightforward snaps. Meanwhile I have had fun collecting wild flowers in different locations and photographing them against different textures and tones of wood and stone.

Wild flowers of Kent, May 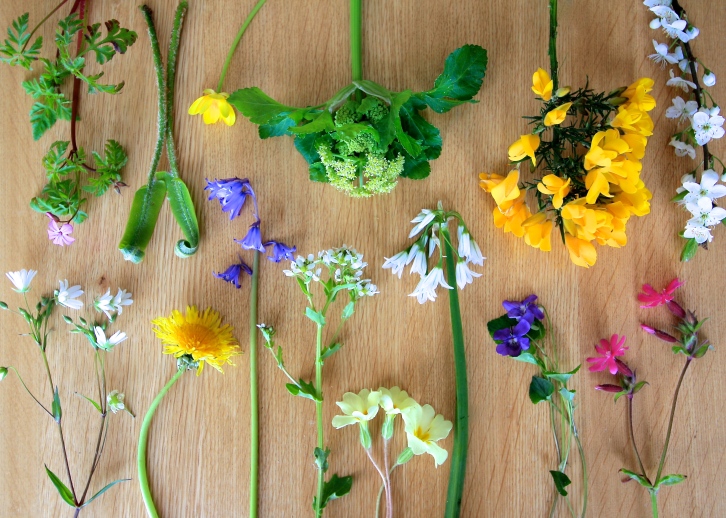 And so I arrive at the end of a record breakingly balmy 2015 just as I started it – taking photographs of snowdrops. Pictured below is a traditional Japanese ‘kokedama’, a hanging clump of native Galanthus nivalis enrobbed in damp moss. These were created for the delight and delectation of visitors to Chelsea Physic Garden’s special snowdrop days in February. These lovely events will be reprised in late January 2016, if indeed the snowdrops are not finished by then. Beneath the kokedama is a photograph of a clump of snowdrops taken in Highgate, London, this very Boxing Day. 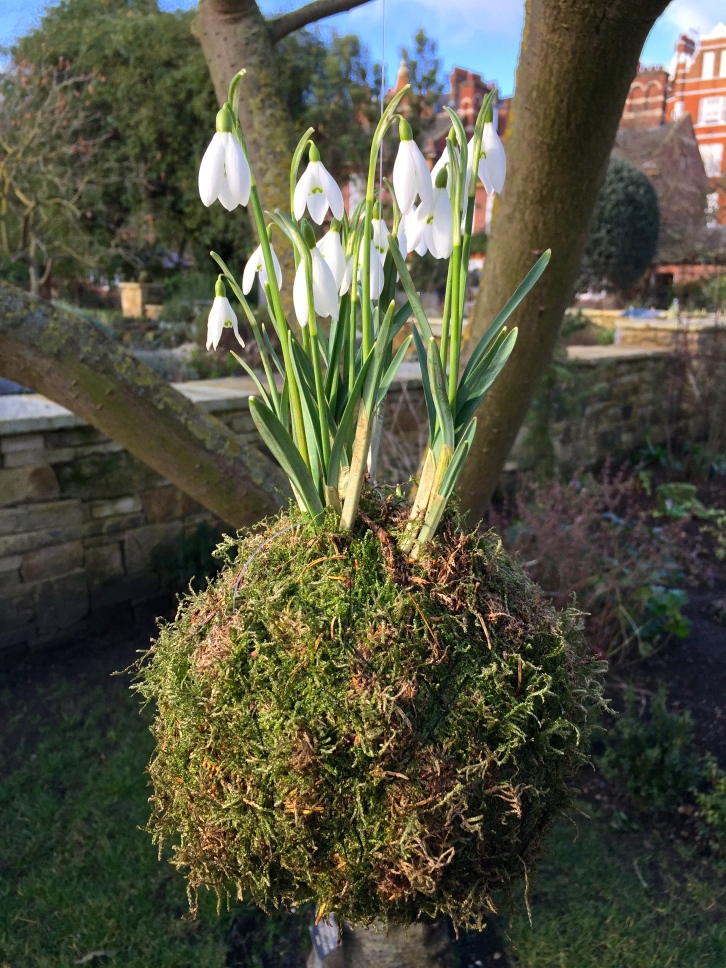 The first snowdrops of the winter started to bloom in December

However you are marking the end of 2015 and the arrival of 2016 I wish you much fun and merriment. I hope you’ve enjoyed my canter through The Frustrated Gardener’s best bits and that you’ll join me for a slightly slower ride on the rollercoaster that will be 2016.