I should have known better than to mention either of the words in the title of tonight’s post as, lo and behold, we were delivered a month’s rain on Friday and there’s been more of the same today. Both times the wet stuff was accompanied by gale-forced winds, first from the north (noisy, but not too troublesome) and then from the south (my worst nightmare). I was up at 2am, 4am and 6am on Saturday morning checking that nothing had been toppled by the monsoon. I then overslept and awoke to a garden strewn with leaves and looking rather tousled, but with no major damage done. Most plants appeared to have enjoyed the soaking, with the exception of the lilies which were hanging their pollen-smudged heads in shame. 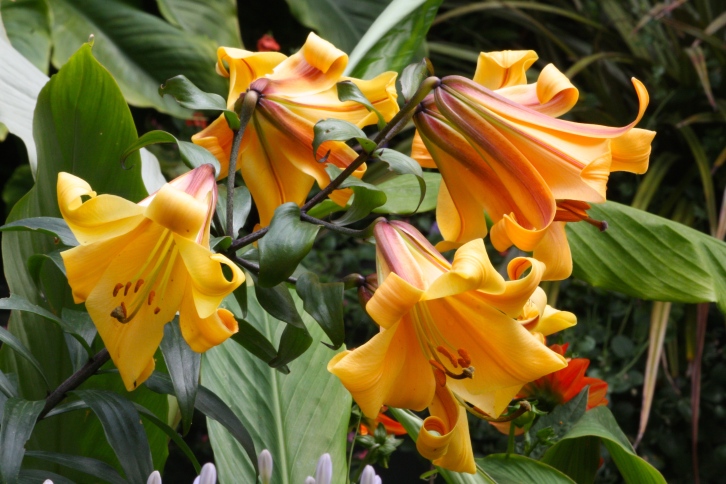 Cautleya, hedychium and roscoea don’t mind the rain and have so far avoided the attentions of snails. The foliage looks splendid for the lack of chomping, although I don’t take this for granted. Meanwhile vine weevils and caterpillars are doing a good job of wreaking pestilence, nibbling fuchsia leaves and disfiguring dahlia flowers nightly. The best form of control is a midnight patrol, complete with torch and paper in which to squash the ugly bugs. I have tried sprays and soil drenches, but nothing frees me from these two persistent pests like nocturnal hunting. 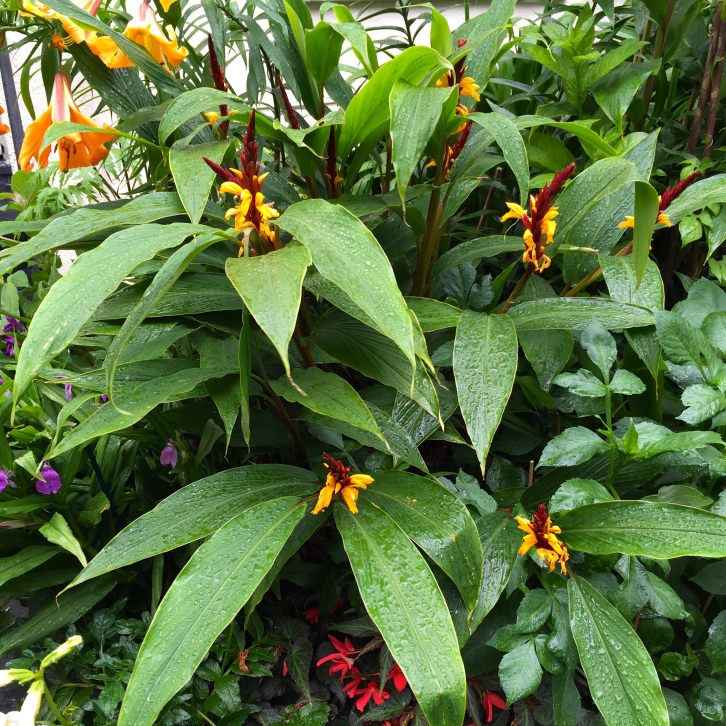 Cautleya spicata, one of the toughest tropicals I know

Driven inside by the rain I watched the garden get a good buffeting and wondered why I even bothered trying to sweep the terrace. I neatly organised all the NGS paraphernalia on the dining table in readiness for next weekend before returning to the fray to stake lilies, cannas and salvias. The weather was taking no prisoners and I ended the afternoon soaked through. With luck the weather will mellow though the week and reward us and our visitors with sunshine during our open weekend.

Did you manage to get anything done in the garden this weekend, or did you choose to snuggle up with a cup of tea and a good book instead? 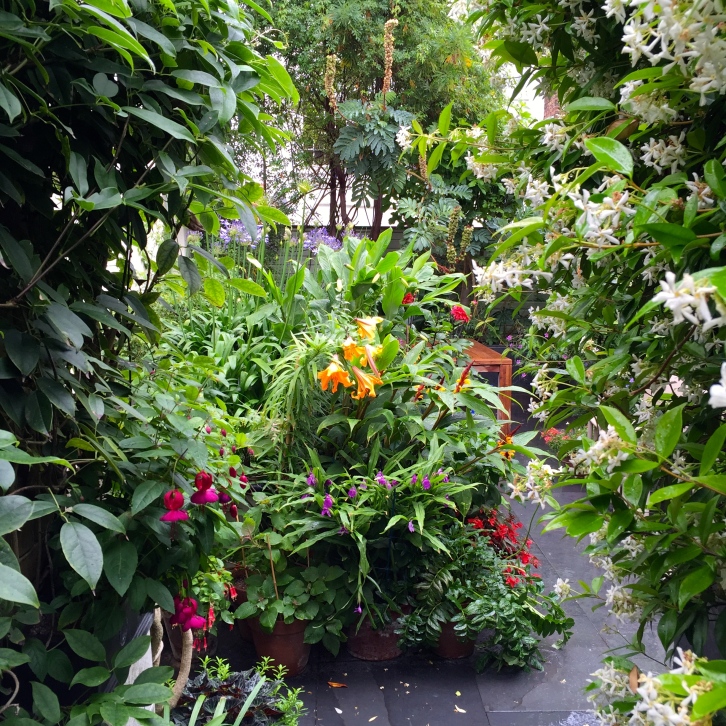 A view of The Watch House garden from the passageway

Spanish broom. #spartiumjunceum #beachhuts #weekendwalk #whitstabletoseasalter #spanishbroom #droughttolerantplants #scentedflowers
Summer starts here! Yesterday we spent the whole day moving the Jungle Garden around in readiness for summer. Lots of heave-ho, repotting, pruning and watering. Phase 1 is complete but plenty more to do. In the foreground Musa sikkimensis ‘Red Tiger’. #musasikkimensisredtiger #inmygarden #thewatchhouse #summerscoming #smallgarden #urbangarden #greenoasis #courtyardgarden #microclimate #ngsopengardens #kentngs #geraniummaderense #garden #gardener
There she is! Oh so beautiful: Impatiens tinctoria from the rainforests of Africa. Impatiens tinctoria comes from the higher elevations in central Africa, where the climate is relatively cool. It prefers temperatures between 10-27°C with cooler nights. It also appreciates dappled shade and high humidity making it exceptionally well suited to the back corner of the Jungle Garden. The orchid-like flowers carry a similar perfume to gardenias. All in all, sublime, and this is just the first of many flowers. #impatienstinctoria #inmygarden #thewatchhouse #impatiens #unusualflowers #jungleflowers #dyersbusylizzie #plantcollector #plantaholic #rareplants #plantswithattitude
Oh I do like to be beside the seaside 🎵 #ohidoliketobebesidetheseaside #inbroadstairs #sunseasand #vikingbay #thanetlife #kentlife #beachlife #malvaarborea #saturdaymorning
My, how you’ve grown! The plants on our front door step have really filled out over the last fortnight and the hydrangeas have blushed-up beautifully. #hydrangea #hosta #fatshederalizeivariegata #camellia #inmygarden #thewatchhouse #broadstairs #frontsteps #foliageplants #plantsforshade
Just a few coleus in the greenhouse! Among others we have Solenostemon ‘Habanero’, ‘Spiced Curry’, ‘Henna’, ‘Gay’s Delight’, ‘Flirtin’ Skirts’, ‘Combat’, ‘Wisley Tapestry’, ‘Pink Chaos’ and ‘Burgundy Wedding Train’. Quite soon they’ll be planted out in terracotta pots and used to line the path to the front door. #coleus #solenostemon #inmygarden #thewatchhouse #coleushenna #coleusgaysdelight #coleushabanero #coleuspinkchaos #inmygreenhouse #plantbabies #plantlust #plantcollector
%d bloggers like this: