It really has been the most remarkable April. So far not a single drop of rain has fallen on either of our gardens and, although night temperatures have hovered just above freezing, the days have been sunny and warm. The result has been an avalanche of flowers. The daffodils that sat and shivered through March are now almost over, with the hyacinths fading fast. I have grown H. ‘Woodstock’ (plummy purple) and H. ‘Gypsy Queen’ (pale apricot) this year: both have put on a great show. Hyacinths are awkward flowers to place in borders so I prefer to plant them in pots where their formal appearance is less incongrous and their scent closer to my nose. They will be unceremoniously discarded as soon as the last flowers fade and replaced with fresh bulbs in the autumn, ready for next spring. 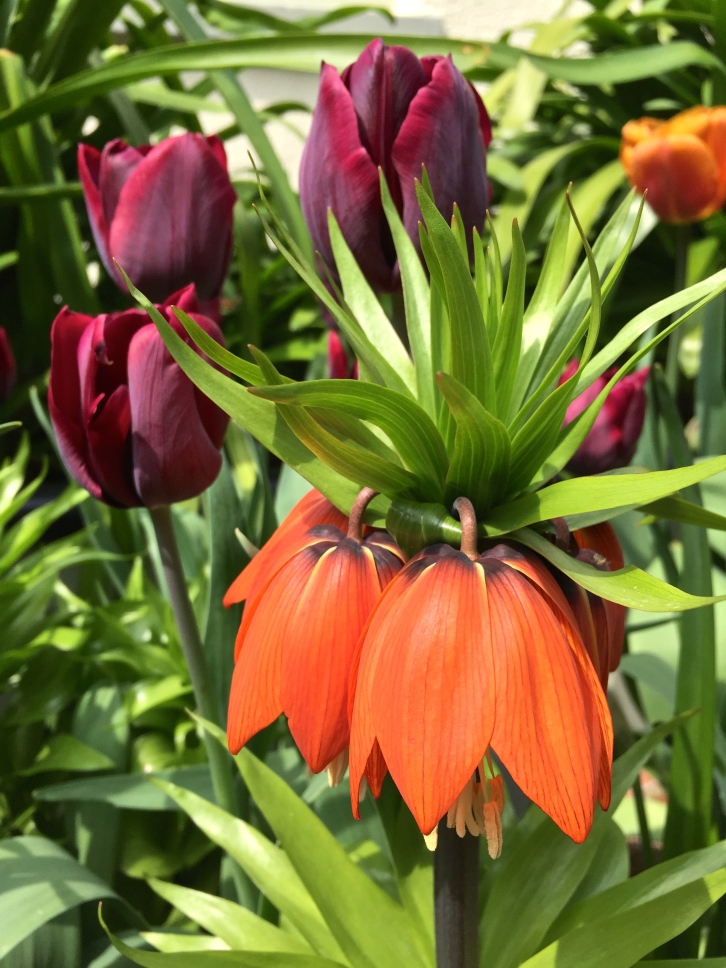 The spotlight is now firmly on the tulips. For the first time they were all purchased from Sarah Raven, who has a great talent when it comes to curating collections of flowers that coordinate brilliantly. I wanted to push the boat out so purchased no fewer than twelve varieties (more than 350 bulbs) in a colour spectrum from apricot, through clear orange to darkest aubergine. The inclusion of rose pink, in the form of Tulipa ‘Chatto’, was a mistake I will not repeat: the colour is not quite hot enough to compete with my ‘fire and brimstone’ theme. Thankfully when everything is grown in pots one can correct clashes very simply by moving the culprit elsewhere. With blooms like a voluptuous peony, T. ‘Chatto’ seems to combine much better with blues, whites, yellows and lighter pinks.

The first act of my great tulip extravaganza was opened by varieties that went over a fortnight ago. The show now well into the first half, a cast of T. ‘Bruine Wimpel’ (caramelised orange), T. ‘Brown Sugar’ (rosy tan), T. ‘Ronaldo’ (purple with a metallic sheen) and T. ‘Burgundy’ (more magenta than deep red) have got me jumping for joy. T. ‘Belle Epoque’, her flowers the colour of a bruise on a dusky maiden’s arm, are emerging from buds that look like uncooked sprouts – she’s a real Cinderella of a tulip. Soon she will be joined by her Prince Charming, Tulipa ‘Black Hero’, the tall, double-flowered cousin of ‘Queen of the Night’ (who will not make an appearance until the finale). The queen will eventually partner with ‘Rem’s Favourite’, another selection that I fear I may regret because of the white flashes on the petals. Time will tell.

Putting on a show

Tulips alone are not enough to pull off the theatrics so I have interspersed them with my all time favorite bulbs, Fritillaria imperialis. Even the strongly foxy scent, which has got me into trouble on a couple of occasions, is not enough to put me off these firebird flowers. This year I am growing F. ‘Sunset’ (pale orange) and F. ‘William Rex’ (burnt orange) to see how they compare. So far unscathed by evil lily beetles and sinister snails, the tall flower spikes leap like phoenixes from the flames.

In a sheltered corner, away from cold draughts, I am experimenting with a Chilean plant called Tropaeolum tricolor (three-coloured Indian cress). From little tubers emerged delicate, twining stems in late December. They were so fine I wondered how they would ever endure the cold. They survived and are now garlanded with flowers in a daring combination of red, indigo and fluorescent yellow. I have never grown anything quite like it, and am very glad I did. Once it’s flowered it will die down and will not appear again until next winter.

I love the volcanic energy of these firey colour combinations – they feel appropriate for a garden which is predominantly sub-tropical. The whole assembly proves to me two things: first that it is almost always worth trying something new, and second that if a job is worth doing it’s worth doing properly. Had I been timid or penny-pinching about the display I am convinced it would not have turned out so well. My only sadness is that I only have the weekends to enjoy the spectacle.

My Tulip Selection for 2015