Yesterday the hedgerows were heavy with may flower and vital with leaf as we drove from Broadstairs to Saltwood Castle for the 2014 NSPCC plant fair. Despite a chill in the air we threw the soft-top down and turned our faces to the sun for warmth. The venerable castle provided a romantic setting for this unmissable event, which happens annually on the May Day Bank Holiday. Hard working volunteers fired up barbecues, baked cakes and brewed tea to sustain hundreds of people that turned out to enjoy a perfect spring day and spot of horticultural therapy.

Last year we encountered carpets of daffodils and anemones leading to the castle’s formidable bailey. Thanks to milder weather, early spring flowers had been superseded by meadows of cow parsley (Anthriscus sylvestris), interspersed with comfrey (Symphytum officinale) and Rembrandt tulips. A more Pre-Raphaelite scene it would be hard to imagine; we were just missing a flame-haired lady floating in the moat.

Saltwood Castle has a long and turbulent history, but during quieter times The Queen Mother visited to plant a tulip tree (Liriodendron tulipifera) which now looks mature beyond its years. Sadly, as elsewhere in the country, the English bluebell population was heavily polluted by its Spanish cousin (Hyacinthoides hispanica, the Spanish bluebell) in shades of blue, white and pink.

Our native cowslips fought on, uncontaminated, relishing the well-drained conditions on top of low walls and surrounded by carpets of Cerastium (snow-in summer). 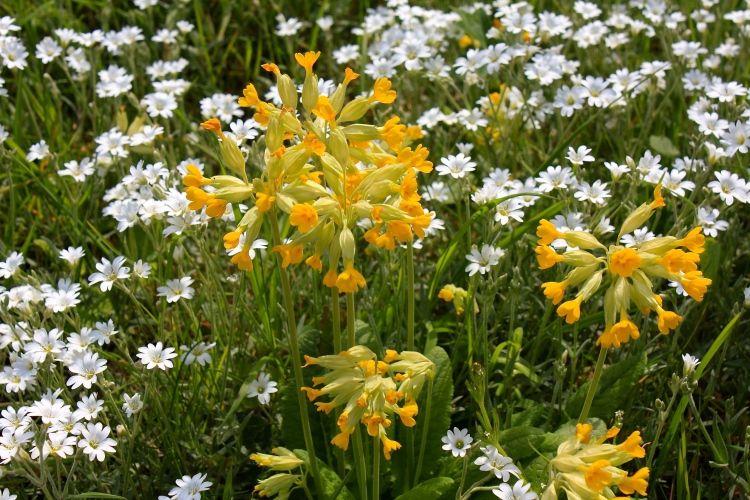 I encountered several plants for the first time, including Podophyllum ‘Kaleidoscope’ and Anemonella thalictroides ‘Oscar Schoaf’, grown by Amy Green and James Amery of Decoy Nursery at Pevensey, East Sussex. The pair, who tour a number of plant fairs around the South East, specialise in shade loving perennials suitable for woodland gardens. I succumbed to the sugary pink powder-puffs of the Anemonella, for which I will find a pot in a lightly shaded corner of our London garden. Although it appears delicate and precious, Amy finds it surprisingly tough and easy to grow.

Spurred on by my friend Beth’s success in cultivating auriculas at Trevoole, I was on the look out for a handful of plants to begin my own collection. I was recommended three cultivars, ‘Old Smokey’ (single, reddish brown with yellow centre), ‘Cinammon’ (lightly fragrant, double russet-orange) and ‘Shaun’ (perfumed, double golden-yellow). They’ll be transported back to London where I’ll need to find them a cool spot protected from the rain.

We enjoyed an impromptu picnic on the lawns, protected by the castle’s ancient walls. Roses were already in abundance, filling the air with scent, draping themselves carelessly over moss-covered urns and statues. There was a terrifying search for an illusive dragon with our friends’ young boys, and a not-so-fruitless hunt for Saltwood’s magnificent peacocks, which were lapping up the attention. We raced across the manicured lawns (I was beaten by a four-year-old), peered down murky wells and enjoyed watching the Castle Moat and Folkestone Bowmen teaching archery. 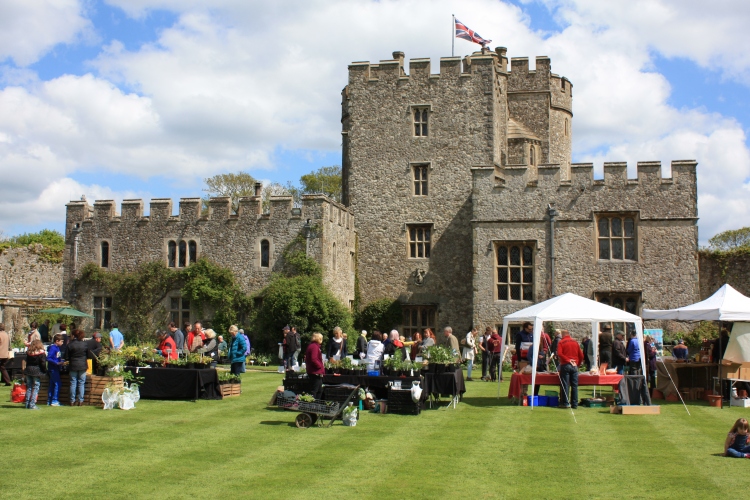 As well as a plant fair this was a super family day out and an opportunity to glimpse a very special part of England’s heritage. I will leave you with a collection of additional shots taken in Saltwood’s grounds, which would, of course, be incomplete without Him Indoors reclining on an attractive seat, resting his eyes.

11 thoughts on “Spring comes to Saltwood”

As each day goes by, more and more bulbs poke their heads through the gravel. Another month and we should have a display fit for Keukenhof.
You can keep all your fancy daffodils. I wouldn’t swap any of them for the ones that grow wild in churchyards, cottage gardens and orchards. The simpler the better as far as I am concerned.
Overlapping: the ink-splashed falls of Iris ‘Sheila Ann Germaney’.
Hello hyacinths.
Finally lifting my head and seeing new horizons.
Fruit trees planted just in the nick of time.
Loading Comments...
Comment
×
%d bloggers like this: