Very little trumps the romanticism of a well-made woodland garden. Lush, informal and unbridled it will capture the heart in its quest to mimic nature. Every spring, plants which might never find themselves partnered in the wild mingle effortlessly in dappled shade, enjoying a fleeting glimpse of the heavens. To my mind the creation of a woodland garden is a much greater test of a gardener’s skill than a formal parterre or herbaceous border. A lack of structure, other than the strong verticals of tree trunks, means a dextrous hand and good eye are required to achieve rhythm and texture within the tapestry of plants. Patience is also a virtue. Many woodlanders such as anemones, trilliums and arisaemas are slow to make impressive clumps; their growing season is, after all, incredible short. 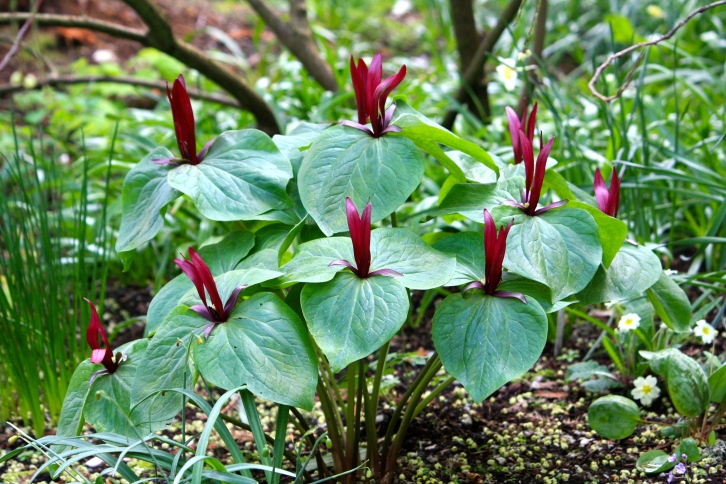 Trillium chloropetalum can take seven years to flower from seed

And then there’s the soil. If I had a pound for every plant that’s catalogue description noted a preference for well-drained, humus-rich soil I might actually be able to able to afford a garden that offered such rarified conditions. A great woodland garden requires the gardener to fashion deep, fertile planting pockets in the gaps between thirsty roots. Leaves blanketing the ground every autumn call for arduous sweeping and raking. The reward is rich leaf-mould, which will fuel the garden for seasons to come.

Epimediums are perfect woodland plants for counties with damp summers

In short, as with most things that look effortless (including ice skating, watercolour painting and Kate Middleton’s hair), woodland gardens take time, expertise and dedication to do well. One of my very favourites is the one at Knightshayes Court in Devon, as accomplished a composition as any great master ever achieved. In the humid West Country climate the verdure extends to every edging stone and fallen branch. And then at Sissinghurst the incomparable Nuttery is both deftly contrived and romantically naturalistic at the same time, guaranteed to make visitors stop in their tracks.

On a more intimate scale, but no less accomplished, is the woodland garden at Bosvigo, at its zenith in April (below). We visited early this month on a sunny morning and were fortunate to have the whole place to ourselves. Although not small by our own standards, it covers only half an acre under a canopy of beech and ash trees.

The scale of the planting is intricate, squeezing in a choice collection of plants without succumbing to bittiness. Certain plant groups abound. Quite apart from the hellebores, for which Bosvigo has become famous, there are large, well-curated collections of epimediums, erythroniums and anemones. 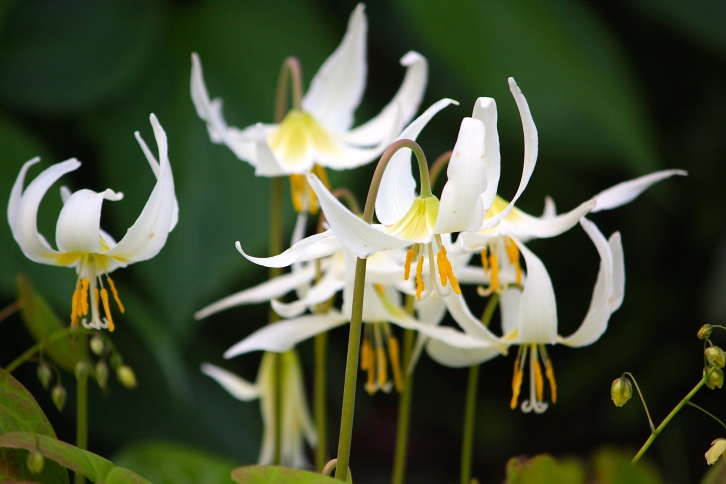 Bosvigo’s epimediums range from the diminutive to the exotic; varieties with jagged, red-splashed leaves and wildly spidery flowers such as E. ‘William Stearn’ share the same beds as tiny, delicate souls like Epimedium × youngianum ‘Niveum’. Clumps of peach, pink and white tulips are artfully positioned to bring out the best in the delicate, pastel-coloured flowers and coppery foliage.

In stark contrast to all this spring softness were the emerging leaves of an acer, uncompromisingly blood-red yet still frail, translucent and unaccustomed to the sun.

On the fringe of the woodland garden is a steep grass bank peppered with snake’s head fritillaries (Fritillaria meleagris), presided over by a young Magnolia stellata; a dreamy combination for even the smallest meadow space. My own attempts at growing snake’s head fritillaries have been ill-fated, although this year I managed to coax into flower a handful of the white variant between the inky black leaves of Ophiopogon nigrescens. 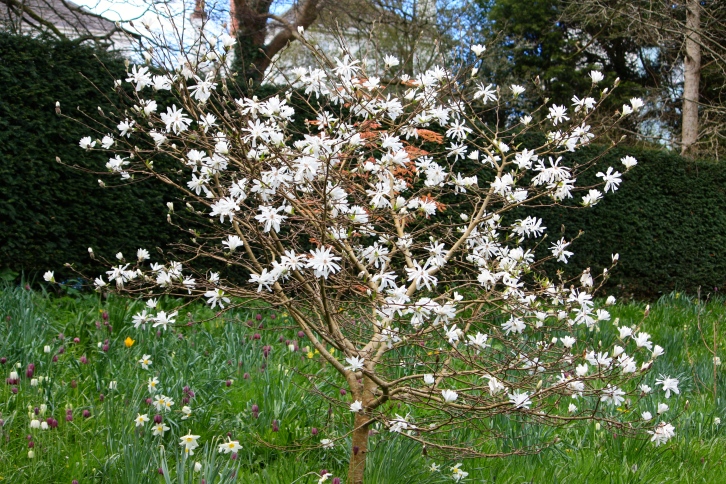 One is guaranteed to spot something unusual at Bosvigo, usually in the raised borders, which appear to have been hewn from solid rock at the back of the house. I believe the beautiful stranger below to be a podophyllum, probably P. ‘Spotty Dotty’. The umbrella-shaped leaves emerge from the ground in spring with markings like pheasants’ feathers. Mature plants will produce red flowers and fleshy fruits. Again, it’s one of those woodlanders that appreciates rich, moist soil and minimal disturbance. Those unusual leaves are perfect for creating texture and excitement amongst the inevitable bright greens of early spring.

At Bosvigo, owner Wendy Perry has created a garden for all seasons, appealing to connoisseurs and casual gardeners alike. Visitors are welcome from March until the end of September, Wednesdays, Thursdays and Fridays from 11am until 6pm.  Click here for more details and keep an eye out for the dates of Wendy’s special hellebore day in 2015.