It has been an almost perfect Easter weekend. There’s been sunshine for outdoor DIY, rain for the plants (they needed it) and sufficient time to actually get things done. We’ve seen friends, taken our new car for a spin in the countryside, been to the beach, played hide-and-seek and supped a fair few pints of ale. Our little town of Broadstairs, which Charles Dickens dubbed ‘our English watering hole’, put on a great show with sailing regattas and an Easter incarnation of the popular food festival. Shame on the local parks department, who left last year’s summer bedding in situ over winter, for letting the side down. I suspect council funding cuts are behind the poor show, which is very sad for a town which prides itself on its appearance.

In the garden I grubbed-up a large, shrubby rosemary and replaced it with Rosmarinus officinalis ‘Fota Blue’ which is semi-prostrate with deep blue flowers. The plants were purchased from local specialist herb grower Susan Gollins of Invicta Herbs. I am hoping they grow up quickly to fill the gap, but a neighbouring Astelia nervosa ‘Westland’ will be glad of the extra elbow room. Honey bees and bumble bees are flocking to the fresh new flowers of Echium pininana, which started to open on Thursday. They will be a magnet for pollinators from now until the first frosts. 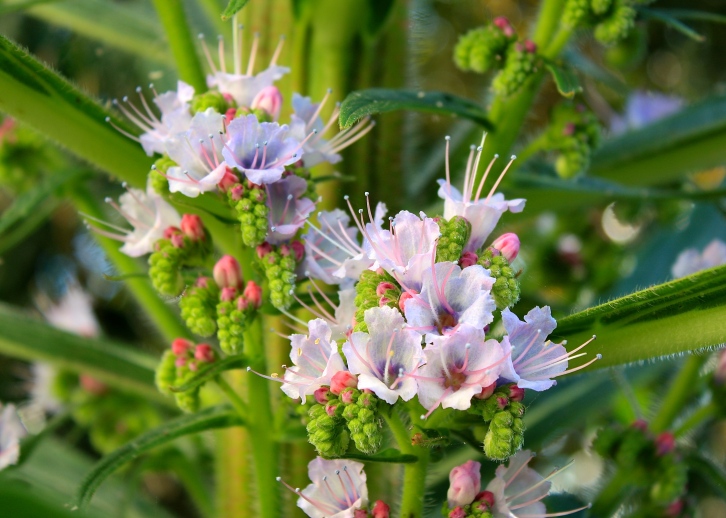 Echium pininana, a magnet for bees and butterflies

The food festival, held in the grounds of Piermont Park, was a great success. My top two stalls belonged to Dine Thyme, who make sausage rolls, scotch eggs and pies I’d walk across hot coals for, and The Four Candles, Broadstairs’ smallest pub, serving wonderful local ales. It was great to see so many truly local businesses, many not just from Kent, but from the Isle of Thanet, which has such a rich heritage of food production. The organisers should be congratulated for taking what was a very low key event and turning it into a real tour de force. We dined like kings all weekend, on food and drink bought exclusively from the festival. Best of all, there was hardly any washing up to be done.

I described it as an almost perfect Easter because we suffered two minor tragedies over the weekend. First, our collared doves, Daphne and Dudley, lost both eggs from their nest on Saturday night. It was entirely their own fault as their jerry-built nest, high up in a tree outside our bedroom window, was so shoddily constructed that even the slightest breeze was going to dislodge it. Nevertheless the smashed eggs were a sad sight to wake up to on Easter Sunday. Happily the lovebirds seem to be starting again, so hopefully we can still look forward to a clutch of chicks before spring is out. The second tragedy, if one can call it that, was of my own making: I stood on a garden chair to dig one of our raised borders and fell backwards, ending up in a most undignified position, fork still in hand. The bruises are blacker than Tulipa ‘Queen of the Night’ which is flowering nearby, but not nearly as pretty!

In a changing of guard the reign of Tulipa “Exotic Emperor’ is now at an end. Taking the throne is magnificent T. ‘Red Shine’, which is proving every bit as spectacular as its predecessor. ‘Red Shine’ is a fitting consort for equally well-bred T. ‘White Triumphator’, both with similar flower shape and regal stature. The blooms are rich, glossy vermillion with a dark centre; pure class. What will be left to bloom in May I don’t know; it seems spring may turn into summer before we know it.