When it comes to finding interesting topics for new posts, it can sometimes be a case of feast or famine. Just now, I have more ideas in my head than I can possibly commit to paper (or should that be screen?) and my camera’s memory card is chock-a-block with images I want to share. Not bad going for February.  Lest anyone think I’ve become unhealthily obsessed with hellebores (which I think I might have), I’ve decided my next two posts will bring the subject of these beautiful flowers to a close, for spring at least.

I had been determined for some years to get to Bosvigo’s annual Hellebore Day, and so neither the rail disruption nor a seven hour drive was going to put me off. Scoring a triple whammy, the journey meant I could see my little niece again and catch up on developments at Trevoole, my friends’ farm-cum-garden-cum-vibrant new local attraction. Rising early, we were queuing at the entrance to Bosvigo’s plant sales area at 9.15am, before even the crocuses had started to show their bright faces. 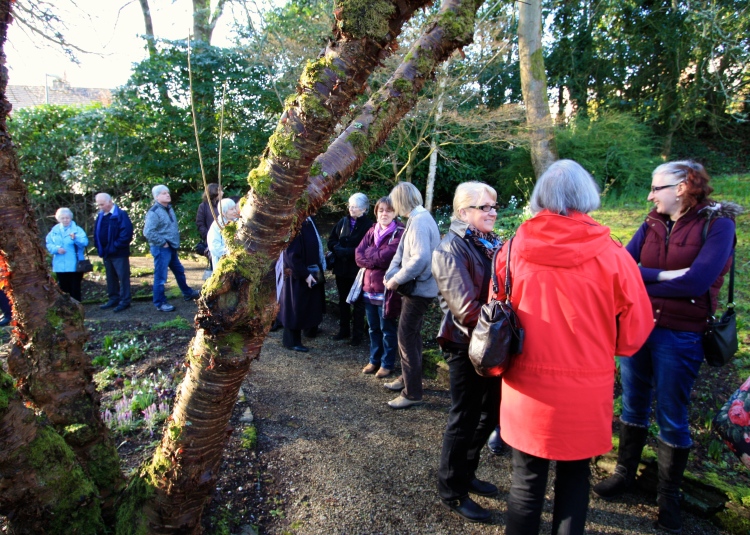 By 9.45am a long queue of prospective hellebore hoarders snaked back through Wendy Perry’s sunlit woodland garden. Typically there was a lovely, friendly atmosphere, all gardeners together hoping to bag a bargain or prize specimen. At 10am sharp the event was opened with great verve by Wendy (left) and BBC radio presenter and gardening expert Tracy Wilson (right).  Three, two, ONE and the ribbon was cut!

The hellebores, of which there were several hundred on offer, were carefully ordered into singles, doubles, those with speckled flowers and those with unusual colouration. A corner was devoted to plants of lesser pedigree for between £1 and £3 – a bargain for anyone needing a number of plants to fill a large space. I have notoriously expensive taste, which combined with very little space to fill meant I dived straight for the plants of real breeding, which commanded prices between £12 and £13.50. That may sound like a lot to some of you, but these were the stallions of the hellebore world, bearing marvellous double flowers in heavenly colours. I am saving the best photographs for my next post, but can’t resist whetting your appetite with one of the runners up, below.

Within about 60 seconds the first purchases were being made by the more decisive plant hunters. Clasping a modest but heavy quartet, I was quickly parted with the best part of £50. Proceeds from the hellebore sales go toward the upkeep of the house and garden. Booty safely stashed in the car we were straight back to the house, where an amazing buffet was being served in the lovely old kitchen, complete with roaring fire and a dresser to die for. The money Wendy and her team of helpers make from refreshments goes to ShelterBox, a charity that provides emergency shelter and vital supplies to communities overwhelmed by disaster and humanitarian crisis.  This year Team Bosvigo raised £2250, enough to supply 4 boxes to people in desperate need. For that Wendy sincerely thanks all who visited. 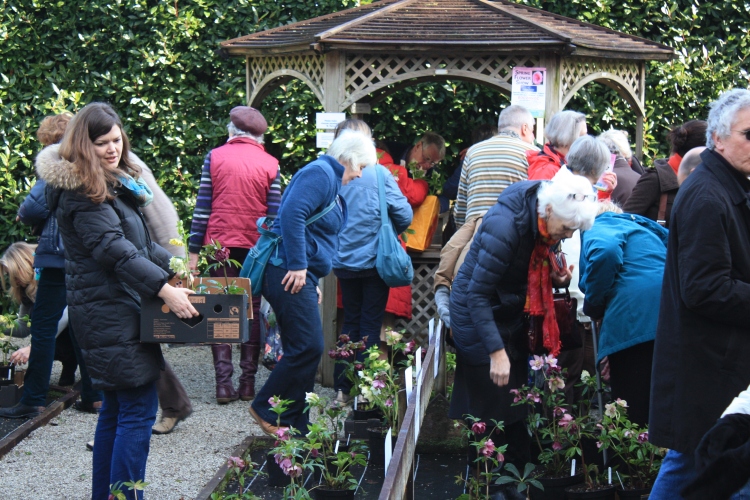 At first the idea of eating pasties and cheese and pickle sandwiches at 10.30am seemed a little strange, but I find it doesn’t pay to think too much about these things. Replete, it was time to venture back out into the sun to appreciate the gardens themselves. Apart from hellebores there were early camellias, tiny Narcissus cyclamineus, primroses and snowdrops aplenty to admire. Photographed below is Wendy’s cat Queenie, the sole member of the Bosvigo Feline Galanthus Appreciation Society (BoFGAS).  Like all cats she was utterly unfazed and disinterested in the hoards invading her impressive territory.

Wendy is an accomplished hellebore breeder and creator of the ‘Bosvigo Doubles’ seed strain. Little strands of coloured wool tied to some flowers gave away the blooms that Wendy has selected for cross-pollination. These will eventually bear the seed that will perpetuate her hellebore dynasty, each time producing new and potentially exciting variations. The plant below exhibits Wendy’s preferred traits; stocky stems, clear colouring and flowers that hold themselves nicely aloft.  As they say in Cornwall, ‘Ansome! 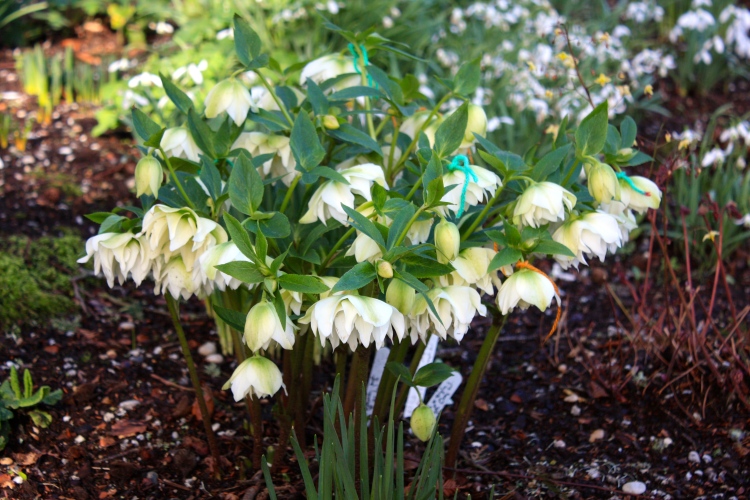 Anyone with an interest in hellebores, or simply a desire to get out and admire a fine spring garden would thoroughly enjoy Bosvigo Hellebore Day.  I’ll be sure to keep you posted about next year’s date as soon as it’s released. Meanwhile, the gardens are open from March to the end of September; Wednesdays, Thursdays & Fridays from 11am until 6pm.  Adult admission £5.00.  Wendy recommends a visit in April to see the woodland garden in its prime.

And just to prove I haven’t fallen hook, line and sinker for these scintillating stars of spring, I’ll round off with a photograph of some of Wendy’s equally crowd-pleasing crocuses.

Purple, burgundy and plum tones now starting to creep in as May approaches. The big crescendo will not be many days away now.
Spring fresh.
Now that’s more like it!
Bulb field update! Turns out a week of sunshine makes quite a difference.
Happy Sunday everyone. Although there’s still a distinct chill in the air, it’s beautiful in the sunshine.
It’s been a very subdued week as I’ve been fighting off a nasty tummy bug. Fortunately it’s been so cold that nothing has really grown over the last seven days and it’s been much too chilly for seed sowing. Hopefully by tomorrow I’ll have mustered enough energy to get back out in the garden again.
Loading Comments...
Comment
×
<span>%d</span> bloggers like this: