To call this winter a wash-out would be something of an understatement. Parts of the country have experienced double the average amount of rainfall and vast swathes of countryside are still under water.

When the rain stops and the sun comes out, as it did last Sunday afternoon, it is cause for much celebration. We had been cooped up indoors all weekend when the clouds briefly cleared to reveal Broadstairs in dazzling technicolour.  On went the boots and out we sped to join other hardy Thanetians on the seafront. 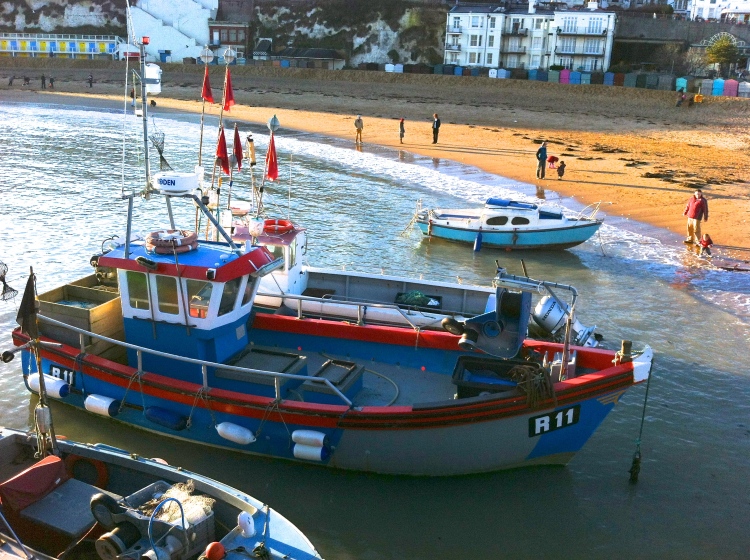 By 3pm the sun was already low in the sky, creating long shadows and bold contrasts. Where rays of light found their target, details were picked out with extraordinary clarity, the blues, reds and whites given an amazing richness. The sand (what’s left of it after a series of tidal surges) was rendered the colour of toffee, swept clear of pebbles and seaweed.

The cliffs between Broadstairs and Ramsgate have experienced a number of minor rock falls this winter.  Thankfully they are nothing like those that we watched on television around the coast of Norfolk and Sussex, where homes were lost to the sea.  In the photograph above, Him Indoors hunts unsuccessfully for fossils.  Thanet’s chalk cliffs are renowned for their petrified sea urchins, sponges and corals, but we have never found any.  If we are honest we are not all that sure what we are looking for!

For hungry birds there are still berries in abundance.  These windswept cotoneasters were laden with fruit, clearly not to the liking of seabirds and sparrows.  Again, the blues and reds in this scene were wonderfully saturated.  As the sun started to approach the horizon it was time to turn back, get the wood burner lit and put our feet up with a pile of seed catalogues before the next storm hit. 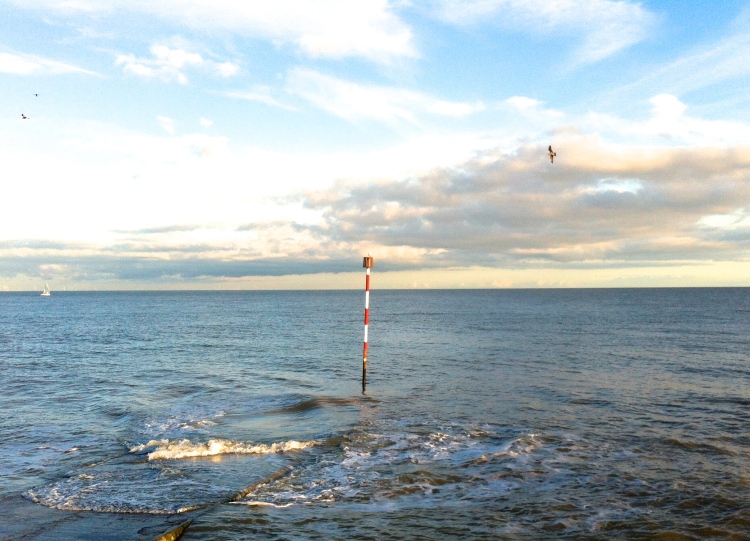 2 thoughts on “Between the Storms”

Library light.
Happy Friday everyone! What a beautiful morning ❤️💕
Tulip ‘Peppermint Stick’; as elegant in bud as it is in bloom. Flowers rolled tighter than a gent’s umbrella unfurl to reveal pointed, magnolia-like chalices. I’ll be planting five times as many of these next year. T. ‘Peppermint Stick’ is perfect for small pots, but appreciative of a little support in exposed locations.
Just when I thought this week was beyond redemption, along came the radiant @thunderfairy, accompanied by the charming @alan_gray_erov, to sweep me into the gentle arms of their Talking Dirty podcast. Now everything is right with the world again. Thank goodness my tulips and daffodils survived the long-awaited rain for my show and tell. My desk has never looked prettier!
We decided to remove the window boxes at the back of the house to get a better view into the Gin & Tonic garden from the library. Can’t believe how much better it looks despite the wind’s efforts to savage my tulips.
Hyacinth ‘Dark Dimension’. What do we think? Desirable or dastardly?
Loading Comments...
Comment
×
%d bloggers like this: