My favourite architect by a country mile is Edwin Lutyens. Often described as a genius, he is most lauded for his Surrey country houses, war memorials and his masterplan for Imperial New Delhi.

Castle Drogo in Devon is one of Lutyen’s lesser known and farthest flung masterpieces, and one I could never tire of visiting. The fortress-like castle, the last to be built in England, in many ways reflects the harsh brutality of the moorland fringe on which it sits. It appears much older than its years, completed as it was for the newly rich Julius Drewe in 1930. From the outside one might imagine a cramped and uncomfortable house, but inside it offered the Drewes all the mod cons of the period, including electricity, lifts and shower baths. Lutyen’s experiment with asphalt, at the time a new material for waterproofing flat roofs, was less successful. By 2012 the castlewas leaking like a sieve. As a result the National Trust have embarked on a major restoration, which will take five years to complete. The work involves the removal and replacement of hundreds of tonnes of light grey Dartmoor granite via a complex scaffold.

Scaffolding, imported from Norway, cannot come into contact with the Grade 1 listed building. It has to withstand 125mph winds as well as the weight of the stone.

The castle is grimly magnificent. However for me the gardens are Drogo’s greater attraction. The Drewe family wanted a fashionably formal garden but the grounds offered only exposed stony slopes with little in the way of shelter. Having planted a shelter belt of beech trees, Lutyens devised a long garden with a croquet lawn at the top, leading through an informal area of exotic shrubs and trees, terminating with a chequer-board rose garden. 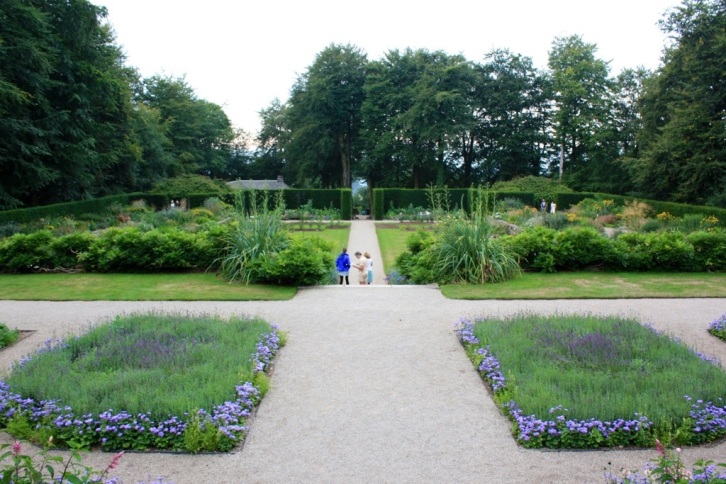 Looking down towards the rose garden

As with all Lutyen’s work the garden is complete in a sense that very few other gardens are. Lutyens stipulated every detail of the structure and bought the Dartmoor landscape into the design using long vistas. In this instance he did not work with Gertrude Jekyll, but a Kent based plantsman and designer called George Dillistone. Lutyens provided the grand scale and architectural structure that his clients desired, including winding terrace walks in patterns inspired by his recent work in India. Dillistone took this formality and softened it with luscious planting, creating a scene which even today looks like a romantic Edwardian painting. 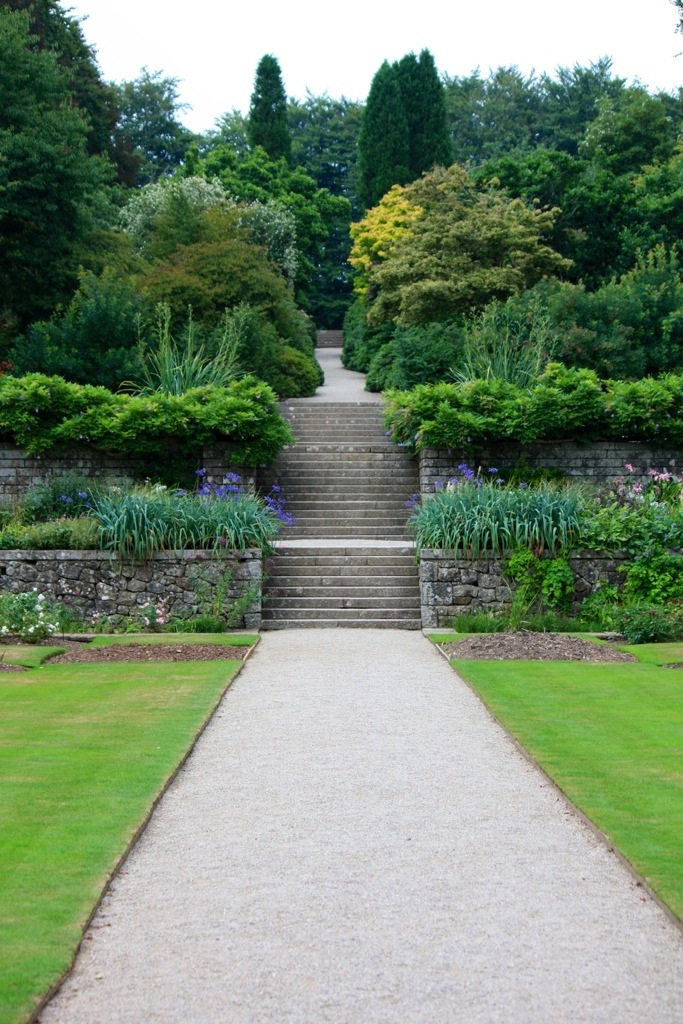 In each corner of the square terraces is an arbour, the sides formed from yew and the roof from neatly trained Parrotia persica ‘Pendula’. These replace the original weeping elms which must have succumbed to Dutch elm disease. A simple planting of hart’s tongue ferns (Asplenium scolopendrium) and European wild ginger (Asarum europaeum) carpets the cool ground beneath. 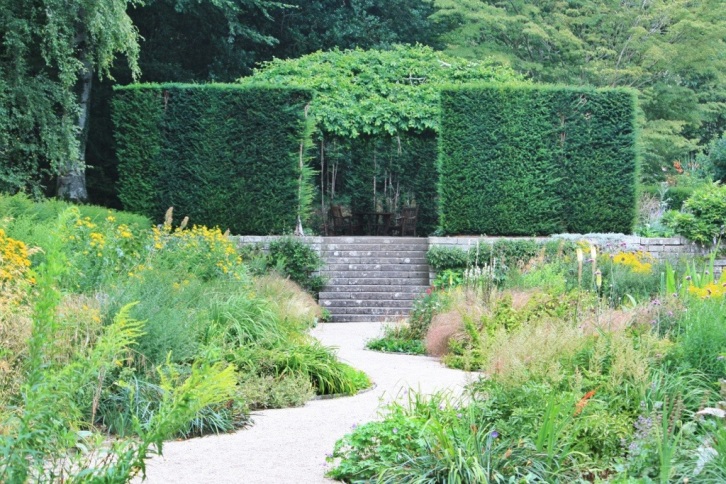 Lutyens’ arbours – the yew has recently been cut back hard to reduce the bulk of the hedge.

In late summer the terrace borders are at their zenith, nicely overblown and full of flowers. Dillistone created mixed plantings of tree peonies, agapanthus, echinops, kniphofia, sisyrinchium and heleniums down opposite sides of the garden.

Granite walls at the top end are wreathed in wisteria and underplanted with tender Crinum × powellii and more vivid blue agapanthus – probably my favourite plant pairing in the whole garden. 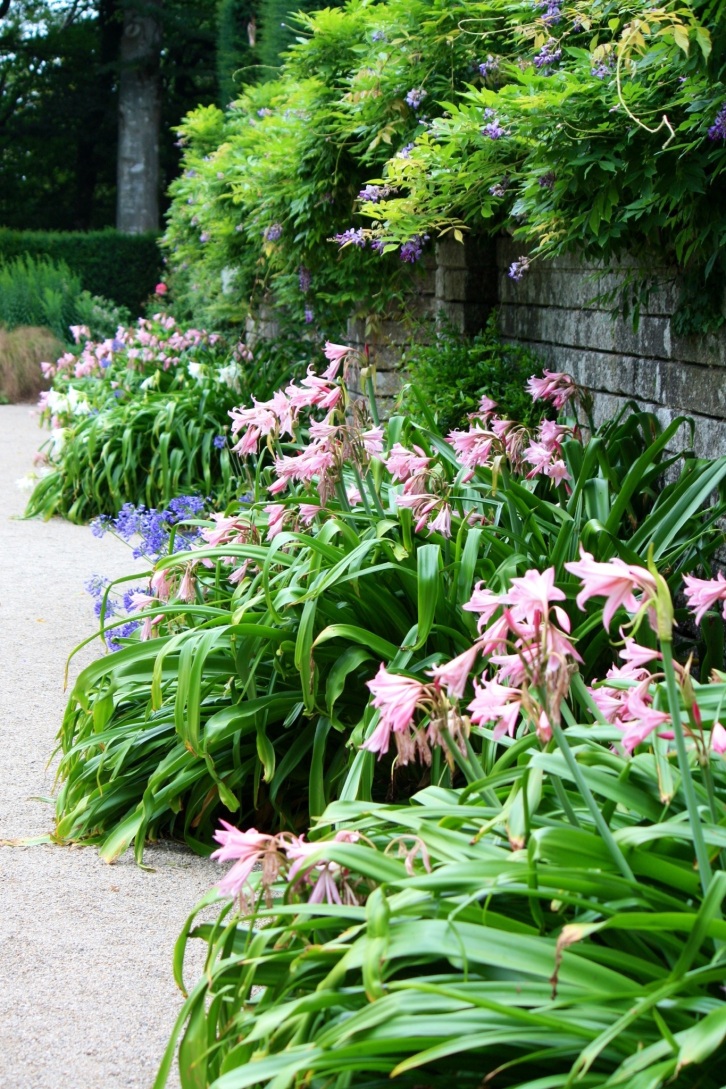 An Edwardian idyll – a terrace romantically planted with sun-worshipping flowers.

Up the stone steps in the fragrant garden, the dry, shaded ground is punctuated by fiery orange lilies and towering greyish-white Meconopsis wallichii. In this part of the garden, acid loving plants are cherished, including azaleas, magnolias, eucryphias and hoherias. 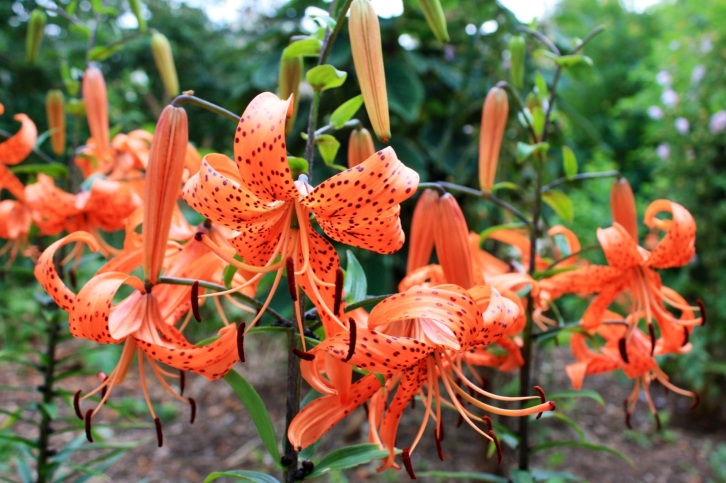 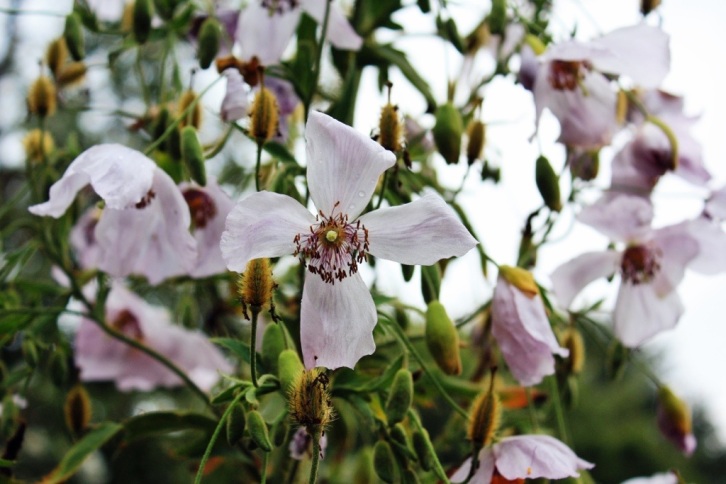 Meconopsis wallichii – a towering giant of a poppy.

Not content with building his own fantasy home, Julius Drewe also commissioned a miniature building in the woods for his children and grandchildren to play in. Known as the Bunty House, the tiny front garden is planted with begonias, rudbeckias and euphorbias. 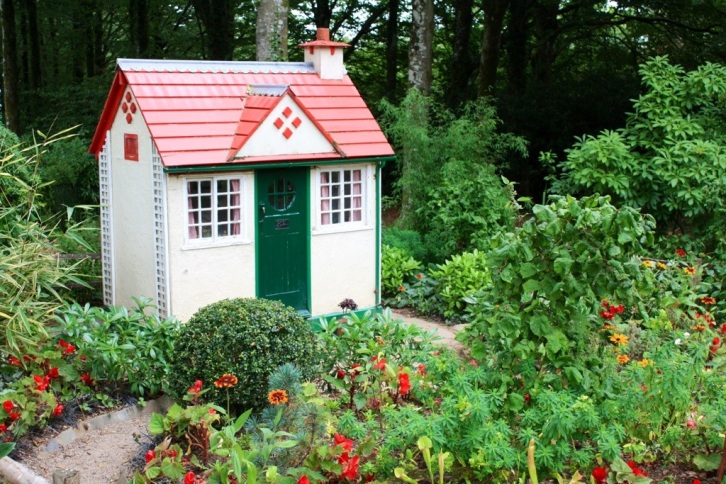 Nowadays we’ve grown accustomed to the excesses of celebrities and the newly rich. Castle Drogo stands as a reminder that this is not a new phenomenon. Lutyens’ extravagant designs of 1911 were never executed in full owing to the huge expense of the work, which was further delayed by WWI. Julius himself waited fourteen years before the castle was habitable and died only a year after it was finally completed. The castle is now setting its current custodians, The National Trust, back an incredible £11 million – enough hopefully to secure its future, and that of the gardens, for centuries to come.

Captions please ..... #maximilliansydneybruiser #mildredhermioneoprah #bythefire #inmylibrary #roaringfire #pamperedpooches #jackhuahua #patterjack #furbabies
Today was a library day. #rainyday #thewatchhouse #roaringfire #bookcollector #interiordesign #chandelier #periodhome #library #prideandjoy #homesweethome
A home isn’t a home without plants. Here are a few ways I use houseplants at The Watch House. Carefully chosen, there’s a plant for almost every situation (apart from the cupboard under the stairs!). More in my latest blog post at The Frustrated Gardener | link in bio. #inmyhome #thewatchhouse #houseplants #greenroom #potplants #foliageplants #greeninterior #windowsillplants #dieffenbachiareflector #gardenroom #cacti #succulents #opuntia
‘I want to be alone’. Maximillian Sydney Bruiser plays it cool this Valentine’s Day. He loves me really. #maximilliansydneybruiser #thewatchhouse #cutepooch #jackhuahua #andpose #dogsofinstagram
The ‘Snow Moon’ rising over Broadstairs harbour last night. Fat chance of seeing anything through the driving rain tonight ☔️ #snowmoon #broadstairs #harbour #moonrise #thanetlife #clifftopview #stormciara #twilight
The calm before the storm. Everything was either tucked away or staked up yesterday, before Ciara arrived. Each of those pots is packed with spring bulbs; mainly tulips and narcissi. They’ll be safe and soundly below ground. #stormciara #inmygarden #thewatchhouse #greengarden #wintergarden #patio #terrace #courtyardgarden #geraniummaderense #beschorneriayuccoides
%d bloggers like this: