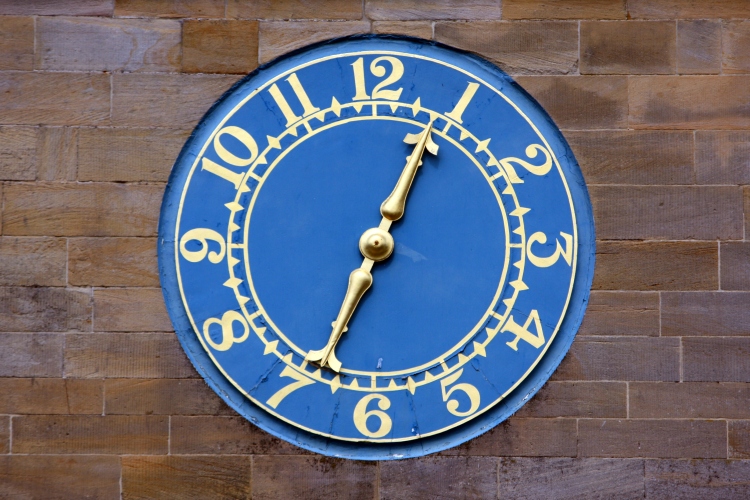 Northumberland is a wonderful, wild, unspoilt county in the north of England, once the frontier between rampaging Celts and civilised Romans. The region is noted for its landscape of high moorland and forests, and is mostly protected as a National Park. Northumberland is also the most sparsely populated county in England, with only 62 people per square kilometre. However it is not without splendour or refinement. The great Capability Brown, who himself worked on the landscape at Wallington, was inspired by these bucolic Northumbrian scenes, going on revolutionize the country’s attitude to garden design and creating what’s known globally as the English Landscape Style.

Wallington Hall lies only a stone’s throw from the village where Lancelot ‘Capability’ Brown was born and is every inch a stately home. Although in the hands of the National Trust since 1941, it was home to the Trevelyan family for centuries. The last remaining Trevelyan to live there, Patricia Jennings, died this June marking the end of an era.

The gardens immediately surrounding the house, and the woodland walks in which Capability Brown had a hand, are beautiful but unremarkable. Visitors need to venture a little further to discover the treasure of Wallington, the distant and secluded walled garden, created during the Edwardian period.

The long, sloping enclosure is entered through Neptune’s Gate, presided over by a fine figure of the Roman god himself. Quite why this entrance is dedicated to Neptune I am not sure, for Northumberland is not found wanting when it comes to water. Perhaps it’s because a small stream originates close the the gate, spouting into the Mary Pool and exiting the walled garden through a small pond, surrounded by hostas, ferns, ligularias and handsome Inula magnifica. 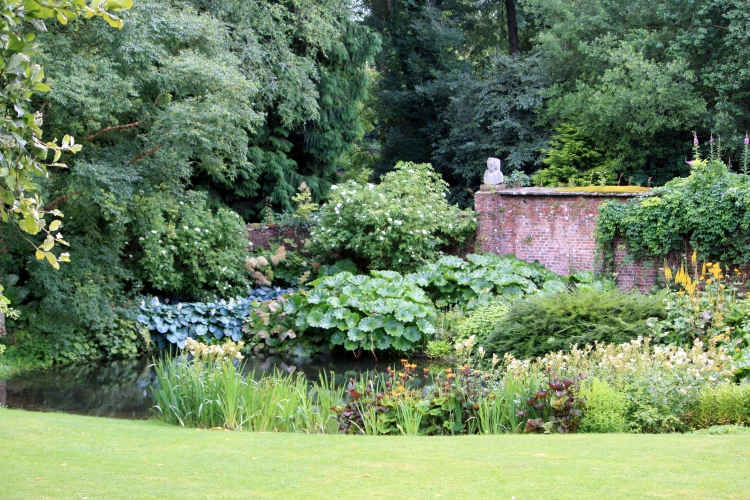 Presiding over the whole scene, and enclosed on one side by high walls and woodland, is the gorgeous Edwardian conservatory. I covet buildings like this, simply because they don’t make them like it any more. I also know that I’d be sublimely happy if I was ever to work in anything of this size and quality. Just think of all the things one could grow ….. and how much it would cost to heat!

A brief but thundery shower drove us into its warm, humid confines. 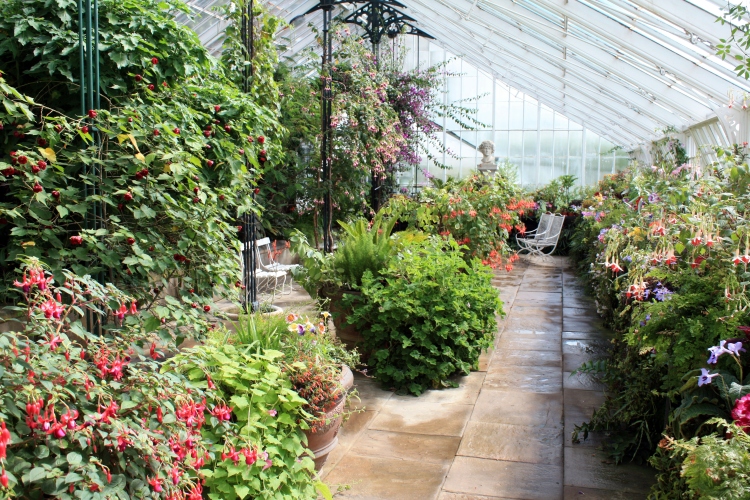 The elegant iron supports were draped with lovely shrubs and climbers, including lilac-white Heliotropium arborescens, blood red Abutilon ‘Nabob’, Bougainvillea ‘Alexandra’ and Mandevilla suaveolens. I’ve waxed lyrical about Fuchsia ‘Rose of Castile in a previous post, but what a lovely setting this is to display tender plants in their full glory.

Occupying a huge, ornate terracotta urn was another Fuchsia, ‘Orange Drops’. From what could only be described as a ‘trunk’, sprouted vigorous shoots laden with flowers the colour of tiger prawns and almost as delicious. Needing protection from frost, this variety makes a lovely weeping standard.

Just as in Edwardian times, the conservatory’s benches were rammed with hundreds of flowering and foliage plants, including coleus, pelargoniums, streptocarpus, plumbago, begonias, salpiglossis and amaryllis, creating a mouthwatering display.

Near the entrance was a marble tablet inscribed with a quote found on the Pincian Hill in Rome:

‘When wearied and over-wrought by study or affairs of business, repair to these haunts and refresh your mind by a stroll amidst the flowers.’

The storm passed over and we decided to brave the last few spots of rain. The long terrace, from which grand ladies must once have surveyed the pleasure grounds below, was punctuated by statues of various characters including the goddess Flora and the Italian clown Scaramouche. Growing artfully beneath were ferns. The one pictured below was, I believe, Polystichum setiferum ‘Herrenhausen’.

Entering the walled garden proper, visitors are confronted with a masterful piece of garden and planting design, a sloping double border lined with blue and yellow flowers. It’s a unusual combination, which works better for a mix of the softer blues and lilacs of clematis and nepeta with the strident royal blue of delphiniums. At the end of the brick path is a sheltered yew roundel centered on an urn full of yellow and blue annuals.

And so begins a walk through an exquisite garden, full of pretty scenes and little surprises. At its peak during July was the flower garden in a sort of prairie style, brimming with asters, daisies, lupins, coreopsis and eryngiums. This must surely be many people’s idea of the perfect summer garden. From Him Indoors I got the familiar question ‘Why can’t our garden looks like this?’. I gave up answering this question long ago, but the main reason in this case is lack of sun rather than lack of will.

Wending our way back up to Neptune’s gate, a streamside planting featured this delicate pink Dierama, showering its flowers over the ground like sparks from a welder’s torch. It was clearly in its element in this damp but open spot.

Not quite as diminutive but equally essential in a moist, informal planting is Geranium psilostemon. I think this may have been ‘Gold Leaf’, slightly faded out this far into summer, but the vivid magenta flowers still borne in abundance.

We left the gardens as we had arrived, admiring Neptune’s rear one last time and passing into the woodland. Two ornamental ponds provide a haven for wildlife and must once have been surrounded by rhododendrons and azaleas, as was the fashion at the time of their creation. A number of huge Wellingtonias, Sequoiadendron giganteum, were dotted among the native species.

Wallington should be on any garden lover’s list when visiting Northumberland. It has excellent facilities and a good selection of plants for sale. As usual I departed with a selection wedged between my feet, on the passenger side of course, hoping to create a little bit of Edwardian magic back on my own patch.

Below, Wallington Hall from the ha ha.

Welcome to ‘mum of the day’!
It may be mid-October, but our dahlias are the most colourful they’ve been all season. Every additional day is a bonus now. We’re cutting bucket-fulls for the house while the blooms are still in good condition.
Dahlia ‘Nick Sr’ looking splendiferous on the allotment this afternoon. As October progresses his flowers are becoming ever more wayward and impressive. A single bloom in a bud vase lasts for days and makes the most fabulous eyecatcher.
A fabulous front garden in Vale Square, Ramsgate.
Dahlia ‘Hillcrest Regal’ - a mesmerising combination of wine red and grape.
An autumnal vista in the Jungle Garden.
Loading Comments...
%d bloggers like this: