It was a hot, dry and dusty Hampton Court Flower Show this year.  I returned home with my blue suede shoes looking more like I had crossed the Sahara than the City of London.  The summer sun made recording the show gardens on camera hard work, everything looking more or less bleached out. A bit of adjustment on the computer has corrected that and the blue suede shoes are brushed and ready to tread the streets of London again.

As I mentioned in my previous post, Britain’s Flower Shows are a great place for spotting gardening trends, and the show gardens didn’t disappoint. Dining à deux seemed to be de rigueur, with many show gardens making a focal point of pretty cafe sets or outdoor snugglers.  The advances in outdoor buildings for people, animals and insects were also much in evidence, so once again I found myself lusting over the contemporary garden studios and period greenhouses that I have no space for.

However, it’s the show gardens which take centre stage and here the trend was split between cool and hot planting, some designers combining the two. Perhaps it was no coincidence then that several gardens paid homage to Gertrude Jekyll, who through her work and books such as ‘Colour Schemes for the Flower Garden’ put her imprint on modern uses of warm and cool plant groupings.  I’ll return to hot colours in a later post, but for now, I’m chilling out with a succession of especially cool compositions.

The ultimate cool garden was also my favourite.  Entitled ‘Willow Pattern’ and designed by Sue Thomas, the scheme recreated a scene we’re all so familiar with in two dimensions.  A story of unsuitable love, the tale involves a wealthy Mandarin’s daughter who runs away with a book-keeper, escaping from her palace across an oriental bridge.    This was a garden I could not imagine wanting to escape from, especially on a hot day, surrounded as was was by lush hostas, hydrangeas and delicate clematis.  The silver medal seemed to me a little harsh, but the standards were incredibly high throughout this year’s show.  Sue, you got my vote anyway.

Two gardens in the conceptual category took cool to a new level.  The first was The Ecover Garden designed by the very talented Matthew Childs.  Whether or not you liked the strips of recycled plastic leaping like dolphins through the flowers, or the toilet cleaner fountain, it was hard not to appreciate the planting.  Even at the end of a long day, the delphiniums, Perovskia, Stachys and Agapanthus still sparkled brighter than crystal among a froth of white Gypsophila paniculata.  The garden’s aim was to reinforce that water is life and that pollution is an ever present threat to our natural environment.  It was this message, along with the quality of design and planting, that secured The Ecover Garden a coveted gold medal and ‘Best Show Garden’ award.

If The Ecover Garden wasn’t quite cool enough for you, the Tip of the Iceberg garden took the temperature down a notch or two.  Designed by John Esling and Caroline Tait it gave old fridges a new lease of life as building blocks and planters.  Each of the 36 fridges, complete with amusing fridge magnets and internal fittings, represented an alpine habitat filled with blue, purple and white flowers. 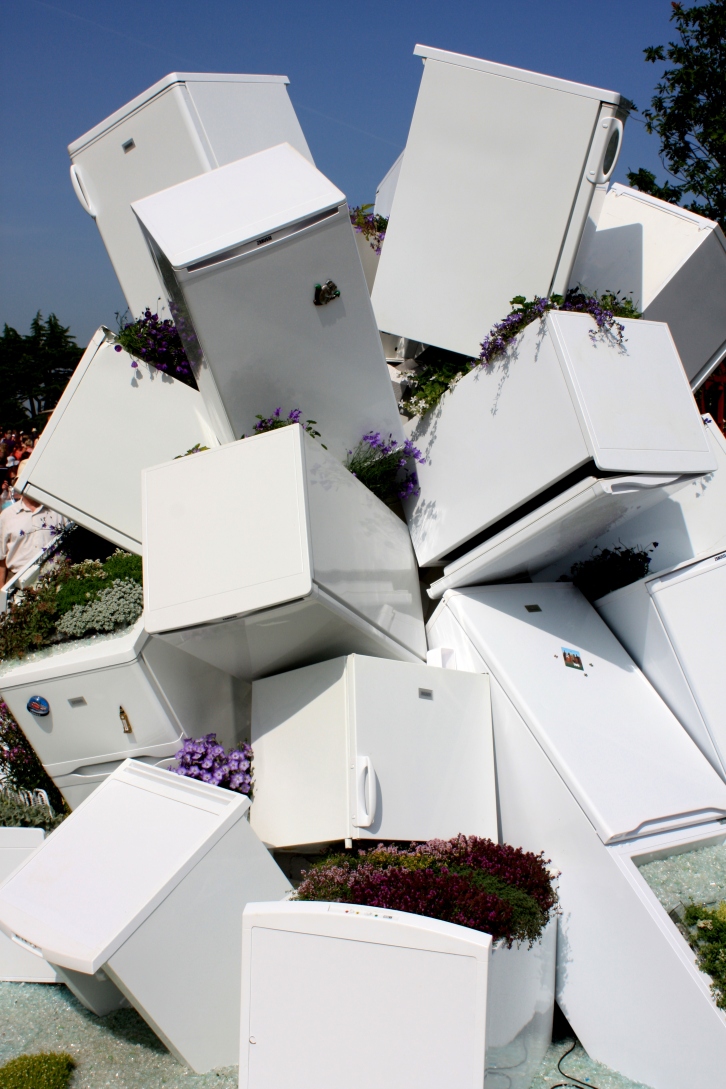 Tip of the Iceberg designed by John Esling and Caroline Tait

The designers were inspired Japanese gravel gardens, replacing traditional materials with clear glass chippings.  The fridges for the construction were supplied by Zanussi, having had all the harmful gases safely removed.   It’s perhaps not the garden feature of my dreams, but a darn sight more attractive than seeing them dumped unceremoniously at the tip.

It’s always intriguing to see what Hampton Court’s garden designers can come up with on a budget of £15,000.  This show garden category is know as ‘Low Cost, High Impact’.  Mark Harvey certainly came up trumps with ‘A Room with a View’, his sloping garden which rose up reclaimed wood stepping stones to a viewing platform. The tufts of rusty coloured grass you can see below belong to Carex buchananii.  When combined with Eryngium zabelii ‘Big Blue’, E. bourgatii, Perovskia ‘Blue Spire’, Gaura lindheimeri, Cupressus sempervirens and tiny Myrtus communis the effect is perhaps more macchia than tundra, but refreshing nevertheless. 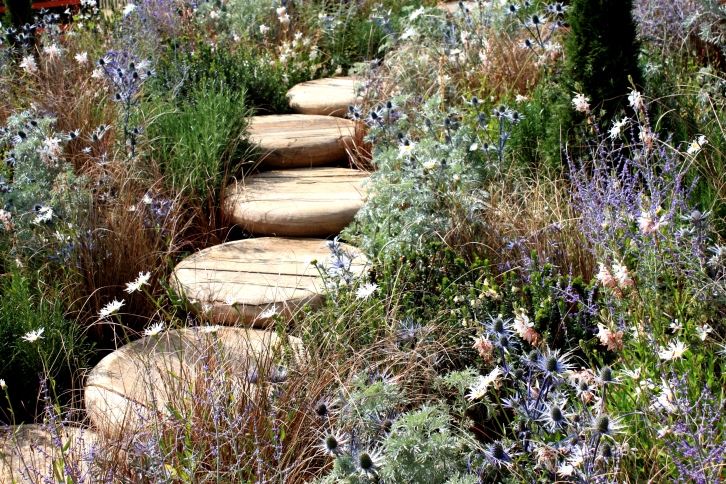 ‘A Room with a View’ designed by Mark Harvey

Finally, lest there be any mistake, Ruth Marshall named her design ‘A Cool Garden’, comfortably winning in the summer gardens category.  Here, the combination of cool planting alongside rusty foliage and metal was practiced again, in a design which will ultimately be picked up and recreated in a private spa complex.  Ruth’s inspiration came from the bomb-formed dells in her local woodland.  She anchored her complex scheme with four large Corylus avellana ‘Contorta’ (Corkscrew Hazel), providing welcome shade and an air of maturity.

This was a very articulate design which was greatly enhanced by the clever use of water and different levels.  It looked good from almost every angle. One of the joys of Hampton Court compared to Chelsea is that many gardens can be viewed from every side, and in Ruth Marshall’s garden a beautiful gate at the back of the plot provided one of the most interesting views into the space.

If I’ve given you the chills rather than thrills with all these cool gardens, check back again soon for some action at the hotter end of the colour spectrum.