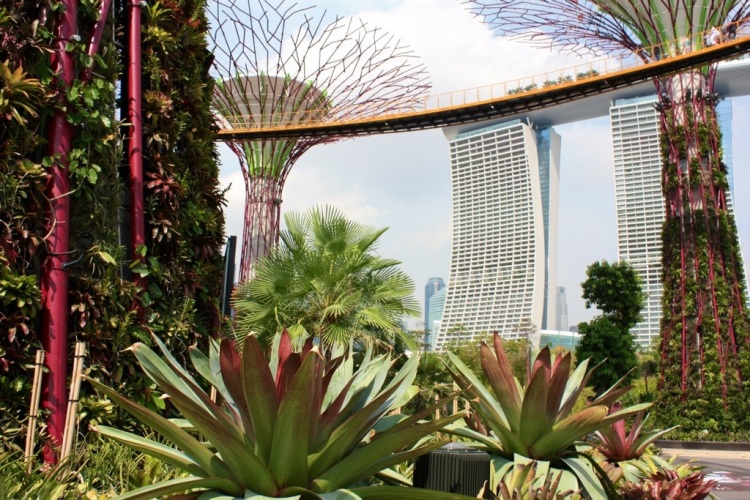 I’ve seen the future …. and it’s kind of strange!

There’s been lots in the UK travel press about the development of Gardens by the Bay in Singapore, so I was desperate to squeeze a visit into our 7 hour stop over on the way to Burma. Despite being groggy from a 12 hour flight, our lovely friends Louise, Rick and their little boy Archie treated us to a strong cuppa and then transported us in air-conditioned luxury to this horticultural extravaganza.

To describe the Gardens by the Bay to anyone in the UK, the simplest comparison would be with the Eden Project, in my beloved Cornwall. However this is Singapore, so everything has to be bigger, better and more high tech. And of course, when it comes to the conservatories, the tables are turned. No need to pamper tropical species in hot houses here, so the precious indoor space is given up to dry Mediterranean and cloud forest plants, which appreciate artificially cooler conditions.

The scale of what’s been developed here, on reclaimed land beneath the equally awesome Marina Bay Sands development, is little short of awe-inspiring. And futuristic to the point of feeling you’ve been transported forward in time about 50 years. The key features of this huge site are the Supertrees; huge sculptural plant displays which are lit up at night (below), the two cool conservatories and a series of heritage gardens, illustrating how plants play a part in the culture of Singapore’s main ethnic groups. Work continues on the eastern portion of what must be one of the horticultural wonders of the world. 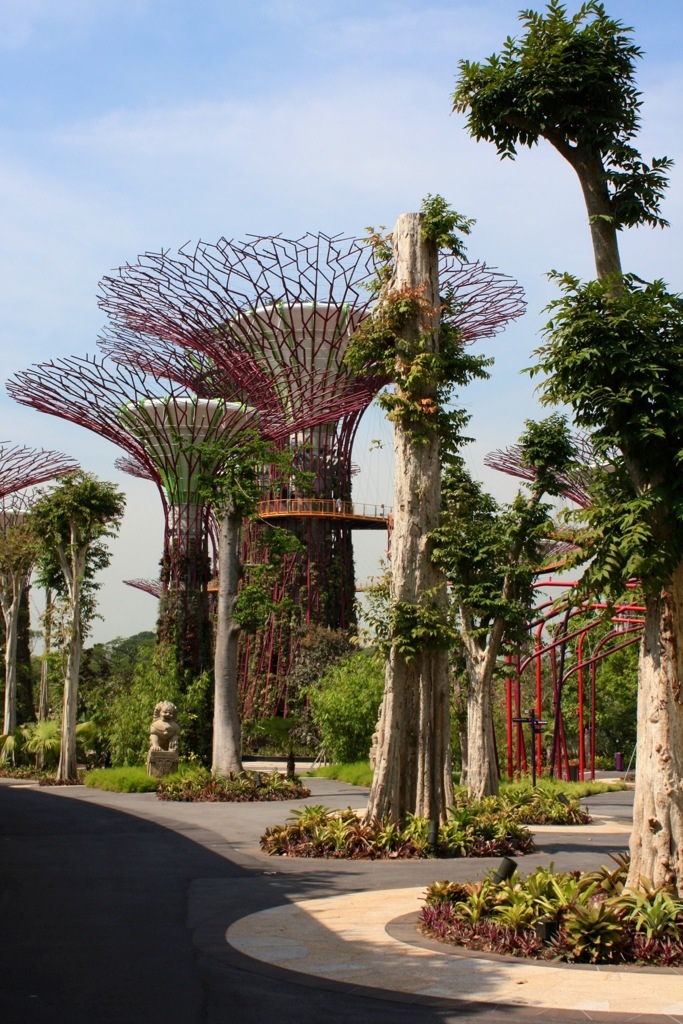 Us Europeans are not really built to function well in 34 degrees centigrade and high humidity, so we made a very quick tour of the heritage gardens, including the Colonial, Malay, Chinese (below) and Indian spaces, before retreating into the conservatories. I’m no connoisseur of ethnic gardens, but I’d have to say there was a fair amount of artistic license employed in the interpretation of these national styles. On the basis that this is a contemporary park I will make allowances, but in general they were not as attractive or authentic as they could have been. The gardens have only been open since June, so given a couple of years, perhaps they’ll come into their own. Things grow fast in the tropics! 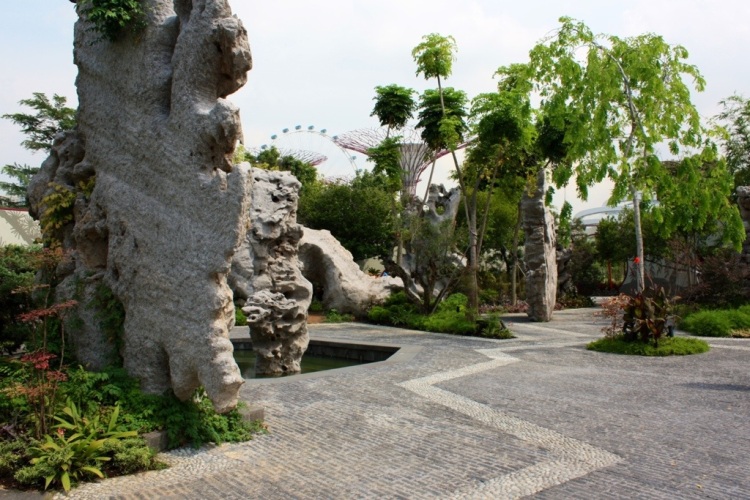 And as enormous and impressive at the Supertrees were, they were also something of an acquired taste, and I’m not referring to the restaurant that sits atop the biggest one. The intention appears to be that they’ll become covered in foliage, offering some much needed shade on the platform below. In the meantime only their bases are covered, with a jewel-like array of bromeliads, tillandsias, ferns and climbing philodendrons (below). It was fascinating to see them being watered, automatically from above, whilst groundsmen “fogged” the bromeliads to eradicate any rogue mosquitoes. 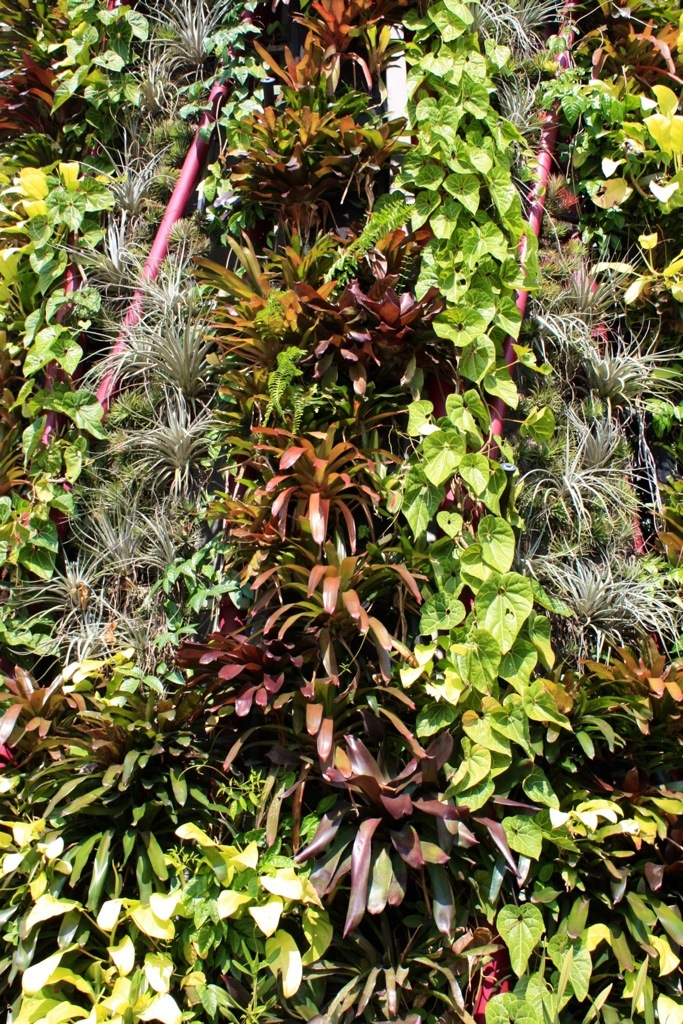 Nothing quite prepares you for entry into the cloud forest conservatory, except perhaps for the hint of cool, moist air as you approach the doors. On the other side, towering above you, is a 35 metre high man-made mountain, complete with thundering waterfall and tiered viewing decks. The effect is reminiscent of a Dalek in floods of tears. Not something one encounters very often! 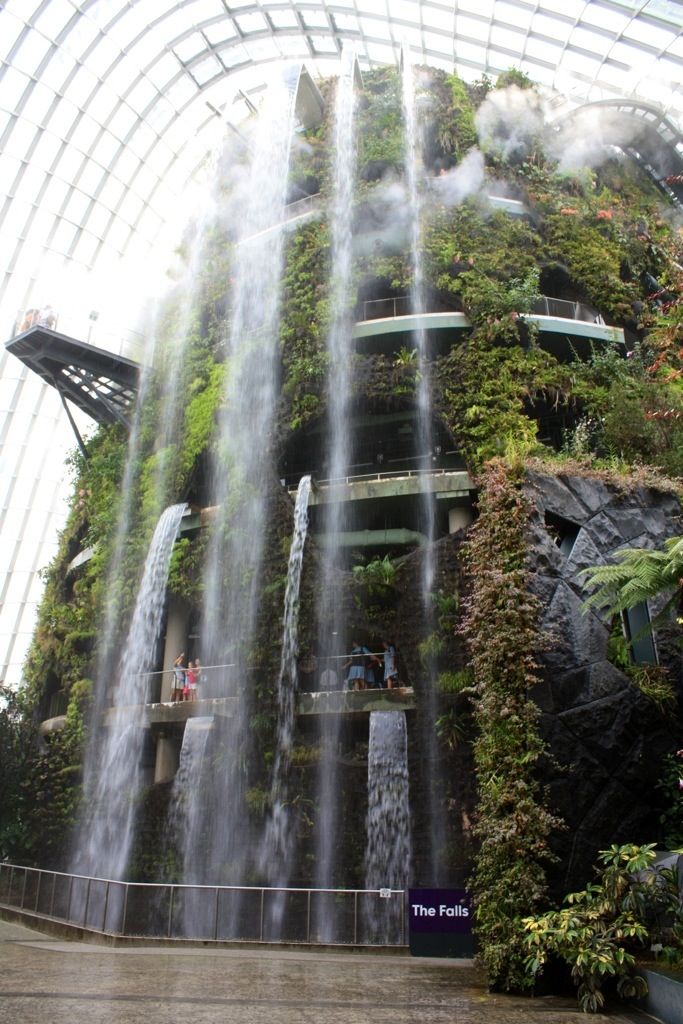 The exterior of the “mountain” is literally dripping in begonias, ferns, orchids (in their thousands), fuchsias, Streptocarpus and colocasias. These clothe 7 floors of educational exhibition space, which was attracting hordes of local school children. One floor was used to display a collection of stalagmites and stalagtites, another was devoted to climate change. However, it’s the views from behind the waterfall and of the vertiginous planting that most people come to see. The experience is enhanced by aerial walkways which carry visitors some way out into the void. From here you can appreciate the trees and ferns from above, and also see that the floor of the conservatory opens out into deep chasms of planting below ground level. I am not a great fan of heights, but this was worth the sweaty palms! 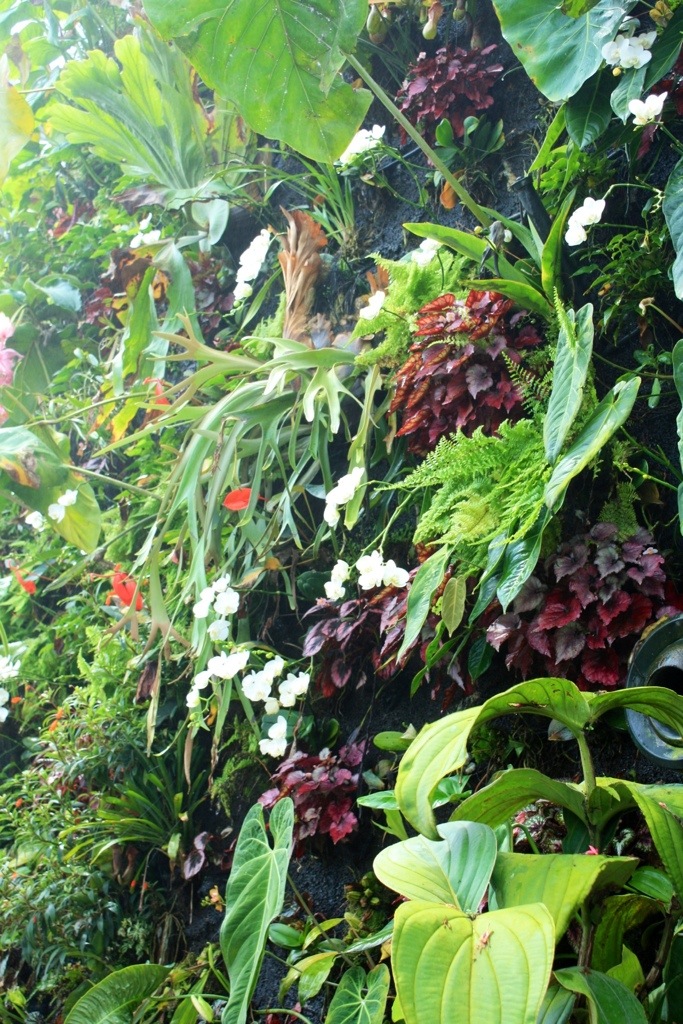 At the summit you could almost imagine you had arrived in genuine cloud forest, were it not for all the carved alligators and tribal masks emerging from the undergrowth. The highlights here are the stunning Vireya rhododendrons, in all their Barbara Cartland colours. Numbering over 300 species, vireyas can be found growing across much of South East Asia, principally in New Guinea, Borneo, Sulawesi, Sumatra and the Philippines. Although these are tropical regions, vireyas mostly grow in the cool mountainous areas, either as epiphytes high in the tall trees of the cloud forest, or on the ground in shrubby areas. 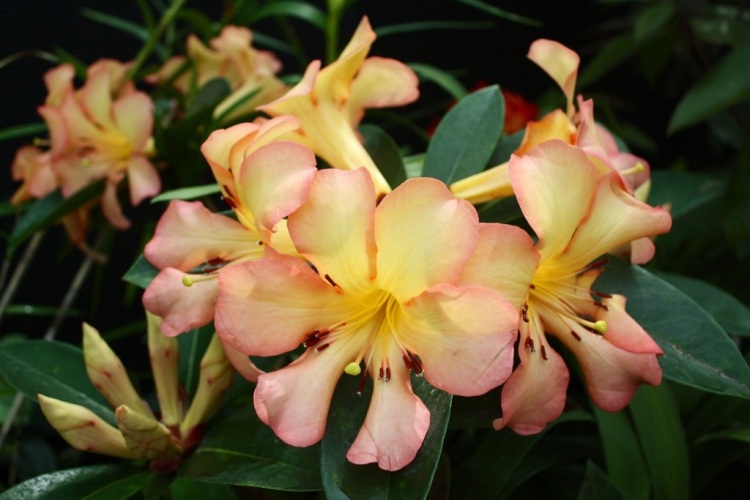 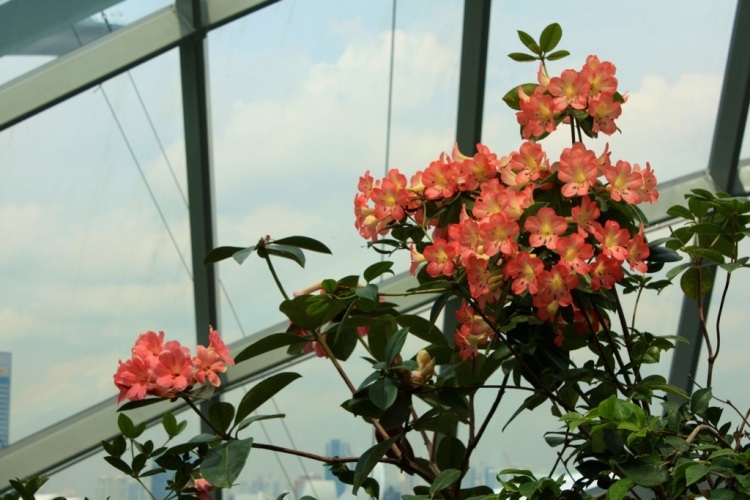 Also revelling in the cool mist being ejected from tiny jets in the ground were multicoloured orchids, such as the beautiful Phragmipedium “Sunset Glow” below. Growing alongside were insect-catching pitcher plants, maidenhair ferns (Adiantum) and more tillandsias, creating the feel of a prehistoric swamp. Once matured this foggy, high altitude plateau should look amazing. The maintenance must be incredibly intensive and not for the faint hearted! 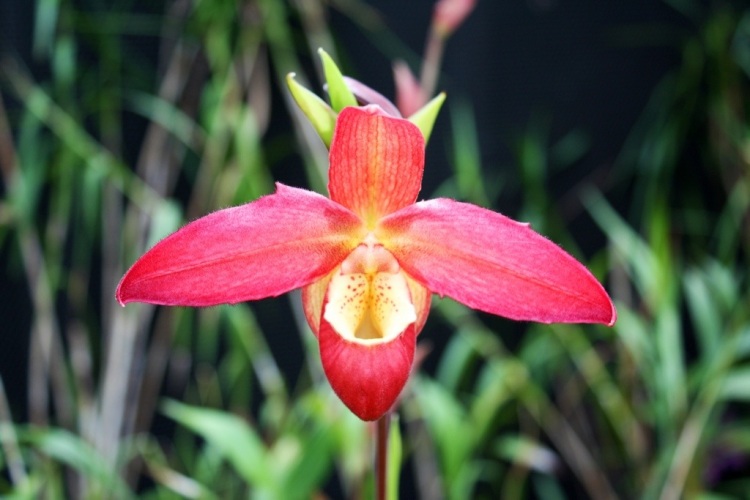 We descended via the aerial walkways to shady gorges which have been created below ground. Here, more ferns and shade-loving plants flourish in a fantasy scene of rocks, streams, carved wooden crocodiles and giant stone snails. A big hit with the kids, for whom this attraction has been really well thought out. 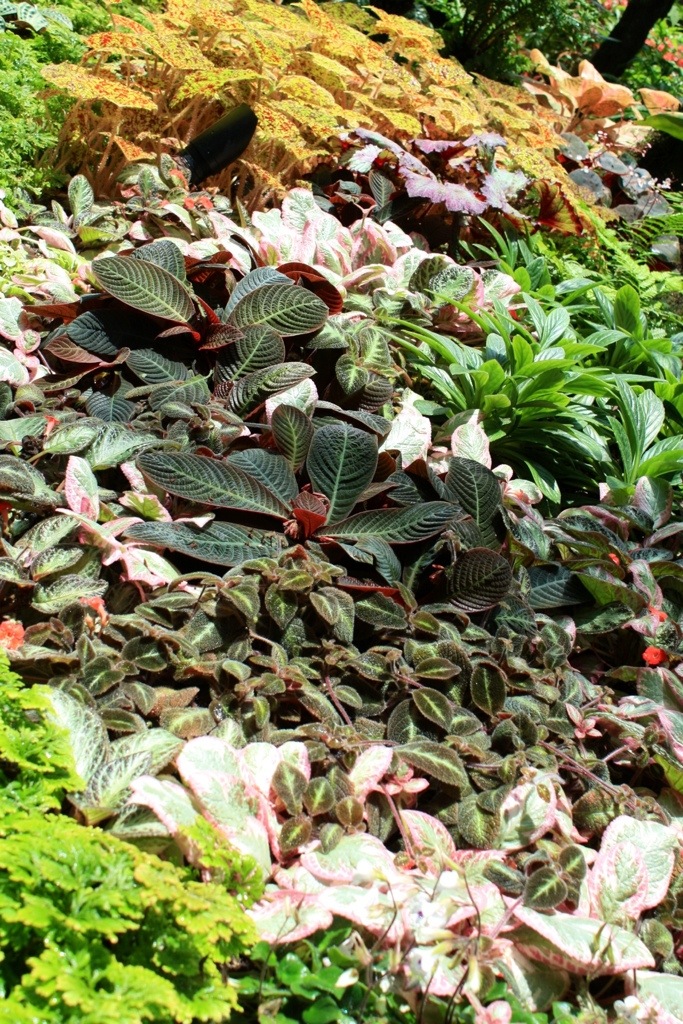 Whilst in some respects I felt Gardens by the Bay was more an exercise in proving what’s possible rather than creating something truly beautiful, it has to be admired for the sheer audacity of its scale and ambition. There are plans to re-route a major road which separates the gardens from Marina Bay Sands, making it even better connected with the city. The eateries on the site are also streets ahead of the overpriced, uninspiring offering we’re presented with at equivalent attractions in the UK, although The Eden Project tries. This is surely a global attraction in the making and I’d recommend anyone passing through Singapore to make time to see it. Just go early or late in the day to avoid the ferocious temperatures outdoors.

Below, Will and Kate visit Gardens by the Bay as part of their Diamond Jubilee tour in September 2012, planting tree to commemorate the Queen’s 60 year reign (photograph, The Daily Mail). 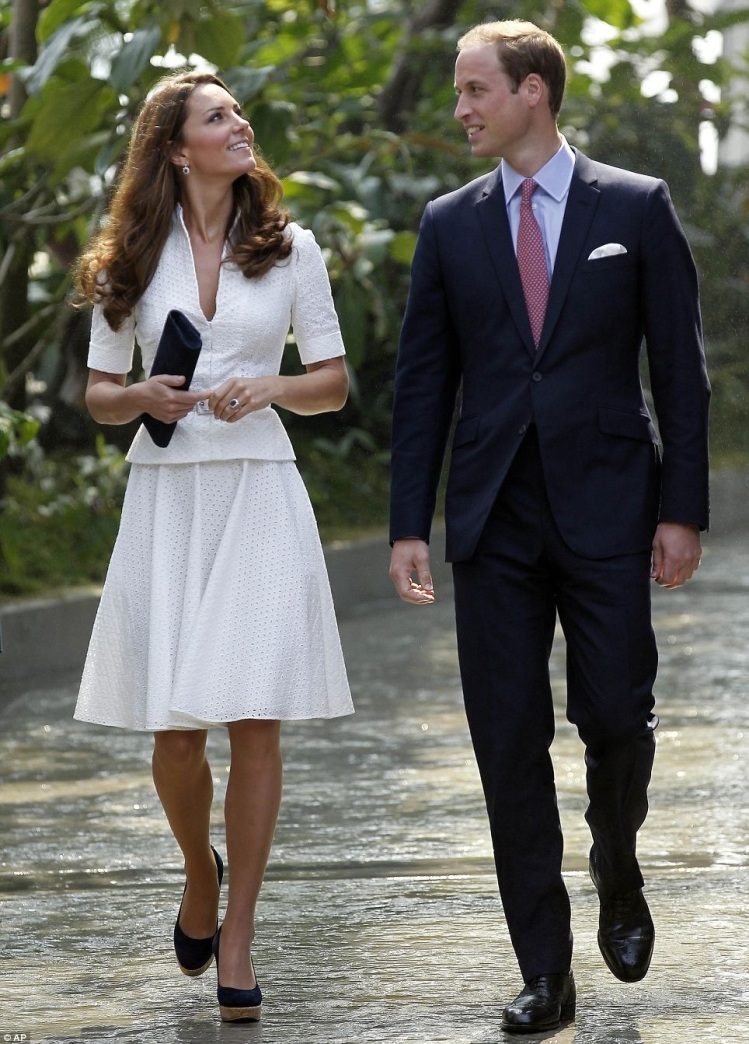 10 thoughts on “Back to the Future – Gardens by the Bay, Singapore”