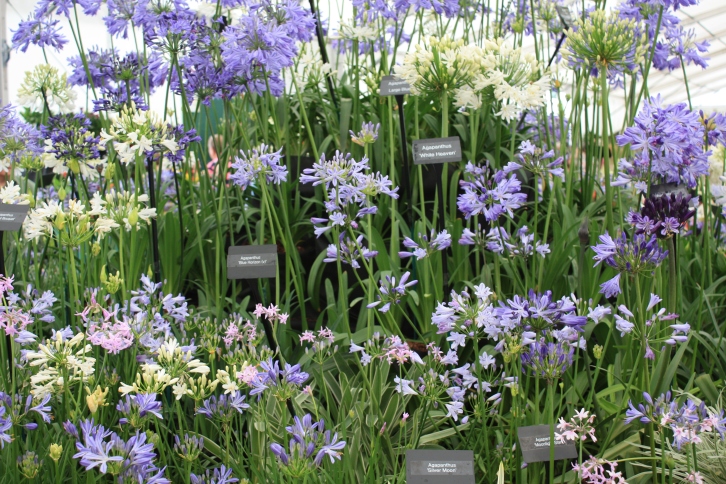 Agapanthus is the signature plant in our coastal garden and deservedly so.  We grow Agapanthus africanus, the largest of the family, hailing from the Cape of Good Hope in South Africa.   In some countries, and even in the UK’s Isles of Scilly, it can “go wild” and become a nuisance.  In our garden (below) it’s well under control but still reigns supreme, delivering an annual firework display of rocketing stems capped by explosions of blue flowers.  The flower heads start to appear in early July and go on right through into September – you can see the cracking display they put on in 2010 below.  Occasionally the odd one pops up out of season – last year we even had flowers out at Christmas. 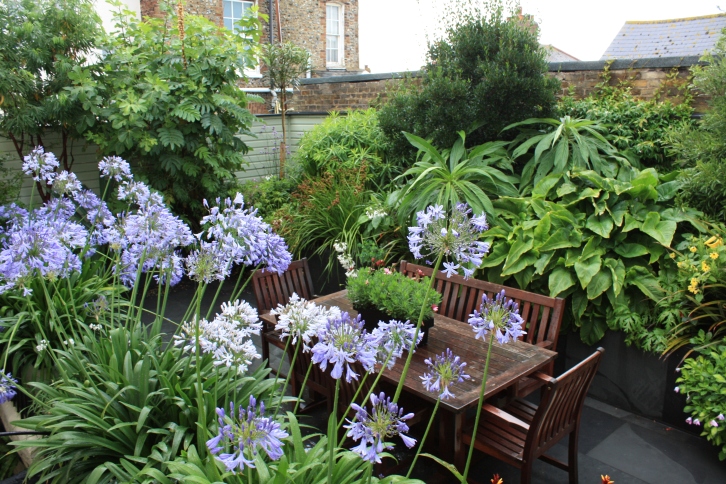 Agapanthus africanus can be incredibly variable in habit.  We have 12 plants in 4 long troughs, all purchased at the same time from the same nursery but no two plants are the same.  Some have wider leaves, others narrower; some flower abundantly, others hardly ever; some have short flower stems displayed at angles, others are tall and straight as a die.  Colour varies between pale blue and deep sky blue, but somehow that really doesn’t matter.  Interestingly the single plant which is always most sensitive to cold reliably produces the most flower spikes.  I guess the only way to achieve consistency would be to divide the best plants and weed out the weakest.  Next year could provide that opportunity, as after 5 years the wooden troughs are all close to collapse and will need to be replaced.  A big job I’d rather not think about! 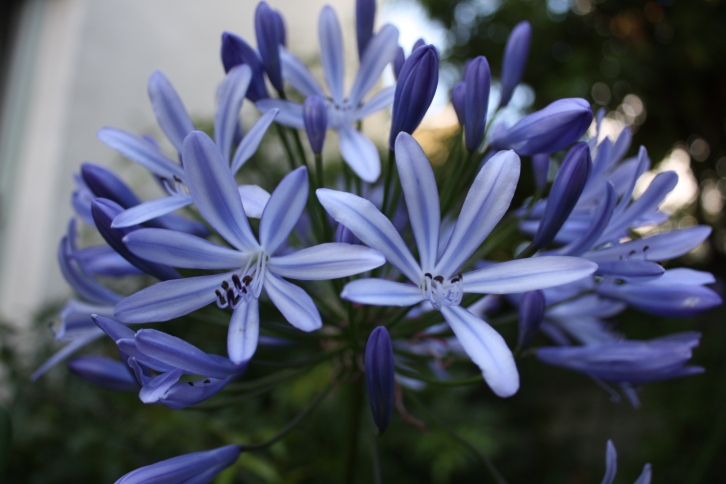 Agapanthus africanus was introduced to Europe at the close of the 17th century as a handsome greenhouse plant.  However in the south of England it is pretty hardy outdoors, sometimes dying right back in winter but this has never happened with us.  Under normal circumstances Agapanthus africanus is fully evergreen and therefore a great architectural plant.  It greatly dislikes snow or ice sitting on its leaves for any length of time and the damage caused can take up to 6 months to grow out.  Flowering can also be affected by too much cold.  Other than that our plants are generally problem free, except for occasional stunting caused by thrips, which are best stopped as quickly as possible.  I spotted an outbreak yesterday so have treated the effected areas with an insecticide.  A fungus, Macrophoma agapanthus, can also attack the foliage, causing the leaves to die back.  Symptoms include dead-tipped, lighter green olive leaves in the middle of the plant.  Treat this immediately with a fungicide. 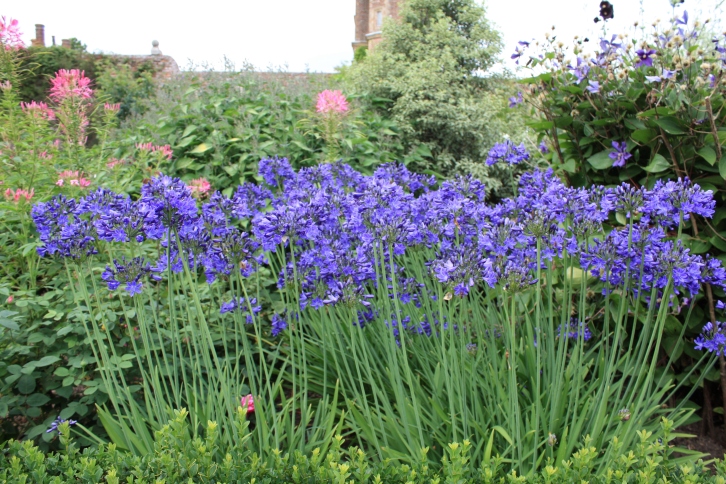 Most Agapanthus enjoy life in a container with a restricted root run where they seem to flower better.  They should not be allowed to dry out and it’s important to keep them moist at all times, but not wet.  They also prefer a sunny, open position and limited competition from other plants.  Above, at Sissinghurst, a herbaceous variety works well with box, Cleome and herbaceous Clematis durandii.  From April until September I water every couple of weeks with tomato food to encourage lots of flowers and generally this seems to work.  For some reason the quantity of flowers this years has been disappointing.  We normally expect about 80 stems, but are lucky if we have 40 at the moment.  I put this down to the combined effects of a hard winter, some unchecked damage by thrips in the spring and the increasing shadiness of the garden.  Hopefully we can reverse the trend and get numbers up again next year.

Agapanthus are not weakened if they are not deadheaded and they readily produce seeds heads.  On a couple of occasions we have left these on through the winter, only cutting them off as they are damaged by the wind and wet.  The consequence of this is seedlings appearing in every nook and cranny the following season – they can be as prolific as grass seed.  They can be easily pulled out and it’s worth the trouble for the pleasure of seeing the seedheads spangled with frost.

As well as Agapanthus africanus we grow deciduous white and dwarf blue varieties – both have long lost their labels but are reliable and do well year after year.  Below, our mysterious blue dwarf mingles with Aloe striatula by the front door. 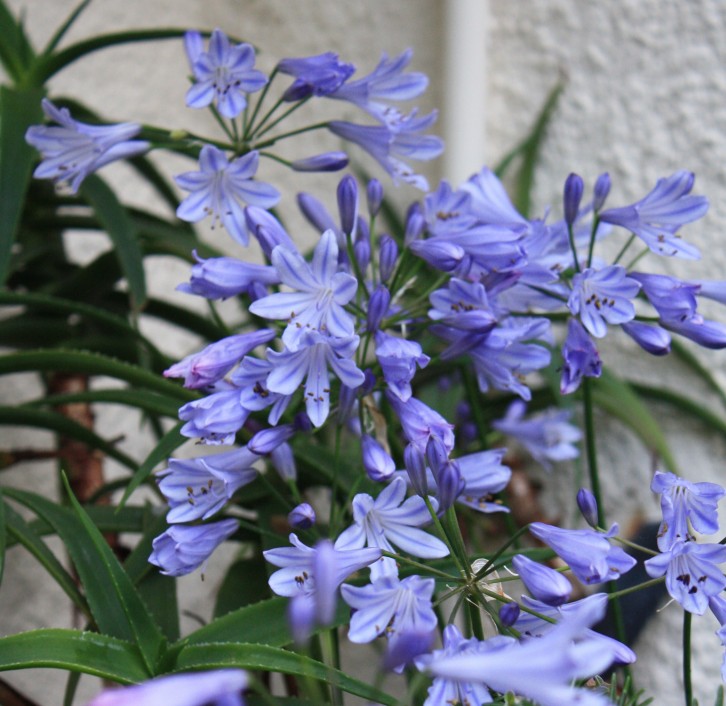 Agapanthus are now a firm favourite of mine and are always popular with visitors.  One day I’d love to expand my collection.  On my list are the “Midnight” series – varieties with particularly deep blue, almost plum coloured flowers.  My favourite is “Midnight Dream”, with drooping flowers the colour of ripe damsons.  It would combine beautifully with fiery oranges, fuchsia pinks or other purple flowers at this time of year.  One can dream!

Anyone interested in acquiring some Agapanthus plants in the UK should visit Pine Cottage Plants down in Devon, a specialist nursery.  They offer the darkest of all forms, Agapanthus inapertus pendulus  “Black Magic”, which has flowers of the darkest indigo blue.  Not far off are Agapanthus campanulatus “Indigo Dreams”, Agapanthus “Purple Emperor” and “Purple Fountain”.  All dark and dramatic and quite a statement in the border.

In pots or in beds, as single specimens or in large groups there is little to beat Agapanthus for colour, shape or reliability, provided you have the right conditions.  If they don’t flower it’s probably because they are in too much shade, have too much or too little root space, or have not been protected sufficiently through winter.  Over dividing can also reduce flowering.  All these issues can be remedied so, go on, give them a go and perhaps you can achieve a display like the one below!