It’s hard not to compare the relatively modest gardens created for Hampton Court with the blockbuster, famous name efforts at Chelsea. However, there’s no doubt that Hampton Court welcomes more adventurous ideas within categories such as Conceptual Gardens and Low Cost, High Impact Gardens. This year there was a real thread of resiliance and reconciliation running through many of the designs.  These gardens were perhaps a reflection on the hard economic times and a public show of determination not to give in to some of less pleasant influences on modern society.  The Celebration and Jubilation garden (above) simply celebrated the Diamond Jubilee, a theme which was thankfully not overexploited at the show.

I especially enjoyed some of the more unusual creations this year. A Riot of Colour, designed by Will Sandy, really stood out from the crowd.  A London taxi, vandalised telephone box and graffitied wall are all shown being reclaimed by nature. In an inspired twist, double yellow lines rise up from the tarmac to make a bench around a tree. The garden was meant as a reminder of the after effects of the 2011 riots which shocked everyone around the world. The props certainly stole the show, but both the designer’s sense of humour and the serious message came across loud and clear.

Preserving the Community, a garden by Anthea Guthrie and Nicole Burnett, was very charming indeed.  The simple planting of roses, annuals and vegetables was something everyone could relate to.  This was a reflection on communities and how they can work together to make the most of disused space.  Tables of produce like those at the front of this show garden can still be seen all over rural Kent, but would be a real surprise in urban areas. 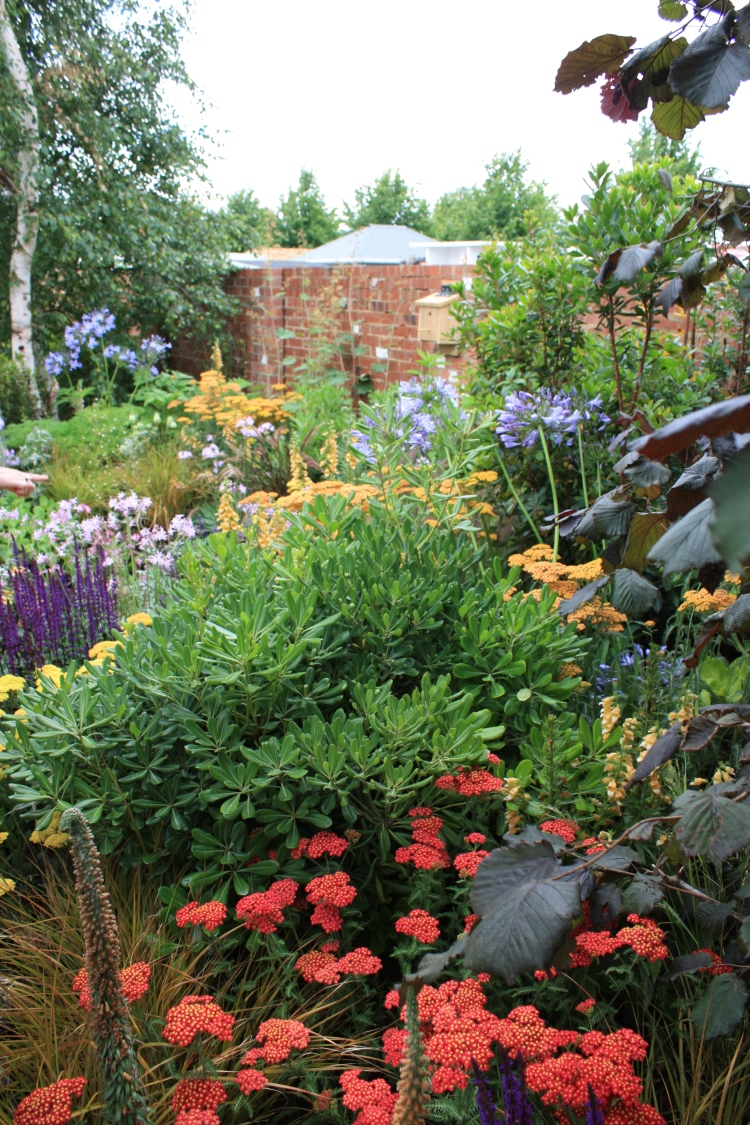 For the quality of planting design it was hard to beat Chris Beardshaw’s Urban Oasis.  The huge exhibit, created by the RHS and Groundwork (both charitable organisations), comprised eight very different urban spaces; some gardens, some public space.  This continued the community theme and added to the sense that many designers were seeking to encourage healing and hope through their designs.  The combination of orange, yellow, bronze, silver and blue was repeated in several other gardens, but was executed best here.  It’s always been a colour association I have loved, ever since planting apricot geraniums alongside powder blue Nemesia in my early teens.  Chris Beardshaw’s planting was, naturally, altogether more sophisticated, bringing together mellow yellow Digitalis “Spice Island”, fiery orange Achillea “Paprika”, deepest purple Corylus maxima “Purpurea” and delicate lilac Tulbaghia violacea.

Light at the End of the Tunnel, by Matthew Childs, won gold and best Conceptual Garden. Matthew was injured in the July 7 2005 bombings at Edgware Road station and his garden takes visitors on a journey from a dark, narrow, mossy tunnel to a lighter, brighter path, edged by a blizzard of Alchemilla mollis, Gaura lindheimeri “Chiffon” and Gypsophila paniculata “Bristol Fairy”. Understanding the meaning of this narrow garden made the experience all the more poignant. I hope that it future years these gardens are given a better setting, rather than appearing as if they landed in the middle of a field.  Although not to everyone’s taste conceptual gardens are important, especially for a nation so in love with its outdoor spaces.

Finally “Best in Show” went to Bridge Over Troubled Water, a tranquil and elegant garden designed by Anoushka Feiler. The garden comprised a rectangular black pool, the water swirling and descending into a forbidding whirlpool. This unusual feature symbolised the distress felt by sufferers of Overactive Bladder (OAB), the condition highlighted by this garden. The water was stradled by a wide bridge, fringed with ferns and planted over with delicate grasses, umbellifers and a line of Gleditsia triacanthos “Elegantissima”.  The naturalistic scheme included Pennisetum setaceum “Rubrum”, Sanguisorba officinalis “Arnhem” (aka great burnet) and good old Centranthus ruber (red valerian) which is currently adorning the cliffs near our home with its lipstick pink flowers.  On a cool breezy day, with the odd spot of rain breaking the inky surface of the water, the effect was both striking and thought provoking, just as the designer had intended.

If you want a sturdy, long-lasting, weatherproof tulip with a strong jawline then you won’t find many better that ‘Albert Heijn’. It’s looked nigh-on perfect for two weeks already, leaving others in its wake. Planted in well-drained ground, it’s one that comes back nicely the following year.
Our inaugural bulb field at the allotment is coming on a treat. This is where we are trialling 15 new varieties for the garden, as well as just wanting to create a damn cheerful display. Already in bloom are ‘Cash’ and what was sent as ‘Cape Cod’ (yellow, but should be yellow and red!). Those in between are various shades of yellow, red and plum/black. ‘Labrador’ and ‘Fire Wing’ are looking good, but most exciting of all is the variegated ‘Ravana’. What a cracker this looks to be!
Kingsgate Bay on the most glorious April afternoon.
Horrible day: cold and wet. The one consolation is that this will extend the display of spring bulbs well into May.
Narcissus ‘Jack Snipe’ AGM is a sturdy, reliable, petite daffodil which I find perfect for pots or growing in gravel. The colour is perfect for the Gin & Tonic garden where we’re focusing on ‘ice and lemon’ colours this spring 💛🤍
Garlic gradient / onion ombré
Loading Comments...
Comment
×
%d bloggers like this: