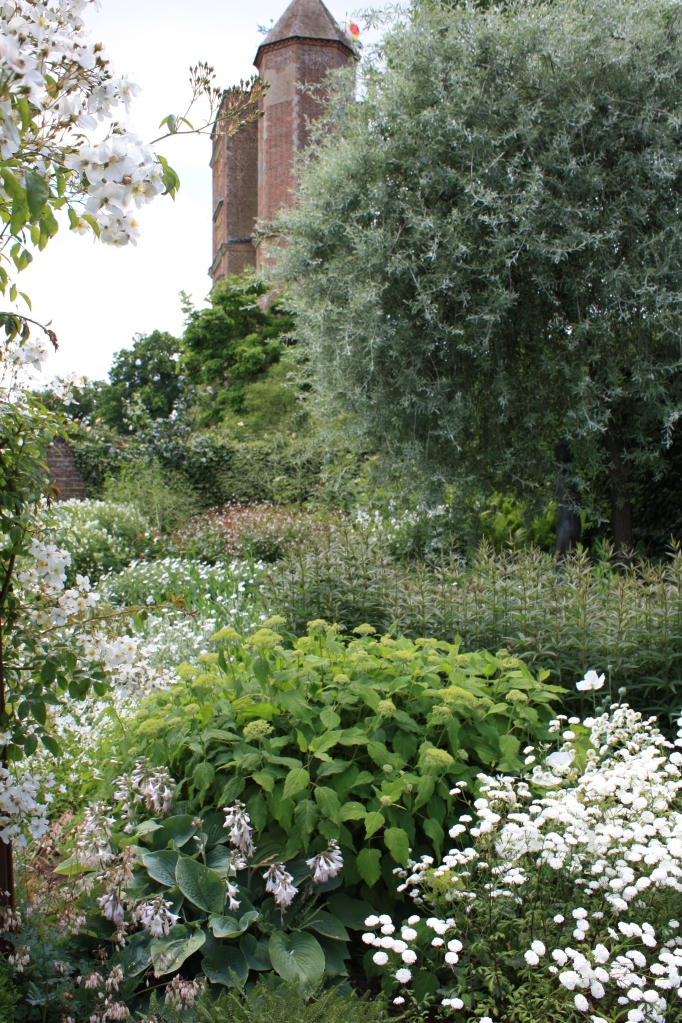 The White Garden at Sissinghurst is arguably one of the most admired and imitated gardens in the world.  It began as an idea in 1939, all thoughts of which were sadly overshadowed by the War.  Then in 1949 Vita resurrected her vision for a white and silver planting, including santolina, cineraria and rabbit’s ears, with regal lilies for height and drama.  Her husband Harold was keen that it became a garden which peaked in July, and so the process of planting and propagation began.  It was a very public creation, and Vita reported every detail of its development through her writing in the Observer newspaper and Country Life magazine.  By that time, Sissinghurst was already open to the public, and both were keen for it to look its best for the Festival of Britain in 1951.  This garden was frequently used for alfresco dinners, the bright white flowers glowing in the dusk.   It’s a romantic notion that was daring at the time.  Gentlefolk of Vita and Harold’s status were normally on holiday during July and August, and white was still regarded as the colour of death. 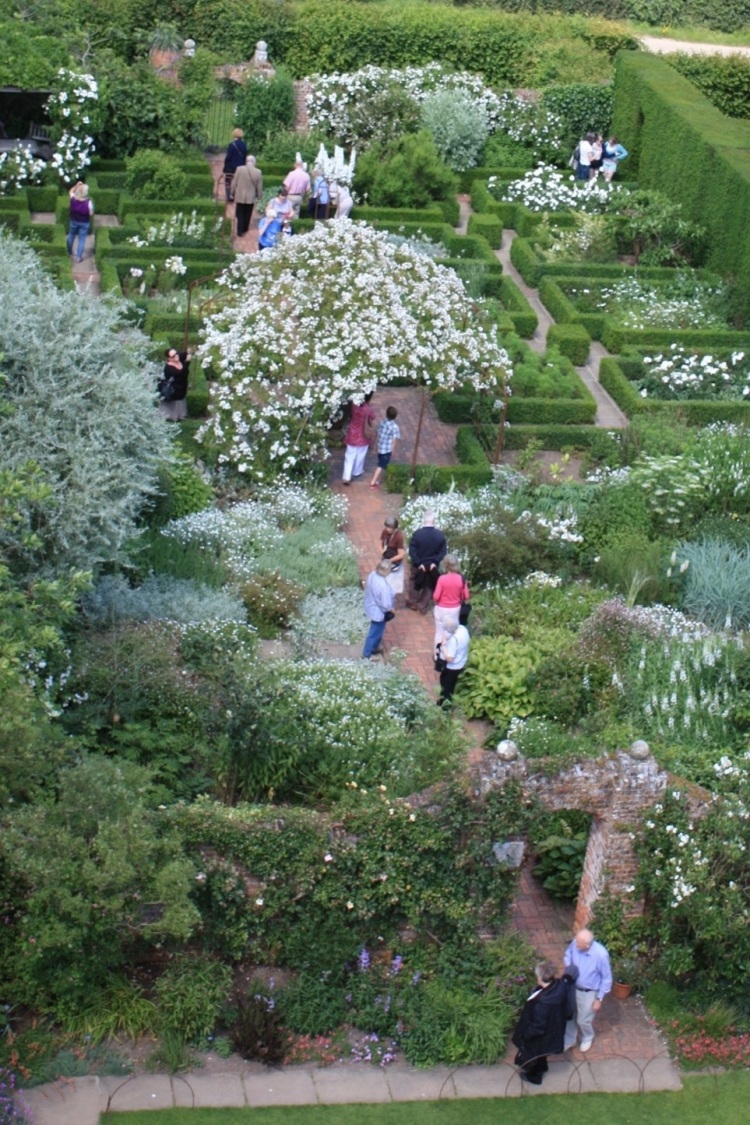 Today the White Garden is what everyone comes to see; packed with visitors, admiring the numerous boxed-edged borders overflowing with pristine flowers.  The arbour of Rosa mulliganii, centred on a Chinese Ming Dynasty vase planted with white Thunbergia, provides the centerpiece.   Offset, the statue of the Vestal Virgin refreshes itself beneath a waterfall of Pyrus salicifolia, the overall effect being peaceful and tranquil.  The photograph above is taken from the majestic tower, visible over the fields from many miles distant. 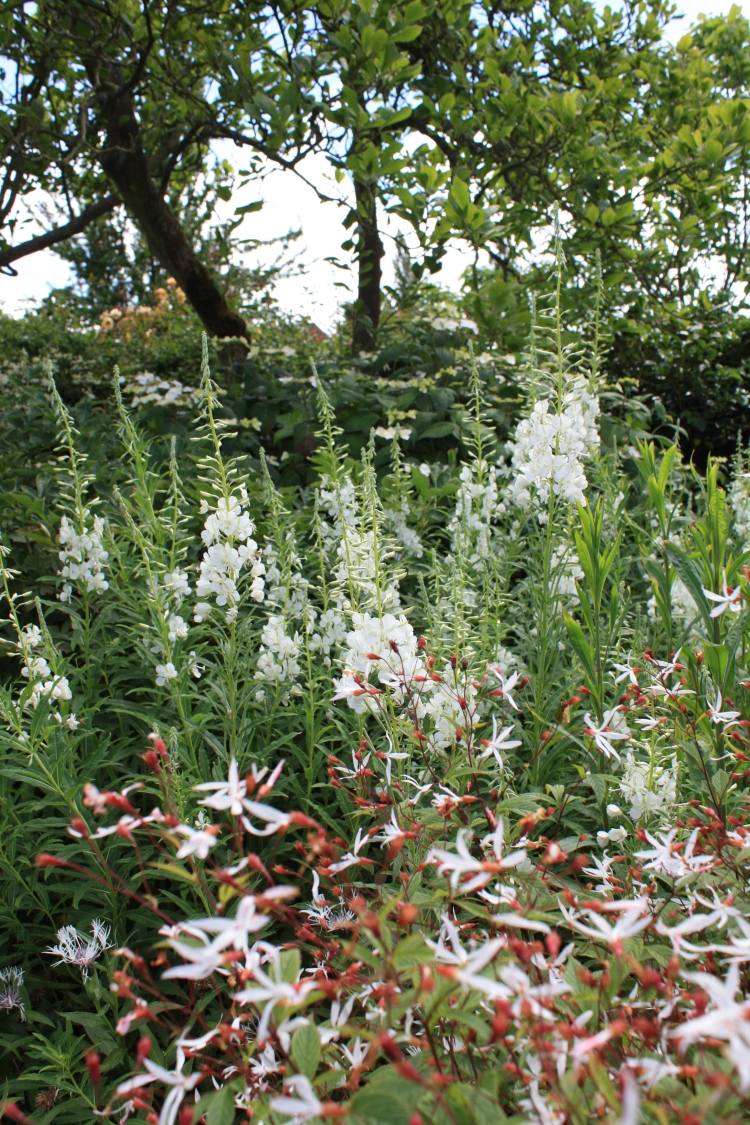 On our visit the white rosebay willowherb, Epilobium angustifolium f. album, was looking bright and fresh, swayed by a stiff summer breeze.  Gillenia trifoliata (Indian Physic) fluttered in front, like a host of glacial damselflies.  As pure and simple as can be.

Attracting a lot of attention from photographers was Eryngium giganteum, a favourite of Vita’s.  This biennial plant is also known as ‘Miss Willmott’s Ghost’ after the nineteenth-century gardener Ellen Willmott, who liked to secretly scatter seeds of the plant in other people’s gardens.   The name might also reference the plant’s ethereal appearance, with its prickly ruff of steely-grey bracts that shine a ghostly silver in the sun.  A friendly ghost, if ever there was one.

My weekend project was creating this crafty candle arrangement to celebrate the approach of Halloween. I used rustic candles, moss, glass pumpkin ornaments, gourds and ivy, with a few sprigs of old man's beard to mimic puffs of smoke - or spiders' webs. Copper wire lights add a finishing touch. Swipe across to see a time lapse of how I did it.
Chrysanthemum ‘Dixter Orange’ has been flowering continuously since late July. A thorough deadhead was required at the end August and now we’re enjoying a second flush of coppery-orange flowers.
I gave the Gin & Tonic Garden a bit of a spruce up yesterday. It’s now possible to move around out there again 👏
Chrysanthemum ‘E.H. Wilson’ is a wonderfully old variety. The original, wild-collected plant was probably introduced by plant hunter Ernest Wilson in around 1905. Primrose-yellow, scented flowers are produced in great profusion on fine, wiry stems. Quite the most lovely thing
The Beau with blooms.
It’s testament to how far chrysanthemums have fallen from grace that ‘Picasso’ should be considered endangered in cultivation.
Loading Comments...
%d bloggers like this: