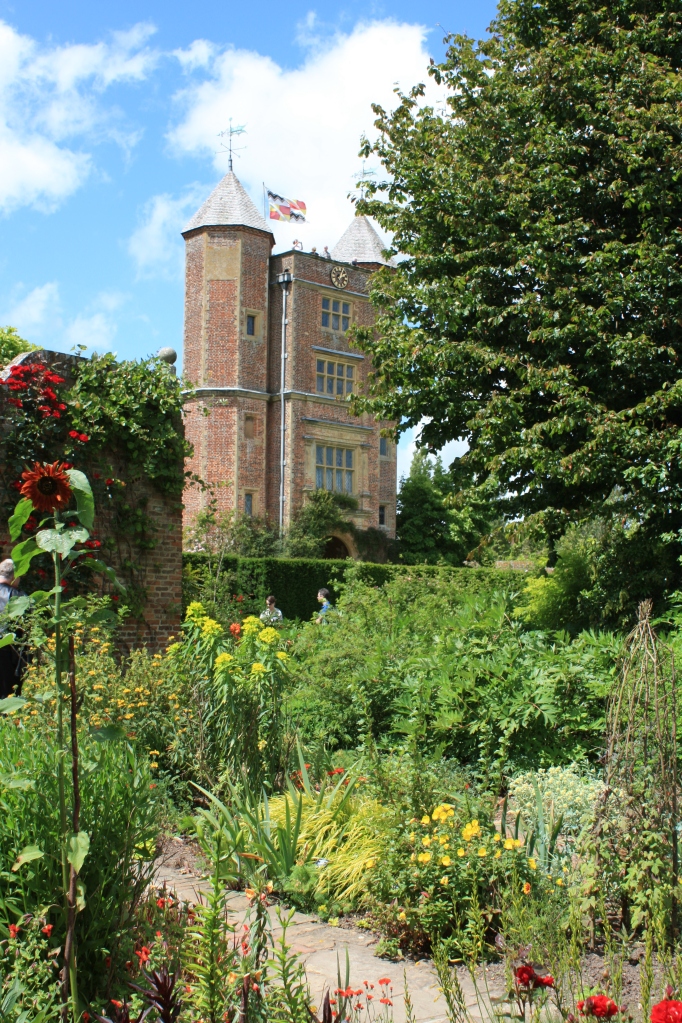 The gardens of Sissinghurst Castle in Kent must be amond the best known in England, if not the whole of Europe.  They are the creation of two people, Vita Sackville-West and her husband Harold Nicholson, who arrived at the property in 1930.  Over a period of 32 years they worked together on this gentle masterpiece, until Vita died in 1962.  Harold lived until 1968 and passed the garden to the National Trust for safekeeping.  Vita and Harold’s decendents still live in parts of the castle, which feels more like a collection of smaller buildings, the interconnecting parts having fallen into ruin long before Vita and Harold’s time.

Last weekend I had resolved to take my friend Joy there as I knew that much of the garden would be enjoying its peak, warmed by the sun after plenty of rain.   We were not disappointed.  This is a place so full of interest and incident that it’s impossible to be bored.  There’s something new to see around every corner, and even non-gardeners can’t fail to be seduced by the romantic setting.  Despite the significant number of visitors, the garden it never feels overcrowded, and there is always a spot to be found where you can sit down and reflect on what you’ve seen.  As there is so much to share here, I’ll use a few separate posts, each focussing on a different area.

One of the most fetching things about Sissinghurst is the way plants have been chosen to complement the warm red brick and weathered oak doors of the ancient castle.  There’s no better example of that than Macleya microcarpa ‘Kelway’s Coral Plume’, which is to be found in a border to the side of the South Cottage.  The delicate flower heads, like feather dusters, pick out the rosy colour of walls perfectly.  Various pink roses, including Rosa “Albertine”, are an equally good match, and fragrant too.    But for me, the most charming combination was that of Rosa “Mermaid”, with its huge primrose yellow flowers and glossy green leaves, against the backdrop of heavy oak planks (see above and below).

And then, at the door to the Priest’s House, I chanced upon one of a number of richly coloured Pelargoniums, which I believe could be a variety called “Lord Bute”.   These lovely specimens had reached a substantial size and must have been overwintered under glass for a few season, before being planted out into large terracotta urns. 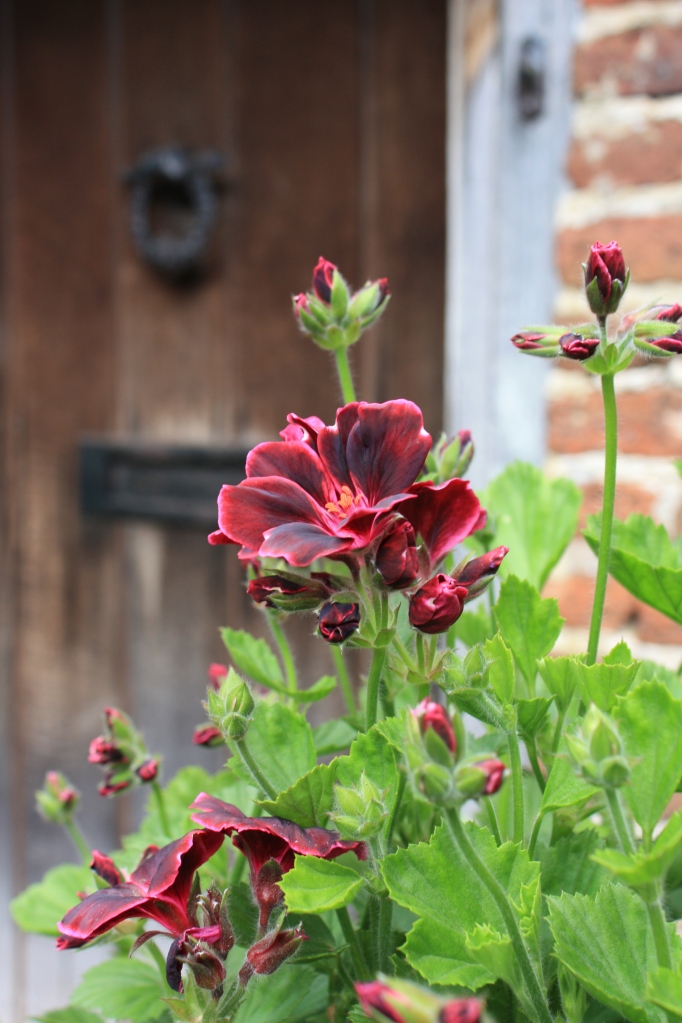 Beneath the windows of main range are a number of stone sinks, only just planted out with tender perennials.  (This makes me feel slightly better, as I am also just getting around to planting many things in their final positions.)   This lichen covered sink, filled with a wonderful Diascia, was especially lovely with the antique plum flowers and their pronounced “eye”.  Each planted with a single variety, these shallow containers will look really spectacular later in the summer when the flowers cascade over the edges.

I was also delighted to rediscover one of my favourite plants, reliably sheltering in the brickwork at the foot of main tower.  It is Convolvulus althaeoides ssp. tenuissimus, or narrow-leaved bindweed.  Quite a name for such a diminutive plant, but a prettier and more delicate thing it’s hard to imagine.  I have never seen it anywhere other than at Sissinghurst or for sale anywhere, so if anyone knows where to find it, please let me know! 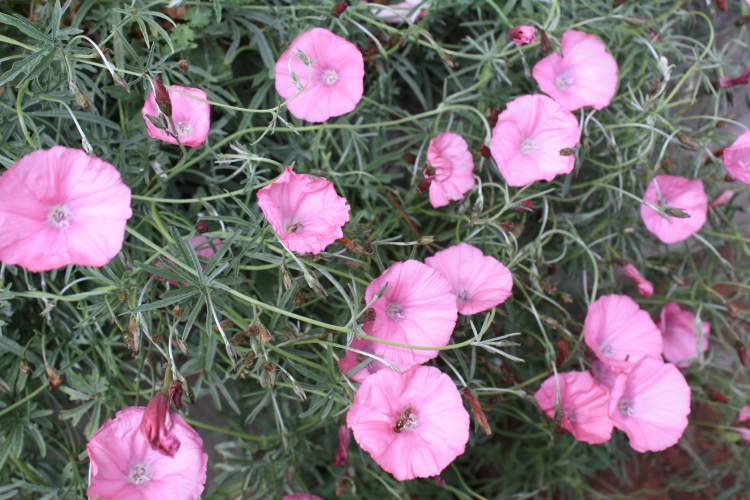 And then, that key feature of the rose garden, the huge curved wall, clothed in vigorous climbers.   Clematis “Perle d’Azur” was just bursting into a profusion of beautiful lilac-blue flowers, each with either 4 or 6 petals.  Why does that happen I wonder?  The wall provides a backdrop to a splendid wave-backed seat designed by Sir Edwin Lutyens,  my greatest inspiration when it comes to garden design.  I wish I could grow clematis as well and this and afford them the space to reach such heady heights.

More to follow soon, including the incomparable white garden.

Meanwhile back at home, where the horticulture is slightly less highbrow, I have planted out half my new purchases.  It’s been a day of sunshine and sharp showers – the kind that seem to get you very wet, but make no difference to the garden – so perfect for guilt free blogging!