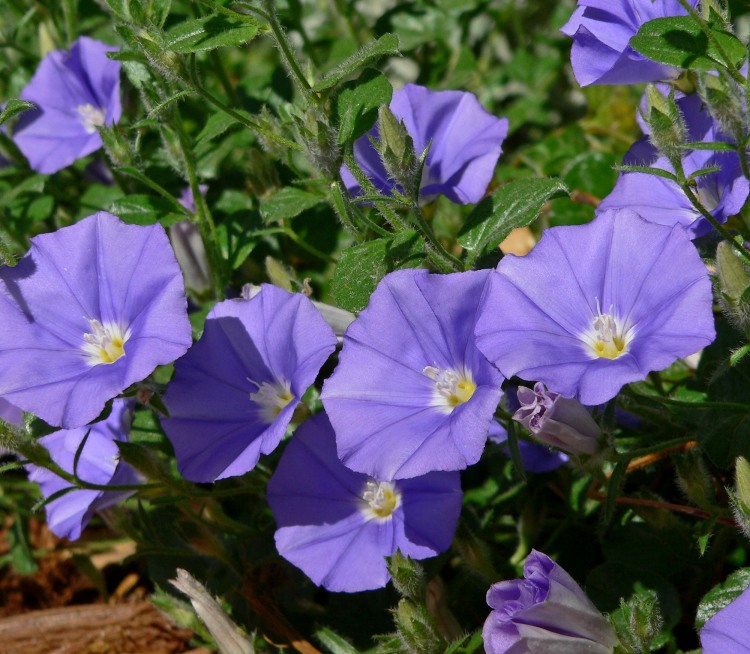 This little gem of a plant is Convolvulus sabatius, otherwise known as Blue Rock Bindweed.  Unlike its invasive, white-flowered cousin it does not spread like wildfire and make itself generally unwelcome.  Instead, it cascades delicately over the slate walls of our raised borders and blesses us with small, soft blue flowers all through the summer.  It appreciates a bit of warmth, and the flowers close up in the shade and at night.   Many people choose to use it as a hanging basket plant as it can be killed by frost.  In our sheltered seaside garden it has come through several winters unscathed and bulks up nicely through May, ready to put on a good display from June onwards.  By the end of the summer it will have reached the ground and we’ll be enjoying a curtain of trumpet-shaped flowers.  Now is the time to take some softwood cuttings, so I’ll have some spares to plant out later in the year.

I’m greeted by this intricate tapestry of foliage every morning in my garden room /
If you want a sturdy, long-lasting, weatherproof tulip with a strong jawline then you won’t find many better that ‘Albert Heijn’. It’s looked nigh-on perfect for two weeks already, leaving others in its wake. Planted in well-drained ground, it’s one that comes back nicely the following year.
Our inaugural bulb field at the allotment is coming on a treat. This is where we are trialling 15 new varieties for the garden, as well as just wanting to create a damn cheerful display. Already in bloom are ‘Cash’ and what was sent as ‘Cape Cod’ (yellow, but should be yellow and red!). Those in between are various shades of yellow, red and plum/black. ‘Labrador’ and ‘Fire Wing’ are looking good, but most exciting of all is the variegated ‘Ravana’. What a cracker this looks to be!
Kingsgate Bay on the most glorious April afternoon.
Horrible day: cold and wet. The one consolation is that this will extend the display of spring bulbs well into May.
Narcissus ‘Jack Snipe’ AGM is a sturdy, reliable, petite daffodil which I find perfect for pots or growing in gravel. The colour is perfect for the Gin & Tonic garden where we’re focusing on ‘ice and lemon’ colours this spring 💛🤍
Loading Comments...
Comment
×
%d bloggers like this: