“Cymbalaria ….. runneth and spreadeth on the ground and clymeth and hangeth on walls even as Ivie or Chickweed doth, the branches are verie small, round and smooth, limmer and pliant.”

I’ve been up north this weekend, sampling the delights of Beverley in the East Riding of Yorkshire. What a fine town Beverley is, blessed with a long and fascinating history, handsome architecture, friendly people and ample good shops. I booked my train ticket months ago, before detailed arrangements had been made, and so I find myself killing time in a coffee shop before my train departs for Hull, and thence to London’s King’s Cross. My suitcase weighs a tonne as a consequence of having purchased a dozen plant books in various charity and second-hand shops, hence I can’t move very far or very fast.

Approaching Beverley station by way of Friar’s Lane I passed a brick wall festooned with one of my favourite wild flowers, the ivy-leaved toadflax (Cymbalaria muralis). This diminutive plant grows in my walls at home, forming a delicate veil of foliage embroidered with tiny lilac flowers from April until October. During mild winters flowering may be continuous, with each bloom resembling a Lilliputian snapdragon. The effect is magical, as if the plant rightly belonged to a miniature world where fairies employed it to hide their tiny front doors from prying eyes.

It is thought that ivy-leaved toadflax arrived in England as a stowaway in a consignment of marble sculptures being transported from Italy to Oxford, perhaps explaining the alternative common names ‘coliseum ivy’, ‘Oxford ivy’ and ‘Oxford weed’. Another story has it that seedlings snuck out of the Chelsea Physic Garden at some point in the 17th Century. Either way, this Southern Europe invader found British weather to its liking and quickly colonised the walls of stately homes and cottage gardens, paying no heed to social barriers.

Despite the plant’s most common name – and it has been anointed with more than a few – the foliage of ivy-leaved toadflax is more maple-like than ivy-shaped to my mind. Meanwhile the Latin name Cymbalaria alludes to the leaves resembling cymbals. Again, quite a stretch of the imagination needed to make that link. What’s for sure is that each apple-green leaf has five rounded lobes, a waxy texture and a fine edge of burgundy-red. The sprawling stems, which can grow to a length of three feet, are also reddish in colour. They possess a special quality which allows the plant to spread and regenerate rapidly. Initially flowering stems are positively phototropic, meaning they move towards the light, but once successfully pollinated they become negatively phototropic. The stems change tack and seek darkness, in doing so pushing fresh seed into a new nook or cranny where it is more likely to gain a foot-hold. It’s a clever piece of plant engineering. As a result it’s not uncommon to find walls completely shrouded in ivy-leaved toadflax. In the garden this is not a problem as any unwanted foliage can quickly be torn away. I let it do its own thing until it becomes too shaggy and then I remove the excess and let it start again. 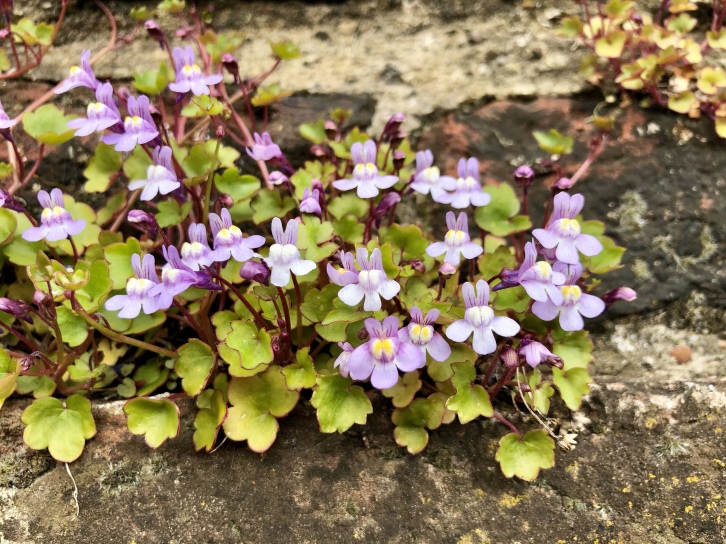 Each flower is a tiny marvel. Three pronounced lobes are proudly presented beneath a lemon-yellow cleft: in bright sunlight this part may fade to white. Above the cleft two further lobes stick up like a rabbit’s ears, each one finely streaked with purple. A small spur at the back of the flower is a much deeper violet. The flowers are pollinated by bees, some of which nest in walls, so from that point of view it is a useful food source and valuable addition to any wildlife-friendly garden. Less helpfully the dense stems form an invisibility cloak for snails. If you look beneath them you will often find tens of the blighters poised and ready to create havoc after dark.

Ivy-leaved toadflax is not a British native but has been so widely naturalised in the UK for so long as to be an honorary member of our limited flora. If you have walls, ivy-leaved toadflax will generally find you in time, but, should you need an introduction, seeds can be purchased from Chiltern Seeds and other reputable sources. Plant in sun and ivy-leaved toadflax will remain reasonably compact and floriferous; plant in the shade and it will venture further. After that it will continue to arrange itself artfully year after year, rewarding you with a cheery curtain of minuscule flowers from spring until autumn. TFG. 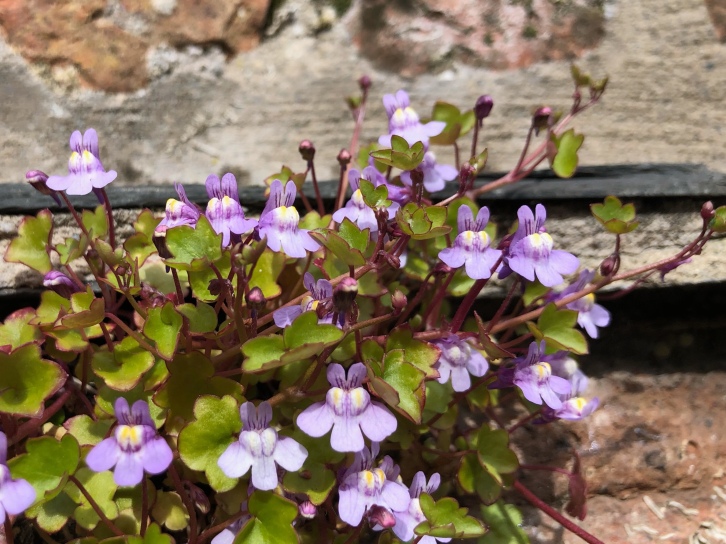 The first of our seed-grown nasturtiums is flowering. Nasturtium ‘Black Velvet’ is not so much black as opera house red, but it’s certainly velvety and gorgeous to look at. Will look even nicer on my salad 🥗 #nasturtiumblackvelvet #onourallotment #nasturtium #edibleflowers #grownfromseed #redflowers #allotmentyear1
Looking out of the library window through a haze of pinks and whites. #theginandtonicgarden #inmygarden #thewatchhouse #aeoniumzwartkop #geraniummaderense #anisondontea #smallgarden #courtyardgarden #paintedfence #slattedfence #roomwithaview
Watering time. #mygreenhouse #inmygarden #thewatchhouse #greenhouse #olivetree #cryptomeriajaponica #senecioangelwings #acaciaverticillatariverineform
It was a scorching Bank Holiday Monday on the allotment. As we are approaching the end of the month we felt confident enough to plant out most of our dahlias (there will be over fifty cultivars once the smaller ones have caught up) and forty tomato plants. Heaven only knows what we are going to do with all the fruit but I am looking forward to picking vast quantities of flowers for the house this summer. Satisfying, if not very hot work! #happydays #onourallotment #allotmentlife #growyourown #plantingout #fruitandveg #dahliafanatic #kitchengarden #cutflowergarden
Peonies from The Beau 💗 #peonies #inmydiningroom #cutflowers #springflowers #heartsdelight #everydayisaflowerday
Tomorrow we’ll be planting out our dahlias - over fifty different cultivars - most of them up at the allotment, with the cream of the crop reserved for the garden. If we are feeling bright and breezy we might even make a little video to map their journey from our garden table to their new homes. #plantingdahlias #inmygarden #onmyallotment #gardening #dahliaakita #dahliafirepot #dahlianicholas #dahlialoveofmylife #tubers
%d bloggers like this: