At the end of the summer I often buy plants to plug gaps in the garden, with no expectation that they will flower for more than six to eight weeks. They are simply there to do a job, and keep the display going through autumn, until cold weather arrives. So it was that I ended up with a tall pot planted with three myrtle-leaf milkworts, their purple flowers clashing with everything else I was growing. The last time I grew this plant was at least fifteen years ago when I was living in Reading, where I had a tiny garden backing onto a cemetery. I recall considering this cheerful little shrub terribly exotic and unusual, so I was pleased to rediscover it in my local garden centre.

Polygala myrtifolia occurs naturally from the Bokkeveld Mountains, near Clanwilliam in South Africa’s Western Cape, to Kwazulu-Natal. In its natural habitat it is a fast-growing pioneer of forest margins, sand dunes, rocky coasts and open grasslands, adapting its stature and shape to suit the environment it finds itself in. Polygala myrtifolia forms part of the fynbos ecosystem, which has some climatic similarity to the Mediterranean, which means mild, wet winters followed by hot, dry summers. Growing to a maximum height of between two and four metres, depending on situation, Polygala myrtifolia can quickly make a large shrub or small tree.

The arching stems of Polygala myrtifolia are lined with small, waxy, grey-green leaves which resemble those of myrtle, hence ‘myrtifolia‘. (Polygala is an old Greek name derived from the words polys, meaning much, and gala, meaning milk. This is because some members of the milkwort genus have a reputation for promoting the secretion of milk in cows.) Each branch is terminated by a cluster of bright, purplish-pink flowers which resemble those of a legume at first, but are actually rather different. Instead of the pronounced ‘banner’ petal at the back of the flower (think sweet-peas), they have an extravagantly fringed, brush-like keel at the front. The petals can be pink, magenta, purple or white. My plants were flowering when I purchased them in September and have not stopped since: the photograph below was taken on the first weekend in January. Polygala myrtifolia is not phased by the salt and sand-laden gales we’ve experienced this winter (unlike my camera skills), and together with Bulbine frutescens and yellow argyranthemums is bravely spinning the essence of summer through the darkest days of winter. It would make a very nice feature plant in a dry, gravel garden, or casual edging to a raised bed, and is perfectly happy in a pot.

Polygala myrtifolia is an easy, accommodating plant for a mild, coastal garden, but probably needs winter protection in a cold or cool greenhouse elsewhere. It is happy growing in most soil types, provided they are well-drained, and likes full sun or lightly-dappled shade. Once established, plants are drought tolerant and, best of all, common pests seem completely disinterested. Untidy plants can be pruned if they become too lax, and, if you want more, they are readily propagated from seed or stem cuttings. All-in-all, a pleasing garden plant whether you’re looking for a permanent specimen or something fabulous to fill a gap when everything else is looking tired. TFG. 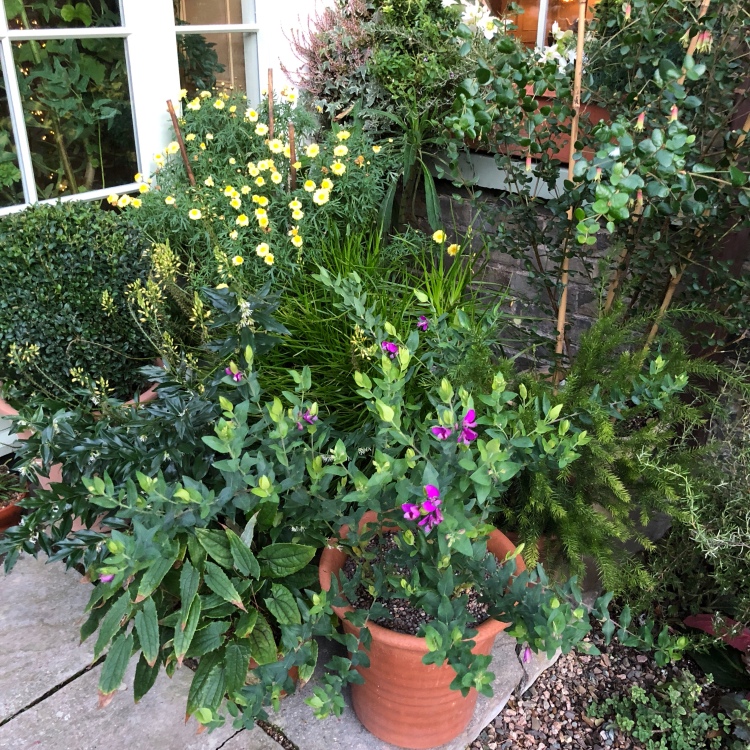 Leave a Reply to The Frustrated Gardener Cancel reply