If I were to win the lottery, The Salutation is the house I’d want to live in. I’d spend every spring and summer there, before overwintering in Capri, or the Caribbean; I can’t decide which. It’s probably not a choice I’ll ever be called on to make, but I like to think about it nevertheless.

Our first visit to The Salutation each spring is one I always look forward to; foremost because it’s an opportunity to admire the garden’s fine structure before it becomes shrouded in foliage and flowers. Whilst Edwin Lutyens would surely recognise today’s layout as his own, The Salutation is an unusual combination of informal features, such as Lake Patricia and the Woodland Garden, and the elegant formality for which the architect is famed. Packed into three acres on the edge of Sandwich, every inch of the garden is on show, which must be quite a challenge for the gardening team lead by Head Gardener Steve Edney. 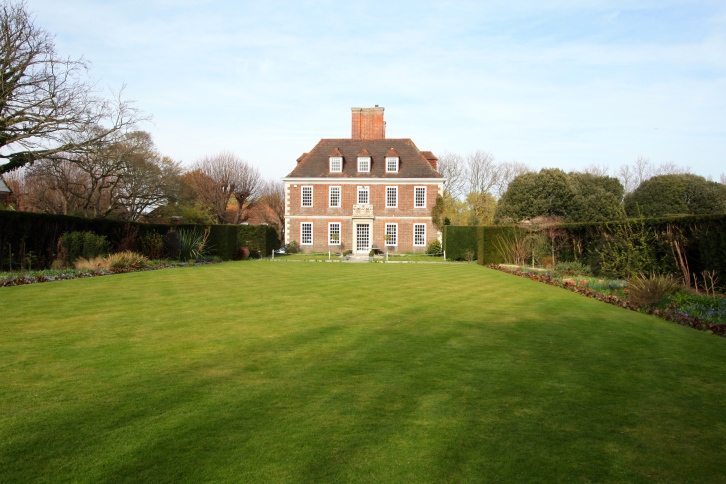 The Salutation from the Bowling Green

Over winter there have been some minor changes to the layout; the removal of some hedges; the creation of a new area just off the long border, which I suspect might be an extension of the tropical garden; and a major overhaul of the space surrounding the potting sheds and greenhouses. Everything was looking particularly spick and span when we visited last weekend to renew our season tickets and get some fresh air.

The Salutation’s tulips and hyacinths are way ahead of my own, basking on the warm, dry, south-facing bank that skirts the long border. The scent of hyacinths was intoxicating, and the hum of red-tailed bumble bees so loud it was almost deafening. Accompanying the bees with their coarse calls were innumerable seagulls, a reminder that the English Channel is not far away. In December 2013 the briny came too close for comfort when it flooded a significant part of the garden, including the Long Border. Four years later, apart from the unevenness of the path, one would never know the garden had been inundated with salty water.

Within moments Him Indoors had taken to a garden bench to consult his phone, which these days appears to be superglued to his hands. It seems gardens are no distraction from the allure of Facebook. Behind him in this picture are several clumped banana plants, still carefully wrapped in fleece and hessian lest they experience a late, damaging frost.

Him Indoors and Mummified banana plants. Can you tell which is which?

Having taken the obligatory shot of the Queen Anne inspired facade from the end of the double borders, and not a good one I’m sorry to say, I ventured into the Woodland Garden.

The Salutation from the garden’s Eastern boundary

Since the great flood, the Woodland Garden had been left to its own devices, becoming slightly down at heel. Over winter the garden’s winding paths have been spruced up. There are new vistas into the rest of the garden and evidence of new planting.

One end of the woodland walk ……

Every year I marvel at the quantity of blue and white Anemone blanda that flood out of the Woodland Garden onto the lawn, surging like a floral tide towards the perennial borders.

At the Holm Oak Walk one is reminded exactly who designed this handsome garden. The immaculately clipped evergreen columns, their simple underplanting of roses and lavender, the mighty oak gate in the garden wall, presided over by an exaggerated key stone, are all Lutyens’ signatures. When either side of the Holm Oak Walk the gardens are frothing and fizzing, this stately axis remains calm and quiet. 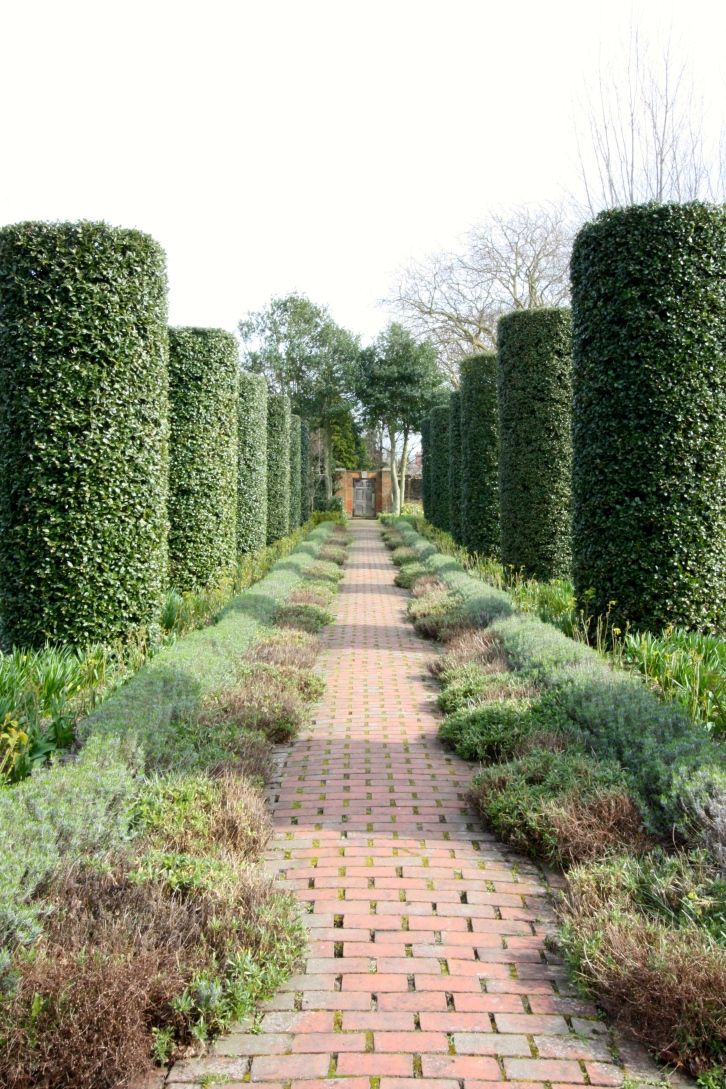 I never seem to hit the White Garden at quite the right moment. As much as I like the concept of single colour gardens, this one doesn’t do a lot for me. The layout is clever, with deep, box-edged borders and narrow paths, but even the addition of plants with black foliage doesn’t lift the slightly melancholy air. A tall specimen of Daphne bholua ‘Peter Smithers’ provides delicious scent on the way out. 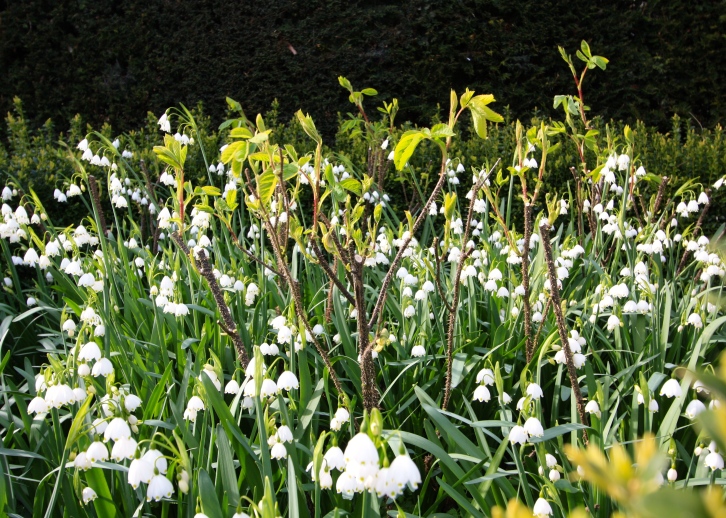 Leucojum and rugosa rose shoots in the White Garden

I would much rather be on the close-mown bowling green, where the borders to either side are stuffed with an artful mix of foliage and flowers sharing similar reddish tones. At this time of year there is less to see, but an edging of Bergenia cordifolia ‘Winterglut’ provides both burgundy foliage and waxy, magenta-pink flowers in spring. I spotted a couple of rogue Muscari macrocarpum ‘Golden Fragrance’ in one patch, a bulb I have tried and failed to grow, but which is lovely enough for me to try again. 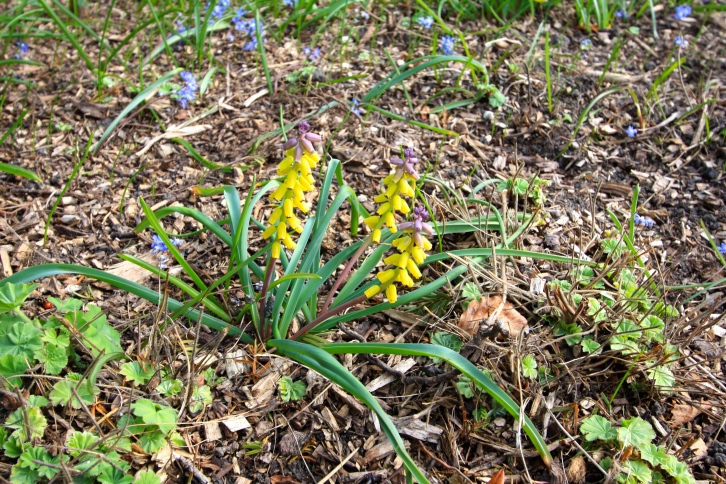 The Yellow Garden, at the end of the circuit, is crowned with a circlet of narcissi in spring. More hyacinths have been added, which is as good for the bees as it is for visitors. This is a lovely idea that anyone with a lawn might replicate: and it relieves one of the obligation to cut the grass until all the bulb foliage has died right down.

The Yellow Garden and Knightrider House

The clock ticking on the car park we were in and out of the garden within an hour, but not without acquiring a pot of Moroccan spearmint (Mentha spicata) and a single stick of Clerodendrum bungei, a plant I have hankered after for years. It’s a shrub that throws up suckers hither and thither, but with large corymbs of pink blossom in late summer it is worth any hassle.

Ten years after opening to the public following extensive restoration, The Salutation is hosting a series of masterclasses, courses and tours throughout 2017. Click here for more details. 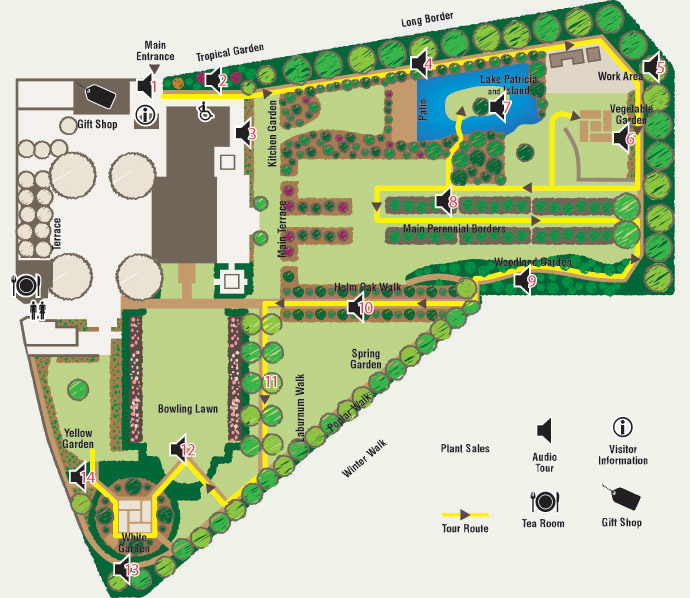 Just a few coleus in the greenhouse! Among others we have Solenostemon ‘Habanero’, ‘Spiced Curry’, ‘Henna’, ‘Gay’s Delight’, ‘Flirtin’ Skirts’, ‘Combat’, ‘Wisley Tapestry’, ‘Pink Chaos’ and ‘Burgundy Wedding Train’. Quite soon they’ll be planted out in terracotta pots and used to line the path to the front door. #coleus #solenostemon #inmygarden #thewatchhouse #coleushenna #coleusgaysdelight #coleushabanero #coleuspinkchaos #inmygreenhouse #plantbabies #plantlust #plantcollector
Powder puff perfection. #sparmanniaafricanaflorepleno #inmygarden #thewatchhouse #tendershrubs #foliageplants #bigleaves #furryleaves #pompomflowers #unusualplants #architecturalplants
Last night I noticed that my Isoplexis sceptrum (giant Madeira foxglove) is producing not one but ten flower spikes this year. This tender, endangered shrub or small tree from Madeira has grown outside for ten years and has slowly increased in size. It’s not a common plant so I am especially proud of growing it. When the flowers open the plant will look like a very exotic candelabra. The flowers were originally pollinated by sunbirds (now extinct) and produce copious amounts of sweet nectar. The house sparrows do not let this go unnoticed! More updates over the coming weeks. Meanwhile I have planted a second Isoplexis sceptrum purchased recently from Treseders in Cornwall. The first came from Hardy Exotics. Both nurseries can be relied upon for good plants. #isoplexissceptrum #inmygarden #thewatchhouse #plantsofmadeira #flowersofmadeira #unusualplants #tenderplants #hardyexotics #foliageplant #floweringplant #giantfoxglove #digitalissceptrum #plantaholic #plantcollector #boldfoliage #architecturalplants
The first of our seed-grown nasturtiums is flowering. Nasturtium ‘Black Velvet’ is not so much black as opera house red, but it’s certainly velvety and gorgeous to look at. Will look even nicer on my salad 🥗 #nasturtiumblackvelvet #onourallotment #nasturtium #edibleflowers #grownfromseed #redflowers #allotmentyear1
Looking out of the library window through a haze of pinks and whites. #theginandtonicgarden #inmygarden #thewatchhouse #aeoniumzwartkop #geraniummaderense #anisondontea #smallgarden #courtyardgarden #paintedfence #slattedfence #roomwithaview
Watering time. #mygreenhouse #inmygarden #thewatchhouse #greenhouse #olivetree #cryptomeriajaponica #senecioangelwings #acaciaverticillatariverineform
%d bloggers like this: