Altogether tamer, docile in fact, is blue rock bindweed, Convolvulus sabatius (also known as C. mauritanicus). An extremely polite customer, this small, scrambling plant stays in one place, flooding the ground around it with pools of delicately creased blue flowers. They start to unfurl at the end of May and often persist until November. I have grown Convolvulus sabatius in our coastal garden for many years now, giving each plant a haircut in autumn and then again in April. The trailing stems, cascading down our slate walls, tend to get tossed about like a bad comb-over during winter, so a trim keeps the plants tidy. 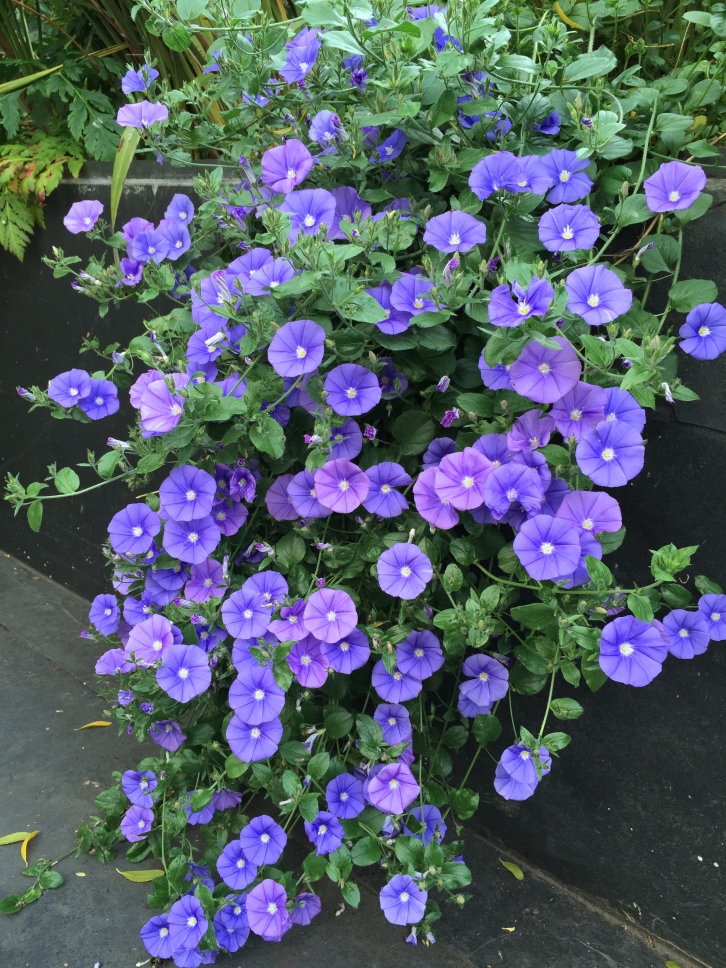 In the UK Convolvulus sabatius is commonly sold as a annual for hanging baskets and containers. This is often the cheapest way to obtain plants, but in the south of England you will find them perfectly hardy and reliable as perennials. Blue rock bindweed does not wander or set seed, simply making a stronger clump year after year. For best results plant somewhere that enjoys sunshine for at least half the day. Positioning at the top of a wall or slope gives the trailing stems a chance to show themselves off. Once established Convolvulus sabatius needs almost no maintenance and is very drought tolerant. If it does outgrow its allotted space then I give it a haircut and new shoots quickly appear – in a good season I might do this a couple of times. The flowers close in the evening and when they’re over they roll themselves up into tight twists like little Rizla papers before dropping. Their colour is an exceptionally pretty mauvish-blue, which works well with hotter pinks and yellows.

With its lens-shutter flowers and good manners Convolvulus sabatius is a bindweed I could never banish to the fringes of my garden. 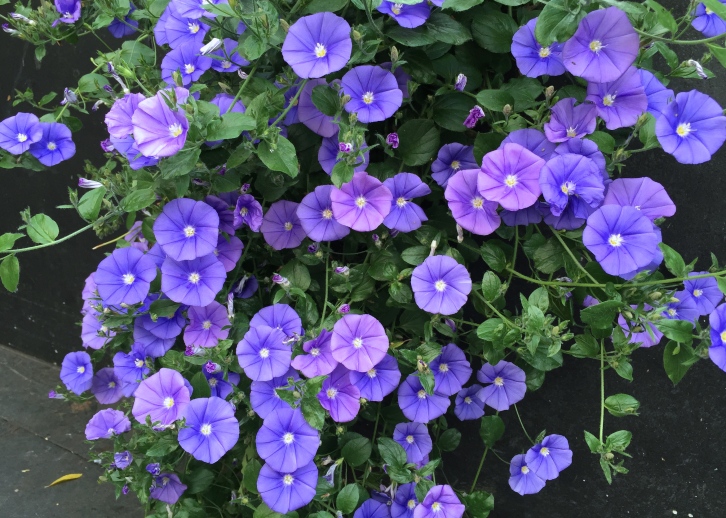 Captions please ..... #maximilliansydneybruiser #mildredhermioneoprah #bythefire #inmylibrary #roaringfire #pamperedpooches #jackhuahua #patterjack #furbabies
Today was a library day. #rainyday #thewatchhouse #roaringfire #bookcollector #interiordesign #chandelier #periodhome #library #prideandjoy #homesweethome
A home isn’t a home without plants. Here are a few ways I use houseplants at The Watch House. Carefully chosen, there’s a plant for almost every situation (apart from the cupboard under the stairs!). More in my latest blog post at The Frustrated Gardener | link in bio. #inmyhome #thewatchhouse #houseplants #greenroom #potplants #foliageplants #greeninterior #windowsillplants #dieffenbachiareflector #gardenroom #cacti #succulents #opuntia
‘I want to be alone’. Maximillian Sydney Bruiser plays it cool this Valentine’s Day. He loves me really. #maximilliansydneybruiser #thewatchhouse #cutepooch #jackhuahua #andpose #dogsofinstagram
The ‘Snow Moon’ rising over Broadstairs harbour last night. Fat chance of seeing anything through the driving rain tonight ☔️ #snowmoon #broadstairs #harbour #moonrise #thanetlife #clifftopview #stormciara #twilight
The calm before the storm. Everything was either tucked away or staked up yesterday, before Ciara arrived. Each of those pots is packed with spring bulbs; mainly tulips and narcissi. They’ll be safe and soundly below ground. #stormciara #inmygarden #thewatchhouse #greengarden #wintergarden #patio #terrace #courtyardgarden #geraniummaderense #beschorneriayuccoides
%d bloggers like this: