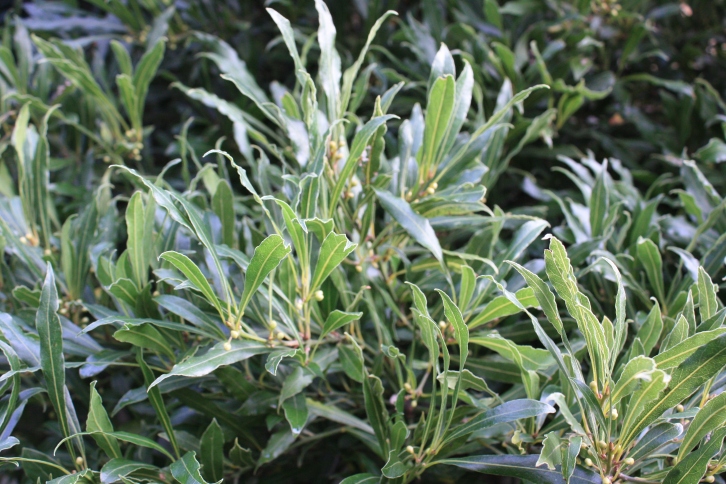 It’s in the depths of winter, when the wind roars in from the east, that I’m reminded of the value of good evergreen trees and shrubs. They provide shelter from the gales (and for the birds) as well as providing precious structure and attractive glossy foliage throughout the year. Yet many gardeners don’t venture far beyond the traditional choices of box, holly, yew, laurel, Eleagnus and holm oak.  I’d have fallen into the same category a few years ago, before I was introduced to a quartet of really exceptional evergreens.  These would more than earn their keep in any garden, but are especially robust for coastal sites.

First on my list of recommendations is Laurus nobilis ‘Angustifolia’, the narrow-leaved bay, pictured above.  This is the Darcey Bussell of the group, an elegant tree with a fine, willow-like appearance.  Compared to normal bay, the leaves are narrower, longer and a fresher green.  The leaves can be used in cooking although the berries, which look remarkably like black olives, cannot be eaten.  Unfortunately the tree does not grow true from seed; I’ve tried it and ended up with lots of bog-standard bays, so it needs to be purchased from a specialist nursery.  Narrow-leaved bay will grow to about 4m.  Ours, after 6 years, must be about 2.5m tall and forms a neat, tidy cone without any trimming.  If it is clipped or trained into a standard it can form a really attractive, tight shape.

The only problems we’ve had are with scale insects, which look like small bran-flakes with cotton wool around the edge.  These unpleasant bugs can cause the foliage to distort, so need to be removed with warm soapy water as soon as possible. 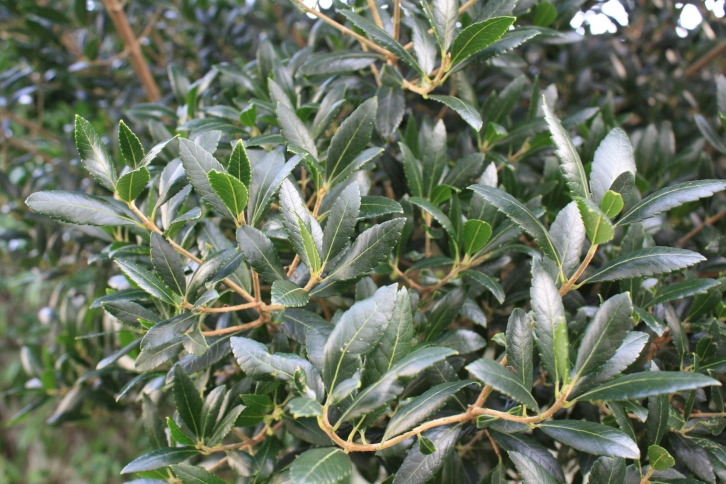 Next up is Phillyrea latifolia, the green olive. This is a superb little tree, compact and naturally voluptuous – the Nigella Lawson of the group.  It’s no wonder it’s popular in Japanese style gardens, where it can be clipped to exaggerate the cloud-like outline of the tree.  Like the narrow-leaved bay, Phillyrea is very drought tolerant once established and tolerant of salty gales, so ideal for seaside gardens like ours.  It was at its most popular back in the 1900’s, when it was often planted as a specimen in churchyards.  Ours is starting to get a little larger than I’d like, blocking out the early morning sun across the English Channel, but I don’t have the heart to give it the chop.  The leaves are so dark they can almost appear black against a dazzling blue summer sky. 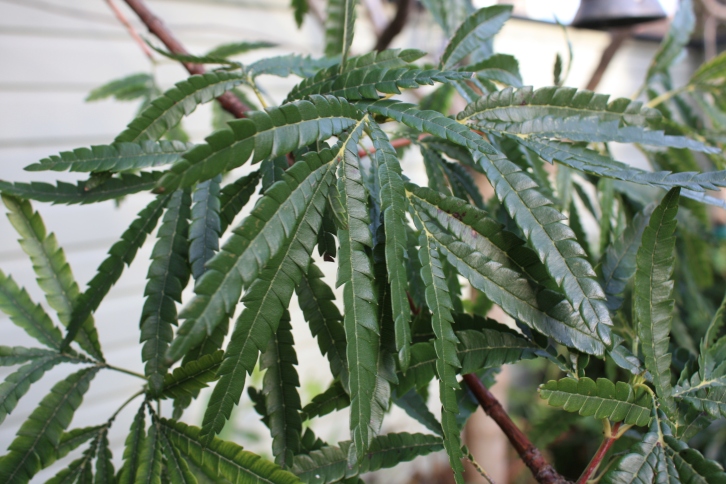 In a different league altogether is the preposterously named Lyonothamnus floribundus asplenifolius.  A botanist somewhere was having a laugh, or a drink, when he came up with that one.  The Santa Cruz ironwood, as it’s more commonly known, is a reasonably fast growing, slender tree, from the coastal areas of California.  After six years it’s approaching 15ft tall, but the canopy is no more than 6ft across.  The pretty, fern-like foliage is only surpassed by the beautiful cinnamon-coloured bark, which peels off  in perforated strips throughout the year.   If left on the trunk it can start to resemble a very shaggy Red Setter.  If we ever had a hot summer, we could expect the leaves to exude a pleasant marshmallow fragrance and even look forward to some flowers. 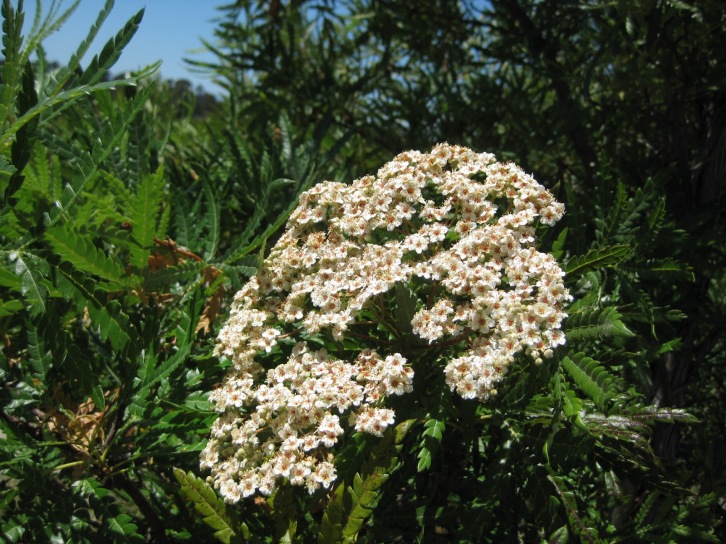 The flowers have the looks of an Achillea or Spirea and are apparently produced in copious amounts.  Perhaps one day our tree will surprise us like our Holboellia, but for now I’ve cadged this image from a blog called Trees of Santa Cruz County, which looks like a terrific resource for anyone wanting to know more about the trees of California.  The only downside to this is tree is that it sheds its old, yellowing leaves in the height of the summer, which can look unsightly for a week or two.

Last but not least we go from tall and skinny Lyonothamnus to short and squat Pittosporum tobira ‘Nanum’.  This versatile, salt-resistant shrub is tolerant of shade and our chalky soil.  Situated in a sunny position it will produce clusters of fragrant white flowers, but in shade the foliage becomes larger and glossier, so it’s a winner either way.  Once established Pittosporum tobira becomes very drought tolerant so perfect for drier sites and containers.   Despite being a dwarf form, in our garden it grows pretty fast, tumbling attractively over the slate walls of our raised borders.  It doesn’t mind a trim, but I do find the branches rather brittle, so tread carefully around your plants if you want to avoid snapping pieces off.  The only other annoyance is black aphids, which can deform newly emerging foliage.

What these trees and shrubs lack in flowers and flamboyance they make up for in style and shape, providing the perfect backdrop for more vulnerable and showy plants.  Go green and give them a go! 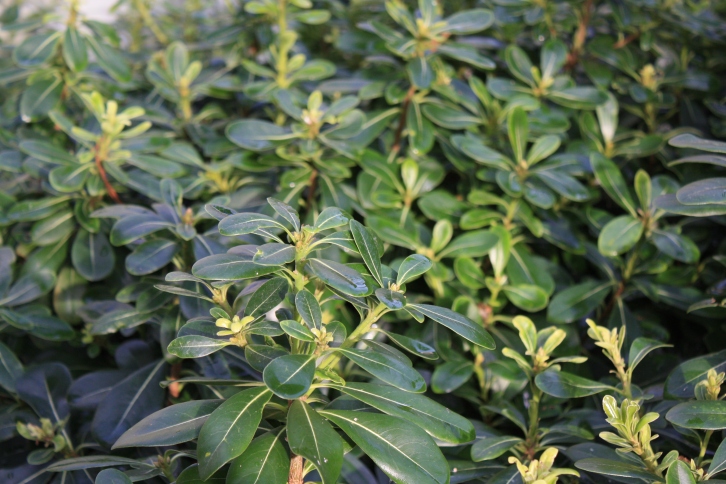 Peonies from The Beau 💗 #peonies #inmydiningroom #cutflowers #springflowers #heartsdelight #everydayisaflowerday
Tomorrow we’ll be planting out our dahlias - over fifty different cultivars - most of them up at the allotment, with the cream of the crop reserved for the garden. If we are feeling bright and breezy we might even make a little video to map their journey from our garden table to their new homes. #plantingdahlias #inmygarden #onmyallotment #gardening #dahliaakita #dahliafirepot #dahlianicholas #dahlialoveofmylife #tubers
Cracking day for a walk in the countryside enjoying the last of the hawthorn and the first of the elderflowers. #elhamvalleyway #maximilliansydneybruiser #countrywalk #hawthorn #crataegusmonogyna #sambucusnigra #elderflowers #kentlife #weekendwalk #crataeguslaevigatacrimsoncloud
Polygala myrtifolia ‘Grandiflora’ - or var. grandiflora - is one of those priceless shrubs that doesn’t get too big or cease flowering. Even in December and January it produces a smattering of flowers, however its big moment is now. It’s looking marvellous in the Gin & Tonic Garden tucked into a sunny corner. Grows very happily in a pot and will withstand drought, although it looks much nicer when kept regularly watered. A pretty shrub for full sun for a good part of the day. #polygalamyrtifolia #inmygarden #thewatchhouse #southafricanshrubs #plantsforpots #droughttolerantplants #unusualplants #sweetpeashrub
The standard of park bedding in Broadstairs may have slipped a long way since the Victorian era, but this crown of echiums on the seafront might well have impressed the young Princess Victoria during her holiday here in 1829. #echiumpininana #victoriagardensbroadstairs #seafront #towerofjewels #blueskies #parkbedding #gardensofyesteryear #thanetlife #kentcoast #broadstairs #englishseaside
Amaryllis ‘Grand Diva’ gracing my desk in the library. #amaryllisgranddiva #monserratlamp #inmylibrary #thewatchhouse #potplants #plantbooks #botanicalillustration #lanterns #panelling #paintandpaperlibraryerica #shadows #antiquedesk #interior #afternoonlight
%d bloggers like this: